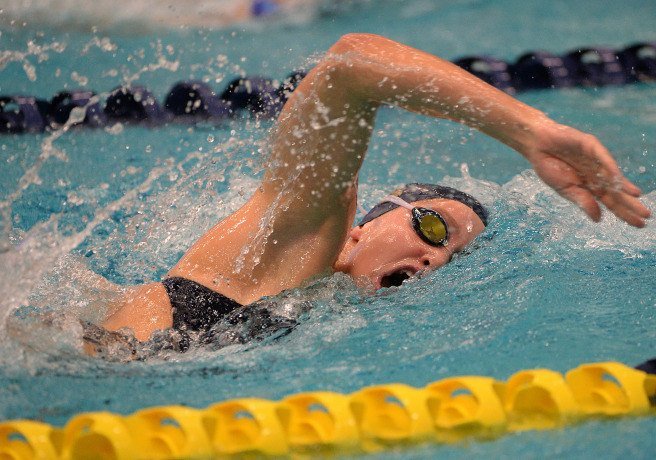 Old Dominion and East Carolina made their way to Annapolis this weekend for a double dual meet hosted by Navy.  The... Current photo via Naval Academy Varsity Athletics

Old Dominion and East Carolina made their way to Annapolis this weekend for a double dual meet hosted by Navy.  The meet was the unplanned season opener for Old Dominion- whose competition was postponed last weekend due to the flooding on the East Coast.

The women for Navy swept both of their dual meets. Head coach John Morrison said in a press release, “We had a lot of big efforts all across the board. The team is showing a lot of spunk for this time of year. They are getting up and racing hard, which is what they do every day in practice.”

To start the meet out, the Navy men took a commanding lead in the 200 medley relay, touching almost 2 seconds ahead of the rest of the field. They did this with a team of: David Carlson, Marlin Brutkiewicz, Jonathan Debaugh,  and Michael Bundas (1:30.45). The second relay of the day, the 400 free, went to East Carolina’s Victor Martins Dos Santos, Shawn Hunter, Michael Dugan,  and Trevor Irish (3:03.80).

On the horizon, both the men’s and women’s teams from Navy will travel to Baltimore on  10/16 to face off against UMBC. The East Carolina Pirates return to action on  10/23 against UNC-Wilmington. Finally, Old Dominion is scheduled to travel to Davidson for a tri meet against Davidson and Marshall over Halloween weekend.