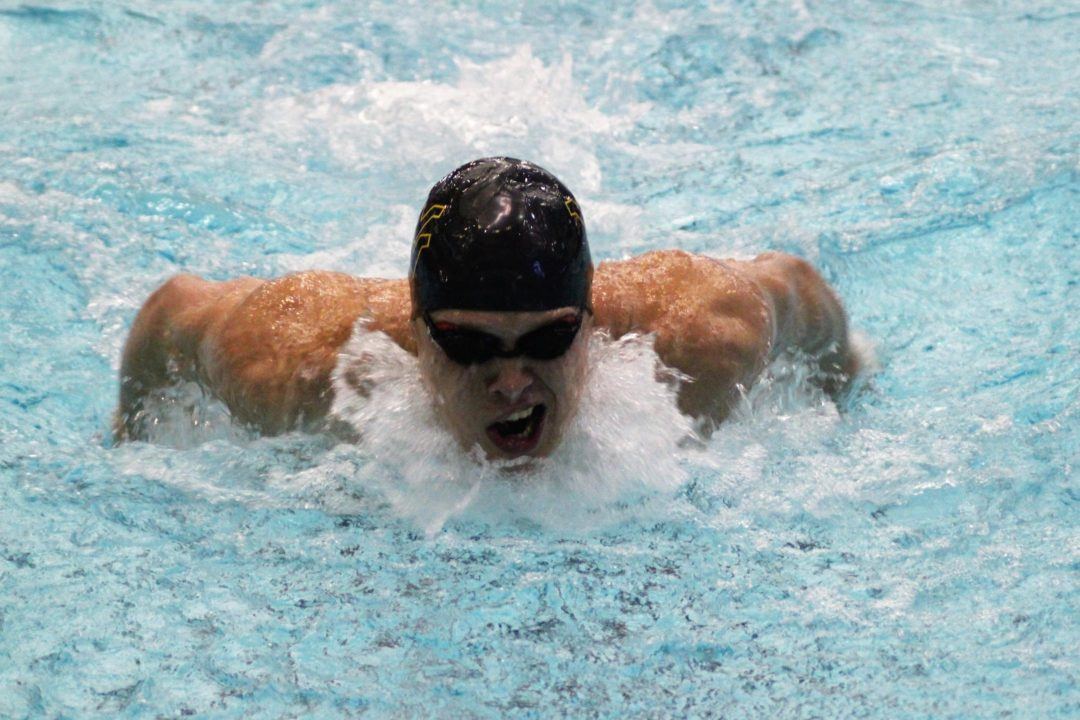 The West Virginia Mountaineers closed out day 2 of the Big 12 vs Big East with a sweep of Xavier and Seton Hall. the final events of the meet were thrilling despite West Virginia being far ahead in team scoring. First, Nate Carr broke the West Virginia pool record in the last individual event of the meet, the 400 IM, going a time of 3:54.86. That time is almost 3 seconds faster than he went at his last meet, the West Virginia State Games, and is his fastest performance ever in a dual or tri meet.

Event winners from day 1 can be found here.

West Virginia combined to win 26 of 30 events on Friday and Saturday. On Saturday, the men claimed victory in six of seven races, while the women won five of seven races.

“Today was a solid session, we weren’t as sharp as last night but got better throughout the meet,” WVU coach Vic Riggssaid. “Our freshmen continue to impress and get better, which is great. Amelie Currat, Emma Harris, Morgan Bullockand Nate Carr all had stand-out swims today, with Nate breaking the 400 IM pool record. Overall we accomplished many of our goals for the weekend, and this sets the teams up very well for the OSU Invite.”

Carr’s record was the second set in as many days, after senior diver Logan McHenry posted a school-record score of 380.80 on 3-meter on Friday.

Along with Carr, sophomore Morgan Bullock and freshman Angelo Russo each posted two victories on Saturday. Bullock earned wins in the 100 butterfly and 200 individual medley, while Russo won the 200 backstroke and 100 butterfly.

Junior Merwane El Merini got the Mountaineers going on Saturday morning with a win in the men’s 100 freestyle thanks to a 45.86. Freshman Sofia Bernard paced the women’s team, placing second with a 52.25.

Senior Amelie Currat followed with a win in the 200 backstroke. Her time of 2:00.73 gave her the victory by more than two seconds. Russo posted his first win for the men, touching the wall in 1:50.86, ahead of sophomore teammate Luke Hene‘s 1:51.32.

The West Virginia men finished 1-2-3 to highlight the 500 freestyle. Sophomore Trayton Saladin led the way with a 4:36.54, winning by nearly four seconds. Freshman Giselle Gursoy‘s 5:02.21 gave the WVU women a victory by 7.80 seconds.

The Mountaineers followed with a strong 1-2-3 finish in both the women’s and men’s 100 butterfly. Russo earned his second win of the day with a 49.77, while Bullock touched the wall in 56.10 to pick up the women’s victory.

Bullock earned her second win of the day as West Virginia earned a 1-2 finish in the women’s 200 individual medley. Her time of 2:05.71 gave her the victory by nearly four seconds. For the men, Carr’s pool record in the 400 individual medley led a 1-2-3 finish.

The tri-meet closed with the 200 freestyle relay, where Xavier claimed victory and WVU placed second in both events. The WVU women posted a 1:37.58, 0.32 seconds behind Xavier, while the men touched the wall in 1:25.93.

Up next for the Mountaineers, the swimmers will compete at the Ohio State Invitational from Nov. 17-19, while the divers travel to Piscataway, New Jersey, for the Frank Elm Invitational.