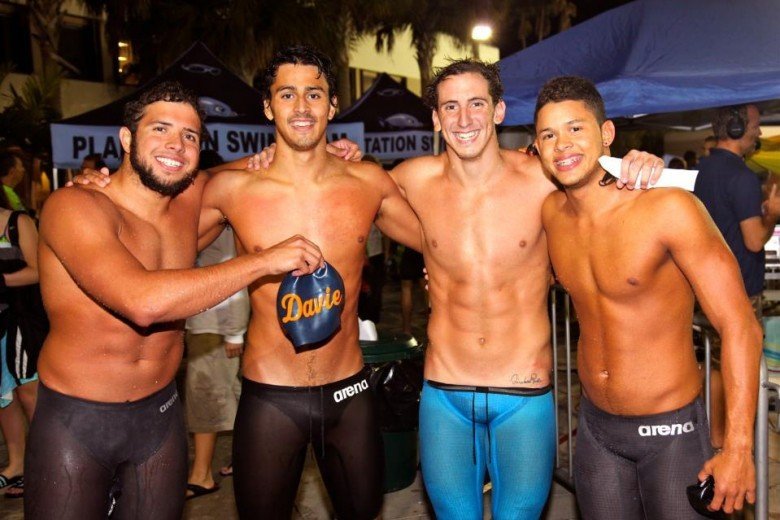 Dylan Carter this winter made probably the splashiest Junior Nationals debut that we’ve ever seen. The Davie Nadadores 16-year old was swimming his first career taper meet after moving to Florida earlier this year from his native Trinidad & Tobago, and proceeded to stamp his name on the National Age Group Record books in his first ever yards-course taper meet.

In his first race, the 50 free, he took 3rd overall in 19.94, which made him the third 16-year old to ever dip under 20 seconds. He missed the honor of becoming the second by mere minutes, as Bolles’ Caeleb Dressel was a 19.82 leading off their relay in the session’s opening event.

Carter’s commitment is to arrive in January of 2014 for the Trojans. He will spend 2013 focusing on training for the Junior World Championships that will be held August 26th-31s in Dubai, UAE, and join USC mid-season next year.

How Dave Salo was able to squeeze another swimmer into this class and shift and dodge his scholarships around is a mystery only he may know. The Trojans only graduate 5 after this season, with the only real big star being Alex Lendrum; perhaps this is a sign that Vlad Morozov is thinking strongly about going pro after this season, which would free up a lot more money.

Peeling through the lists of swimmers who will join the USC roster in the 2013-2014 season shows that they’ve made a move from being a “very good, very top-heavy” team to a team with the depth to contend for national titles. Every single one of them is a bona-fied star, and they are all good to the point where if they’re not huge NCAA Championship meet contributors by the time they’re sophomores, at the latest, it would be shocking.

Carter took visits to Arizona and USC, though he was also considering Michigan, Cal, and Louisville. He is coached by Alex Pussielidi, and is a dual United States/T&T citizen, though he competes for T&T internationally.

so what grade is he currently?

USC’s recruiting class is absolutely insane! Trojans will be competing for the National Championship Title next year…

IF, and I don’t know anything about his situation, he doesn’t have to worry about money, a semester without a scholarship (knowing $ is coming in the fall) would be an easy sell to me. Especially it I was swimming for someone like Salo, who has shown results over all courses, distances, and strokes. If you get to the core of a swimmer and they are all about team and team success, championships AND money isn’t an issue for a family, your job is a lot easier to get that kid. Getting a teenager to weigh the costs and benefits of future success is a tool I’m sure the best recruiters can and will use. I know I would have… Read more »

would it still be an easy sell when a semester of Tuition is $21k..plus room and board is over $30k total