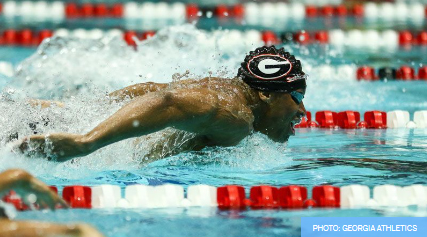 Georgia’s Camden Murphy, a junior from Novi, Mich., recorded 18 points in Georgia’s win over No. 4 Texas A&M. Murphy swept the butterfly events, posting NCAA B-cut times in the 100 (47.27) and the 200 (1:45.54). In addition to his individual victories, he helped lead the Bulldogs’ 400 freestyle relay team to a meet-clinching win, posting a 44.93 split on the second leg. Murphy also swam a split of 20.95 on the butterfly leg of Georgia’s runner-up finish in the 200 medley relay.

Texas A&M’s Kurtis Mathews, a junior from Albury, Australia, swept the springboard events at No. 11 Georgia. Matthews recorded top scores of 398.85 in the 1-meter and 447.53 in the 3-meter.

Auburn’s Alison Maillard, a senior from Houston, Texas, won both diving events to score 18 points for the Tigers in their 202-93 win over Georgia Tech. Maillard earned NCAA zone-qualifying scores in both events. Her 347.55 points in the 3-meter competition was her second-highest score of the season. She also posted a score of 310.50 in the 1-meter.

Florida’s Talia Bates, a freshman from Gainesville, Fla., posted two individual wins and was a part of a winning relay in the quad meet wins over Vanderbilt, Liberty and North Florida. Bates touched the wall first in the 100 back (54.44) and the 100 fly (54.45) and swam a 48.94 split as a part of the first-place 400 free relay.