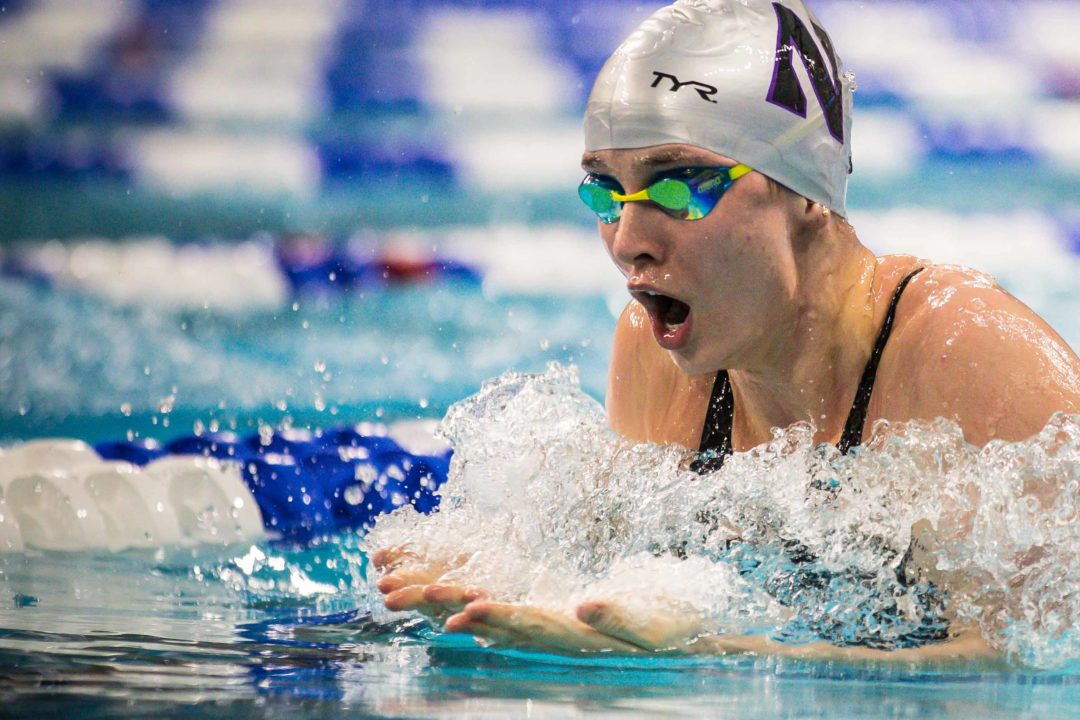 The SMU Classic is always a fun meet, with a unique format (only 8 swimmers + 1 diver per team and only two entries per team in individual swimming events) and a reputation for some very fast (albeit, suited) times for a mid-October meet.  The Louisville Cardinals came into this weekend as the defending champions after having narrowly missed winning the meet each of the previous two years, but they’re sitting four points behind Auburn after the first day of the competition.

Louisville got things rolling today with a 3:34.15 in the 400 medley relay. Northwestern kept things close through the first half, but the Cardinals pulled ahead with Grace Oglesby‘s 51.45 fly split and Lainey Visscher‘s 48.78 anchor. Auburn’s Claire Fisch was the only anchor under 48, closing in 47.63 to propel Auburn to a 3rd-place finish (3:36.31) behind Northwestern (3:35.47).

Last year, Louisville opened the meet with three straight wins, but Northwestern’s Calypso Sheridan put a quick end to the Cardinals’ streak tonight by scorching a 4:05.33 in the 400 IM. It was initially a tight race between Sheridan and Louisville’s Maria Sumida, but Sheridan dropped the hammer by splitting 1:09.14 on the breaststroke leg. Sumida ended up taking 2nd in 4:11.83, and no one besides those two has been under 4:13 yet in this still-young season. Louisville’s Sophie Cattermole, last year’s champion, won the consolation final in 4:13.75, about two seconds slower than last year’s time.

The Tigers made it two in a row with Fisch’s 22.41 victory in the 50 free. Yet, teammate Julie Meynen actually had the fastest overall time, as she touched in 22.05 in the consolation final. That’s the fastest time in the NCAA this season, and is the same time as her 6th-place finish from last season’s SECs.

Notably, Openysheva took 2nd in the A-final (22.84), despite having just competed in the 200 free minutes before. Auburn would then earn its third-straight win as Alison Maillard took the 1m diving event with a score of 279.50.

Oglesby broke Auburn’s streak by taking the 100 fly in 51.62, good for the 2nd-fastest time in the country so far this season, and closing Louisville to within one point of Auburn.

Sheridan then won the 100 back with a 52.85, also the 2nd-fastest in the NCAA this season. At this point, Auburn and Louisville were tied with 130 points each. That tied continued through the next event, as Northwestern’s Hannah Brunzell won the 100 breast with a time of 1:00.06, almost half a second ahead of Astashkina.

Heading into the final relay of the night, the 800 free relay, Auburn and Louisville were tied at 147, with Northwestern close behind at 139.