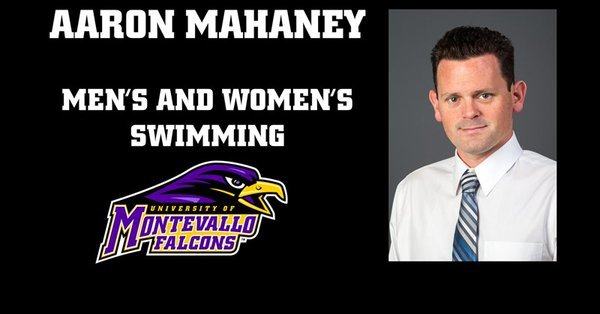 MONTEVALLO, Ala. – The University of Montevallo Athletics Department is pleased to announce Aaron Mahaney as the first head coach for the Falcons’ men’s and women’s swimming programs.

Mahaney most recently served as the associate head coach at the State University of New York at Buffalo, a NCAA Division I institution in the Mid-American Conference.

“It was important to get a leader who can get the programs off the ground,” said Montevallo Athletic Director Mark Richard. “We found our coach in Aaron Mahaney and we’re excited to get him on board and recruiting for the first season. Aaron possesses all of the important characteristics needed in a head coach to lead these swim programs.”

Approved by the University of Montevallo Board of Trustees in February, the Falcons men’s and women’s swimming programs will compete in their inaugural season beginning in the fall of 2019 with Mahaney as the head coach.

“I want to say how thankful I am to Montevallo for this incredible opportunity,” Mahaney said. “It is exciting to add a new sport and to be a part of a growing athletic department. I am looking forward to getting started and spreading the word about #MontevalloSwim.”

During his tenure as an assistant coach at Buffalo, Mahaney has worked hard to improve the reputation and excellence of the Bulls swim teams and more specifically, the long distance swimmers. In the 2013-2014 season, Mahaney helped lead the group to five individual MAC titles as well as six school records. In the 2014-2015 season, he coached the women’s team to five individual MAC titles as well one school record in the 800 freestyle. In his 2015-2016 season, Mahaney focused his efforts again on the distance program which yielded him two MAC individual titles and a school record in the 800 free relay.

While at Penn State, Mahaney was able to help the Nittany Lions advance to the NCAA Championships each year and saw the women’s team finish among the top-40 three times and the men’s squad grab top-30 finishes twice at the national meet. On an individual level, 21 of his student-athletes have garnered All-America honors on 54 occasions.

Prior to his time at Penn State, Mahaney served as the assistant coach at the University of Hawaii during the 2005-08 seasons. While at Hawaii, he coached distance freestyle, butterfly and individual medley events. Mahaney started his coaching career at Lafayette College in his hometown of Easton, Pennsylvania.

Mahaney spent the summer of 2014 and 2015 as a coach at the United States Swimming National Open Water Camp held in California and Florida. At both of these camps, he was the assistant coach for the top 24 distance swimmers in the country.

A graduate of Michigan State University, Mahaney was a four-year letter winner for the Spartans and was named the program’s Freshman of the Year in 1999 and was the team’s Most Valuable Performer in 2002. He has competed at the 2000 and 2004 US Swimming Olympic Trials, placing 18th in the 200 butterfly in 2004 while swimming for Atlantis Aquatic Club.

What a great hire, best of luck!!

What a great hire for this new program. Congratulations, Aaron. I know you’ll do a great job at Montevallo. Don’t let them make fun of your eastern PA accent down there.

Aaron congratulations and best of luck!