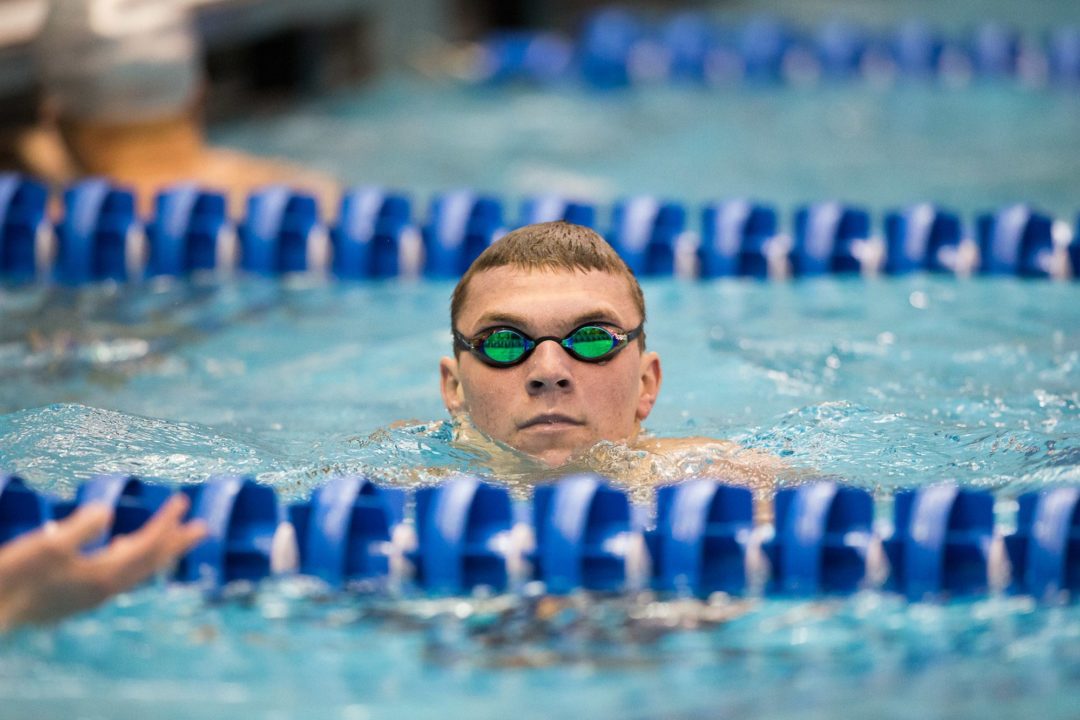 The Mitty girls avenged their 2013 second-place league finish by beating last year’s champions St Francis by 19 points. Mitty’s depth was a big factor, as were their wins in three relays, three individual swimming events and the diving.

The girls’ meet showcased a lot of younger talent this year. In most events, the majority of championship finalists were freshmen and sophomores. There was only one event in which there were more than two seniors in the top eight.

Mitty set the pace right away with a record-breaking win in the girls’ 200 medley relay. The very young team of Joyce Lin, Morganne McKennan, Lauren Smith, and Camille Hui went 1:46.16, erasing the old WCAL record by nearly a second. Presentation’s Mackenzie Kirk, Grace Leonis, Chloe Isleta, and Audrey Berner were also under the previous record, by .01, with their 1:46.94.

Marie-Pierre Delisle, who has committed to swim at UCLA in the fall, led a trio of Mitty girls to a sweep of the 200 IM. Delisle won in 2:04.58, a half-second off her sister Laurence Delisle’s WCAL record time. Teammates McKennan and Lin took second and third.

The 100 fly was mostly a St Francis vs Mitty affair, with each school placing three in the top eight. The win, however, went to Presentation sophomore Chloe Isleta in 55.06. Runner-up was last year’s champion and record-setter (55.02), Delisle of Mitty. Roslyn Liu of St Francis took third.

Presentation’s Isleta lowered her own 2013 WCAL record in the 100 back by 1/100 winning in 55.09. Mitty’s Lin and Heather Stanbury finished second and third.

Morganne McKennan of Mitty broke a 2004 WCAL record in the 100 breast, getting the win in 1:03.10. Fully six of the top eight in the 100 breast were freshmen, including second- and third-place finishers Leonis (Presentation) and Lauren McNevin (St Ignatius).

Mitty closed out the meet the way they’d begun, with a relay title. Shimomura, Julia Read, Cassie Nguyen, and Hui combined for a winning 3:34.56, comfortably ahead of St Francis and Presentation.

The boys’ meet was just another day at the office for Bellarmine Prep, who has won the WCAL league championships every year for the last 34 straight and CCS for 29 of the last 32 years.

Despite St Francis’s star power with the likes of Stanford-bound Curtis Ogren and Benjamin Ho, St Ignatius was able to field the depth it needed to take second by a 24-point margin over the Lancers.

Like the girls’ meet, the boys had a surprisingly small number of seniors placing in the top eight. However, most of the individual event titles (five swimming and the diving) went to seniors.

St Francis started things off with a bang winning the medley relay in WCAL record time. Lowering their own 2013 mark by .54, Ho, Ogren, Gautham Bommannan, and Sean Elmurib went 1:34.39 to claim victory by nearly three seconds. Junipero Serra touched out St Ignatius by .05 for second.

Because one record wasn’t enough, sophomore Ho followed the relay up with a best-ever WCAL 200 free, touching in 1:39.50. Bellarmine showed off its incredible depth with four in the top eight, including second- and third-place finishers, juniors Aidan Burns (1:40.35) and Cooper Burrill.

St Francis won its third event in a row when Ogren destroyed the field in the 200 IM. Although he missed lowering his own WCAL record by .16, Ogren nonetheless won by nearly 6 seconds touching in 1:49.46. Bellarmine junior Michael Messner picked up points at second, while Joe Kmak of Serra took third.

St Ignatius picked up a slew of points in the 50 free with four championship finalists, including first- and third-placed Stefan Kranenburg (21.61) and Clark Sun (21.81). St Francis’s Elmurib (21.75) snuck in at second.

Bellarmine junior Aidan Burns led three of his teammates in the final of the 500. Burns’s 4:39.56 landed him in first, while the Bells picked up points with fourth, fifth, and eighth places. St Ignatius took second and third thanks to freshman Nick Cruse and sophomore Griffin Burke.

St Ignatius got to the wall just ahead of Bellarmine in the boys’ 200 free relay, both finishing over a second ahead of St Francis. Sun, Clark, John Paul Naughton, Sheldon Boboff, and Kranenburg combined for the 1:26.36 win.

Ho of St Francis scored a double when he won the 100 back in 49.96, .39 away from the WCAL record he set last year. Mitty junior Jordan Vega took second; Bellarmine sophomore Patrick Kirk was third.

There is an error with the Presetation Medley Relay. Camille Hui from Mitty is listed under the Pres relay. The fourth girl was Audrey Berner.