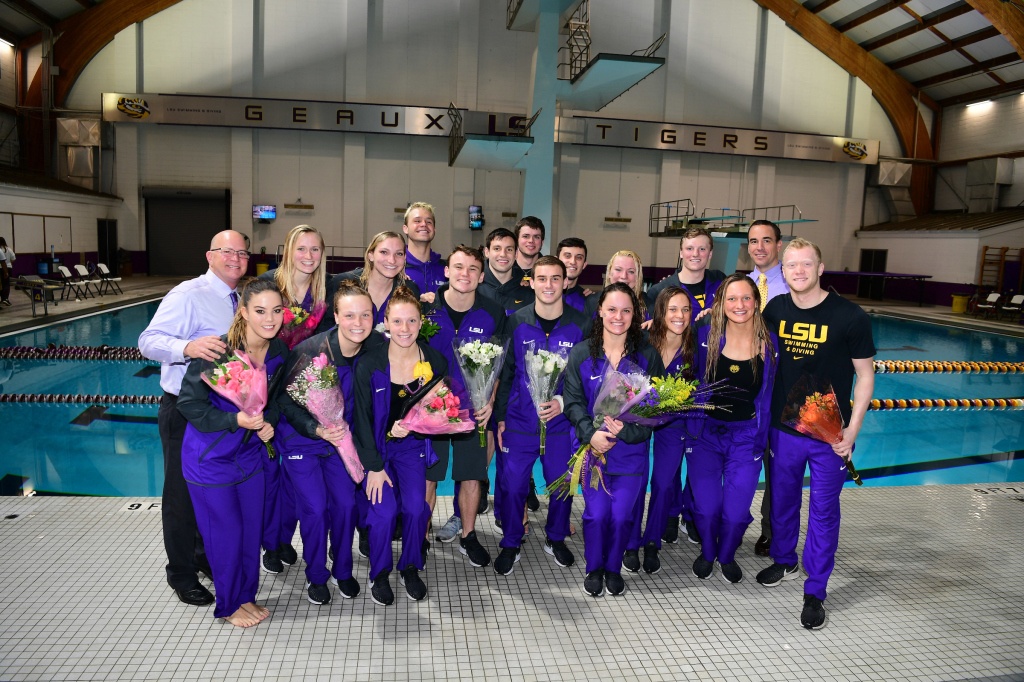 It was senior day in Baton Rouge, Louisiana, and the Tigers men and women defended their home pool to the turn of 27 wins in 32 events.

“I think it was a great meet for us,” said LSU swimming head coach Dave Geyer. “We haven’t raced in a dual meet since early November so to get those competitive juices flowing again was good. We showed a little rust in some of the details but that is something we can definitely work out going forward.”

Mitchell Petras carried the torch for the LSU men (and seniors) when he swept the breaststroke events and set two lifetime bests. First he won the 100 breaststroke in 55.31 – his previous best was a 55.95 from 2015, when he was still a senior in high school.

He followed that with another win, and another lifetime best, in the 200 breaststroke, swimming a 2:01.05. That improved his previous best time, from last season’s SEC Championships, by almost 2 seconds.

Delta State picked up their only win in the men’s 100 fly, when Giulio Brugnoni beat out LSU freshman Michael Petro 48.89-49.81. Brugnoni is the 5th-ranked D2 butterflier in the country so far this season, and his time from Saturday is the division’s 3rd-fastest of the new semester so far.

“I think it was a great meet for us,” said LSU swimming head coach Dave Geyer. “We haven’t raced in a dual meet since early November so to get those competitive juices flowing again was good. We showed a little rust in some of the details but that is something we can definitely work out going forward.”

Seniors Gabrielle Pick and Summer Spradley both picked up wins as Spradley won the 100-yard breaststroke with a time of 1:03.11. Pick won the 200-yard butterfly with a time of 2:01.05.

Kate Zimmer and Tennyson Henry also won on their Senior Day. Zimmer won the 100-yard backstroke with a time of 56.03. Henry won the 500-yard freestyle by seven seconds with a time of 5:02.78.

Seniors Matthew McClellan and Matthew Phillip both dove for the final time at the LSU Natatorium. McClellan finished second and third on the three-meter and one-meter, respectively with scores of 380.10 and 307.85. Phillip finished third and fourth on the same events with scores of 360.20 and 296.35.

Freshman Aimee Wilson also broke a pool-record as she set a new personal-best on the three-meter with a score of 373.85. This was Wilson’s first win in her collegiate career.

“Today was great,” said LSU head diving coach Doug Shaffer. “I told the athletes that we are exactly where we needed to be going in. We were pushing and challenging ourselves and in result, we set three pool records. Juan set the one-meter and three-meter records and Aimee Wilson broke through for her high performance of the season.”

“It’s all about transferring the culture baton, if you will,” said Shaffer. “The underclassmen learn a lot from the seniors and our seniors have done an amazing job at showing them the right way to carry yourself and the right way to be a part of this program. So, there is not a lot of coaching when a new class comes in because the standard has been set by the senor classes that have come and gone. They have done an amazing job of showing them the LSU way.”

GOLD IN GEAUX(LD) COUNTRY
Two student athletes produced notable performances for the UIW men, Hector Ruvalcaba Cruz and Leonardo Sanchez, racked up quick first place finishes for the Cardinals.
Sanchez snagged first in the men’s 200 Freestyle finals, finishing with a time of 1:40.66. Next, it was H. Ruvalcaba Cruz’s time to shine against the quick LSU squad, dominating in the men’s 200 Butterfly with a time of 1:48.02, the 500 Freestyle with a finishing time of 4:33.86 (Sanchez touched third in 4:40.75) and the 200 IM going 1:51.36.

THE MEET
UIW’ women kicked off the day with a solid fifth place finish in the 200 Medley relay, with the team of Natasha Fung, Mariana Ruvalcaba Cruz, Cassandra Phillips and Kaylee Brawner finishing in 1:47.40. The men also took fifth, with the squad of Christopher Lestage, Jon Taylor, Roberto Pinedo and Garrett Hollcroft finishing in 1:35.66.

Pushing each other to rack up Cardinals points, Leonardo Sanchez and Beau Fusilier took top ranks in the men’s 200 Freestyle, coming in first and second with respective times of 1:40.66 and 1:40.88. Fusilier would later go on to grab another silver in the men’s 100 Freestyle, finishing in 45.97.

M. Ruvalcaba Cruz solidified third place for the Cardinals in the women’s 200 IM with a time of 2:08.57, while her brother had another gold moment in the men’s event, soaring to take first in 1:51.36.

His third first-place finishes on the day for H. Ruvalcaba Cruz happened with a dominating 500 Freestlye swim, finishing in 4:33.86. This was over four seconds faster than the LSU swimmer who came second in the event.

In the 100 Backstroke, Fung came in seventh for the women in 59.40, faster than her swim the last time out. Vladyslav Chumak took fifth on the men’s side, touching in 50.57. Chumak showed out in the 200 Backstroke, securing a third place podium finish in 1:50.88. Aaron Moran touched right after to place fourth with a time of 1:51.58.

Kara Neel embodied “going the extra mile” in the women’s 1650 Freestyle, finishing fourth with a solid time of 18:15.13. Cardinal Oscar Cardenas also took on this race for the men, finishing fourth in 16:46.71.

For diving, UIW’s squad stood tall to the LSU roster, with Ana Lucia Garza taking fifth in 1M with 210.25 points and fourth in 3M with 236.85 points. For the men Timothy Newton topped the Cardinals in 1M to take sixth with 240.55 points, while Dawson Martinez racked up 278.95 points on 3M.

The day closed out to have UIW’s women relay teams take third and fourth in the 400 Freestyle relay, with respective times of 3:37.67 (Miller, Demchenko, Magda Vega Vidal and Rowley) and 3:40.26 (Phillips, Brawner, Lauren Gray and Taylor Steele). On the men’s side, the relay team of Sanchez, Fusilier, Moran and Christopher Lestage turned the race into an absolute nail-biter, with Lestage coming close to out-touch the Delta State relay only to be narrowly edged by 0.2 seconds. The men took second with a time of 3:04.27.

UP NEXT
The Cardinal men’s and women’s teams next time out is slated at home, hosting Old Dominion University on Jan. 26. The meet will be held at the Ann Basrshop Natatorium, while the schedule is TBD.