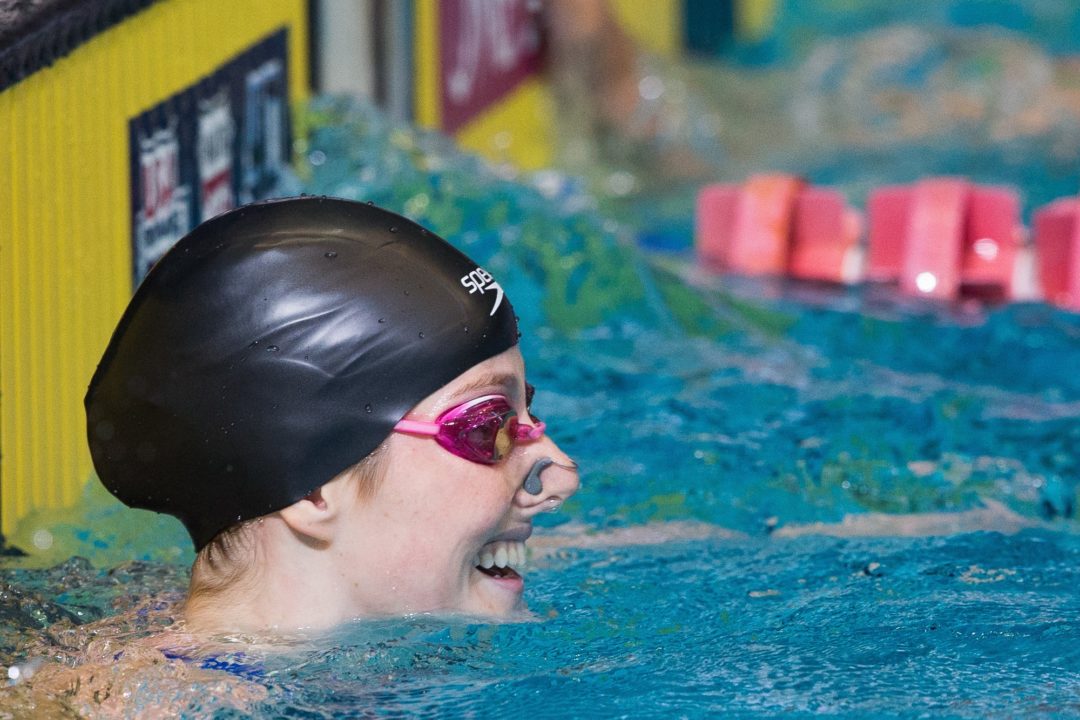 Despite media reports, Missy Franklin will be entered in the 50 backstroke for the World Championships. (Photo: Tim Binning/TheSwimPictures.com)

In the latest move in a game of hot potato, the NCAA Board of Governors passes the buck on transgender participation policy, voting in support…

USA Swimming has confirmed a few more spots for the 2013 USA Swimming World Championships that will take place in Barcelona at the end of July.

They affirmed the selection of Karlee Bispo to swim as a part of the 800 free relay and Katie Ledecky’s scratch from the same event. They also confirmed that Shannon Vreeland from Georgia, who was 3rd in the 200 free behind Ledecky, would take that individual spot.

Other new announcements include adding Matt Grevers and Kevin Cordes officially to the second spots in the 50 backstroke and 50 breaststroke, respectively. Both swimmers finished 2nd in those events, but it was on the basis of their 100 meter finishes (Grevers was 2nd in the 100 back, Cordes won the 100 breast) that they earned these swims. Neither was a great surprise.

Nor were the additions of Michael McBroom to the men’s 800 or Chloe Sutton to the women’s 1500. They were runners-up in those races, and were the logical choice to swim them.

A bit more uncertain was who would swim the second spot in the men’s 50 fly, and that will go to Grevers as well after finishing 2nd in the 50 fly, giving him 5 events in total. Ryan Lochte, who was runner-up in the 100 fly, would’ve had the first shot at the 50 fly, but it would seem he declined it.

Missy Franklin, despite media reports to the contrary, is entered in the 50 backstroke. That gives her 5 individual events, and a triple on the meet’s 5th day (Thursday) with the 100 free semifinal, the 50 back final and the 800 free relay final.

Breeja Larson was confirmed as the second 50 breaststroker, Dana Vollmer will be the 2nd 50 butterflier on the basis of her win in the 100 fly (which makes her scratch in the 50 at Trials look genius).

The full roster can be seen here. No additional athletes can be entered in the meet, though events could theoretically change before the final FINA deadline.

So, the new additions in summary:

Wow! If the US relay wants to have a little chance to win against Australia, it’s not the best idea for Missy to swim 2 races just before. She has to be at her best. I know she’s a beast but she’s first human. The 100 free semi-final is enough. And in the 50 back she has no chance to win with her bad start.

hey Bobo while you have a really good point on Missy needing to be at her best for the US to have a chance to do well vs the Aussies in the 800 free relay, i believe she will step up for the big occasion as will Katie & the rest of the squad.

the 50 distance seems to just wake Missy up and gets her going for subsequent races like what happened in Shanghai in 2011 (and she did place 3rd which isnt all that shabby). so i dont think it will take all that much out of her with how the Barcelona schedule is ordered.

as for no chances to win the 50 back, it will be really… Read more »

I agree with EmilyR – I think Missy will have to be at her best, and I agree that her 50 will likely be a great warm up for her 200. Recall her ridiculous double at London, and that was a WAY harder double to pull off.

For her 50 back, I have a feeling that Teri will work on her under waters again, just like they did at the Olympic training camp. Remember how much better they were at the Olympics than at Trials? With that extra work, I think there is a distinct chance that she will get on the podium, and has just as good shot to win as anyone.

And I also don’t think that… Read more »

Why can’t Missy have a chance to medal in 50?

Have you forgotten that in 2011 when she was less strong and her start was worse, she won bronze?

And I don’t believe swimming 50 back would affect her much.

I cannot believe you have so little faith in Missy.

Remember last year before Olympics when you claimed that Missy should drop all her free to focus only on 100/200 back?

And I said no, Missy’s free would not affect her back and Missy should swim all 4 individual events.

See who was right.

And now you are doing the same thing again. I have no doubt from now on until Barcelona you will keep going on and on about how Missy should drop 50 back. 🙂

Again remember that US swimmers grow up on repeating swims in one day and have gone thru sonetimes long meets and go multiple events. It is part of the “tide” that many of them have. It is something see that we are able to fill all the event spaces as we have basically done for the past 100 years without regard if you will place or not. Nice to see a fair system without the committee process that others have. It iscwhatbhelps keep up the interest and producing of swimmers even in down times ( not many) the results bounce right back. I would think as top swimmers look at it they they probably appreciate it.
As a coach… Read more »

Ledecky will really need to step up for that relay in case Missy isn’t on her top form at the end of that tough session. If Ledecky and Missy can split 154/155 and other 2 swimmers are 157ish, USA will be golden.
I think Australia will have 154 and 3x 156. So if US can get Missy AND Ledecky at 154 range, US will be in good spot. I think France could also be a threat but they only have Muffat as their 154 or faster swimmer. If Ledecky and Missy get down to fast splits, US will be awesome. Too bad Schmitt isn’t at top form or else that relay would be reall scary, but I guess we… Read more »

Missy always delivered in the relays.

In all her international competitions, Missy’s relay swims were never slower than her individual swims.

Also,
– an australian will not swim 1:54. Barratt and Palmer will swim around 1:55 (and probably Elmslie too) and one or two others on 1:55
– Missy may swim 1:54, but Ledecky will not swim 1:54. Ledecky may swim 1:55 (with relay start).
– France will not be a threat to USA-AUS, China has stronger claim to bronze than France although France may steal bronze (it is so hard to predict China when there’s not much results we can read from their swimmers so far)

•Katie Ledecky scratches individual 200 free. That’s good, she has enough already and after doing the great 1500 at nationals. Anosther Debbie Meyers swimmer more so than Janet Evans, since she can swim 200 almost as well as 1500.

Could Ledecky win 200 medal in Barcelona?

In a few years, she will definitely be a force in the 200. but this summer I agree, she doesn’t have a chance.