Missy Franklin Back in the Pool After Double Shoulder Surgery 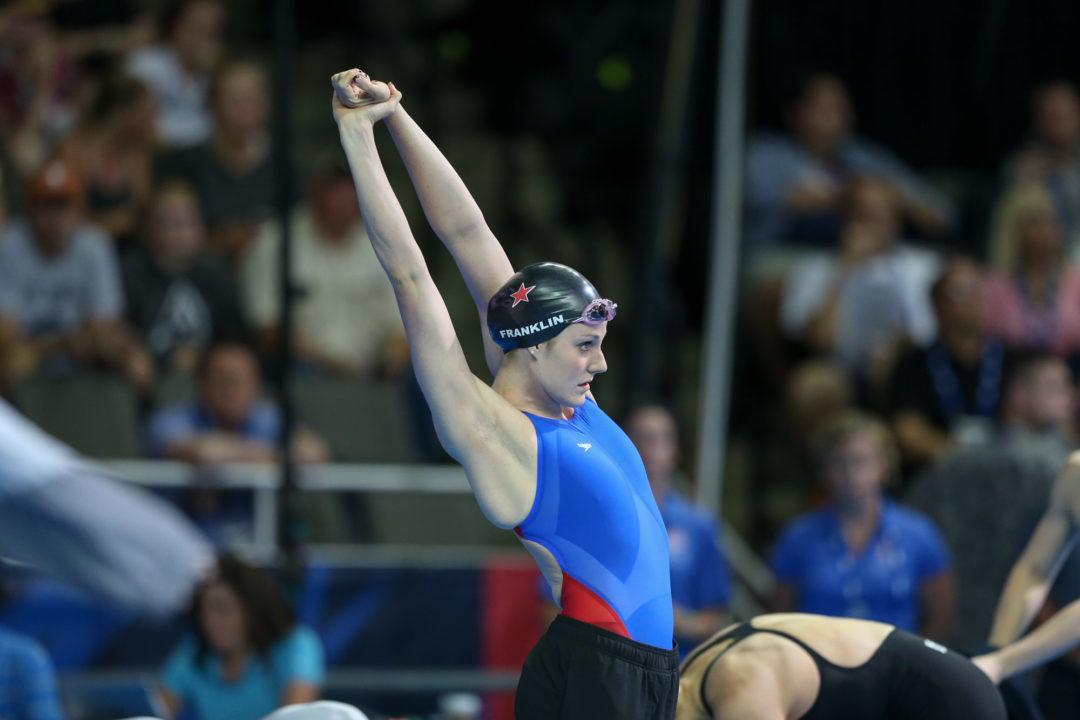 Missy Franklin made an announcement today about her career on Twitter. Archive photo via Tim Binning/TheSwimPictures.com

Missy Franklin‘s career has been marred by adversity these last several years. In 2014, it was back spasms that kept her from performing to her full potential, and she continued to struggle in the years that followed. The once-bubbly teenager, who took the world by storm and set the world record in the 200 back in 2012, was not the same.

Franklin faced ultimate disappointment this past summer, looking sluggish at the Olympic Trials. She was only able to qualify for Rio individually in two events, the 200 free and 200 back, and also qualified to swim the 800 free relay. Franklin watched on in the 800 free relay finals after a lackluster prelims swim that left her off the 800 free final at night. The Americans would go on to win gold in that race, while Franklin stumbled and was unable to make the Olympic finals of either of her individual events.

Franklin hasn’t raced since Rio, and she’s been quiet since opening up about her disappointment from last summer. Still, she is back in the pool. According to a tweet posted by her today, she underwent surgery earlier this year on both her shoulders for bursitis after a January MRI. This surgery removed excess scar tissue that had built up in her shoulder, and now, according to “Doctor and Coach’s orders,” she’s taking it easy.

Franklin mentions that she is still back in the pool “in limited training” but won’t be racing quite so soon. She’s determined to bounce back, although her return to competition is unknown yet. View her tweet, with the full announcement, below.

I love you all so so much and can't thank you enough for being a part of this journey with me? pic.twitter.com/PmZ9IbpYIF

Franklin also made a longer caption on her Facebook page with the same announcement. She thanks her fans for supporting her, and gives a special shoutout to her “Bear Bros and phenomenal coaches,” referring to her training group at the Cal. Additionally, she alludes to more swimming statements to be made in the future: “I’m so far from being done with this sport.”

In case anyone had any doubts or had forgotten, Missy still loves everyone. She loves everyone because they love her. She’s so grateful for all the love.

Maybe all the loving thoughts will heal her shoulders (and her confidence) and she will get the Missy Mojo back.

Everyone loves a happy ending, right?

The happy ending is usually when an athlete retires on top. I certainly wish Missy a miraculous recovery and that her swimming career be fulfilling. I also hope she is not expecting very much in terms of being competitive with the best in the world. Her time is past.

Why is it only a happy ending when an athlete retires on top? The happy ending is when they retire when they WANT to retire. When Tom Brady was asked when he would retire he said, “When I suck”. If that’s what he wants good for him.

Yes, her interviews tend to be a little overly sweet and syrupy, but come on……she’s a phenomenal athlete and seems like a genuinely nice person. Hope to see her back to full potential soon.

How does Mark’s posting merit 34 thumbs down? I cease to be amazed at the amount of haters online. Shaking head slowly.

I sensed a tone of hating and irony in Mark’s post. I think some others sensed this as well.

Only in America are six medals (five gold, one bronze) in two Olympic Games considered by some naysayers a disappointing underachievement! Here’s wishing Missy Franklin recovery in every way that heals her!

failing to final in her two events at Rio was a disappointing underachievement. people tend to only remember what’s recent, so her London performance is basically forgotten

I don’t think anyone considers her career to be an underachievement. Many people, including Missy herself, consider Rio to be a disappointment. And I can’t imagine there isn’t anyone who doesn’t want to see her back on top again.

I think people are referring to her Rio performance. Of course if you add her London medals it’s not an underachieving but no one is trying to say that..

It depends on the potential of the particular athlete whether it is disappointing or not.

All my best for a swift recovery for Missy.

Who puts a thumbs down on a comment wishing someone a recovery from an injury?

When a poster tosses out the inevitable ‘best wishes’ to a famous person, it can be construed as egocentric. Fact is, she doesn’t know the poster exists, and so one might reasonably think that post is really just a ‘look at me; I care’ kind of thing. All about the person posting.

Nice to have a bit of a break from the Missy interviews.

You know you could just not watch them, right?

Best wishes for a complete recovery for Missy.

The 2017 Women’s NCAA 200 Free final reminds me of how special of a swimmer Missy is. All of that talent pushing each other, and still they were not within a second of Missy’s record.

Excellent point! It is sad how swimming is so Olympics-centric. Her last season at Cal at NCAAs was amazing. Not to mention her accolades as a student athlete at the top public university in the US. It just seems like these important and noteworthy accomplishments don’t get noticed. Missy is a champion and awesome person.

I am surprised that this 1:39 hasn’t surprised you. This time is well out of reach for such aces in swimming like Simone Manuel, Allison Schmitt and Katie Ledecky – Olympic gold medalists who are quite capable of swimming record times at 200 yards
This result could be achieved if she was in best ever form. But nothing else besides this particular race indicated that. She wad just good at backstroke, freestyle sprint and 500free. There is some popular opinion that Missy Franklin can concentrate and deliver when it matters. But just a few months later she failed to do so in Kazan at her key disciplines. Interesting that as many people stated here she actually hasn’t focused on… Read more »

But what about her degree?

Missy was doing great until her back spasms, then she seemed to lose the flexibility on her starts and underwaters. I would love to see Missy get back in form and have some good races with Emily, Kathleen, and Kotinka.

Yes – I wonder if the shoulder issues were a domino-effect from losing flexibility elsewhere.

That amazing 1:39 200 free was after her back spasm issues, though. Clearly something else was bothering in the run up to trials and Rio. Now we have a very plausible physical explanation.

I wish her the best, but she really isn’t a major factor for Team USA anymore. Despite her absence USA got silver in the 100 back and gold in the 200

Well yeah, but if she’s healthy she could certainly be a player, at least in the 200 and maybe 200 free. Tough coming back from injury but she’s only what, 21? And just two years out from top-level performances.

She did go a 1:39.10 in 200 free short course. Especially with walls never being her specialty, very impressive. We just saw 3 top level female athletes go 140.

Two of the three are multiple time gold medalist

Exactly what I was thinking. She doesn’t even have to get back to her best to be our best option for the 200 free.

If she gets back to her best, she will be a factor in these events for team USA.

But that gold medalist in the 200 has since retired.