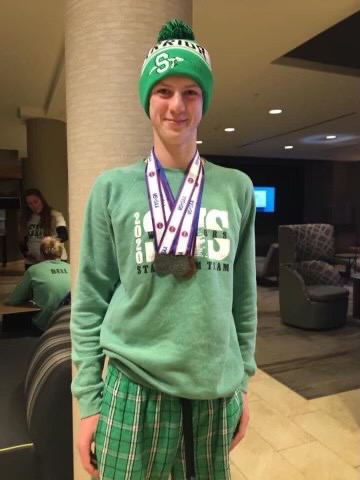 The family of Kolby Ruff, an active high school and club swimmer from Smithville, Missouri is looking for assistance following a severe crash on Christmas Day that left Ruff critically injured.

According to police reports, while driving eastbound on Missouri intrastate, Ruff’s vehicle traveled onto the right side of the road. When he attempted to correct his position, he collided with another car. As a result of the collision, both Ruff and the driver of the other car were taken to North Kansas City Hospital with serious injuries. Ruff was later relocated to Children’s Mercy Hospital in Kansas City, where he was diagnosed with a severe traumatic brain injury.

Two days later, Kolby’s older brother Kyle was also involved in a serious car crash. However, his injuries were limited and he did not need treatment.

Kolby Ruff is currently in recovery at the hospital, but remains unconscious. Once he is stable enough to travel, he will move on to long term rehabilitation. Several family-friends have put together a fundraising effort, with more information available on Ruff’s Facebook page: “Kolby Ruff – Kolby STRONG”.

Ruff, who is currently a sophomore in high school, is a member of Club North Swimming of Kansas City and the Smithville High School swim team. At the Missouri State HS Championship meet, Ruff finished 2nd in the 100 freestyle and he also came away with 2nd, 3rd, and 5th place finishes as a member of Smithville’s relays.

$20k tab to cover “some” of his medical expenses, family must rely on the success of a GoFundMe page to avoid crippling debt. The US healthcare system is revolting.

But remember, asking for anything better is sOcIaLiSm (ﾉ◕ヮ◕)ﾉ*:･ﾟ✧*:･ﾟ✧

Lord be with them.

We pray for full recovery! Ask for miracle