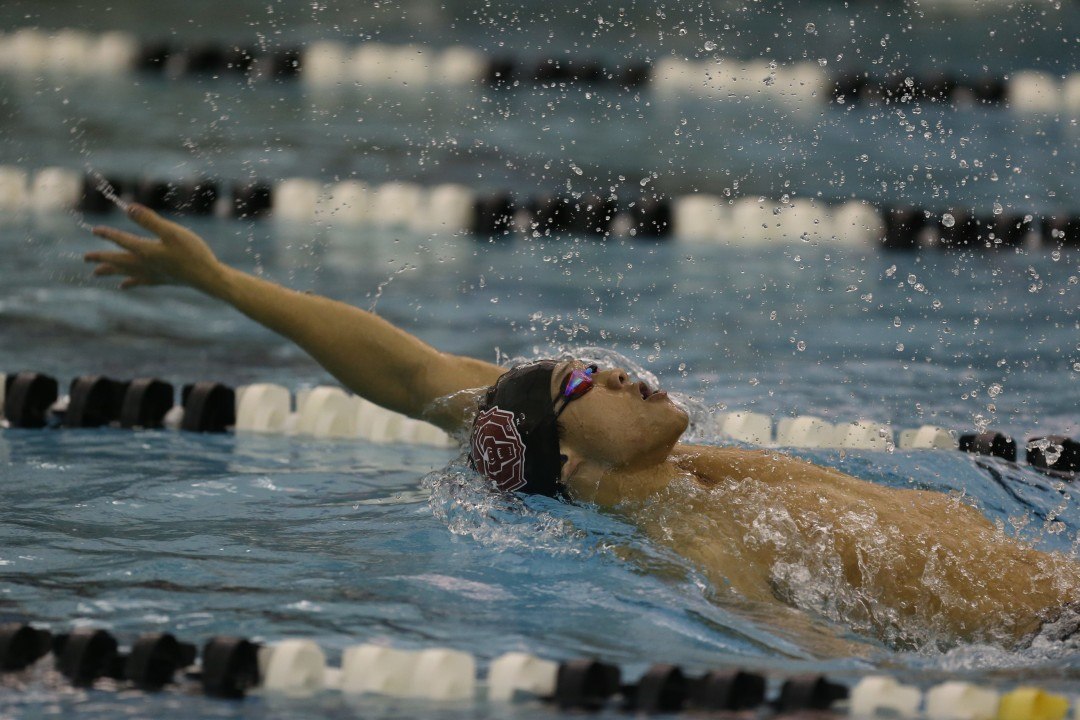 Last Night’s 200 IM winner, Uvis Kalnins (Missouri State), raced against the clock to finish well ahead of the field in the 400 IM tonight. Kalnins set the MAC Meet record with his 3:47.38 last year, but his 3:46.00 tonight was well under that. This was a very strong event for Missouri State with Miguel Davila (3:52.09) and Ethan Bresette (3:53.65) claiming the next two positions behind Kalnins. The Bears were also able to place swimmers in 6th and 7th (Christopher Heye-3:58.16 and Brandon Weissman (3:58.29). This event would push Missouri State up to a 16.5 point lead over EMU.

Coming into the meet Joao Facciotti (SIU) was seeded 9th in the 100 fly. After prelims he was able to work his way up to 3rd, and then he exploded to the win in finals with a 47.35. The freshman would end up dropping 3.26 seconds from his seed time today. Vitalii Baryshok (MOST) finished in second when he stopped the clock at 47.86. University at Buffalo freshman Oliver Patrouch was close behind with his 47.92.

In his second individual event of the meet Till Pallmann propelled himself to another victory Pallmann ran away with the victory in last night’s 500 free, but tonight’s race ended up being more of a challenge. His 1:35.15 was under his 1:35.45 MAC Meet record that he set leading off SIU’s 800 free relay on Wednesday night. EMU’s Andrew Henry made things interesting with his 1:35.24. Pallmann was trailing Henry up until the final 50. Henry’s 3rd 50 was the fastest middle 50 of the field, but he didn’t have enough gas in the tank to hold off a charging Pallmann.

Last night Paul Le finished behind teammate Uvis Kalnins in the 200 IM. Tonight, though, Paul Le was able to claim his first individual win of this year’s MAC Championships. Le went a 46.80 in the 100 back to set a new pool record. Cole Bateman ended up as the runner-up with his 47.89.

Not messing with a winning combination, Missouri State used the exact same team as they did during last year’s MAC Championship. Their team of Paul Le (47.29), Isaac Springer (53.26), Vitalii Baryshok (46.87), and Uvis Kalnins (43.14) were able to reset their MAC Meet record from last year when they won tonight in 3:10.56. After a great night for each swimmer individually, they were able to come together and achieve something special as a team. EMU would finish in second (3:14.02).

Going into the final day of competition Missouri State has a 24 point lead. EMU sits in second, but they were able to qualify four divers for tomorrow’s 3 meter finals (compared to Missouri State’s one). The Missouri State Bears have 3 of the top seeds in individual events tomorrow. They will need all their swimmers to step up if they want to hold onto their lead and defend their title.