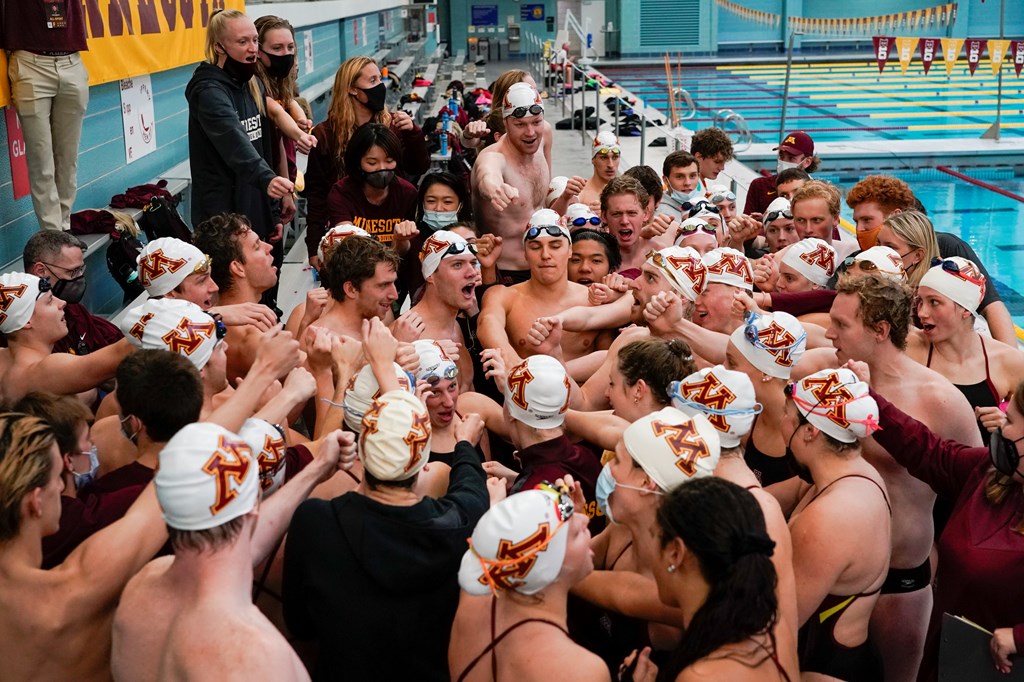 Zhu dominated the competition at last week’s Minnesota Invite as she swept the 1-meter and 3-meter boards, remaining undefeated on the season across all diving events.

She started on the 3-meter Thursday and breezed through the prelims with a score of 331.05 that was good for first place. She then elevated her performance and won the 3-meter finals with her score of 340.25, which was over 55 points ahead of second place.

Zhu then moved to the 1-meter on Friday and again finished first in the prelims and finals. After a score of 308.65 in the prelims, she improved in the finals with a mark of 325.65, which was nearly 33 points better than the field.

It’s the eighth time in her career that Zhu has been named the Big Ten Diver of the Week, previously earning the distinction three times as a sophomore in the 2019-20 season and four times this season.

She becomes the third Gopher to win the award at least eight times in a career; only Maggie Keefer (15) and Yu Zhou (14) have won more.

Zhu is also the first Gopher diver to take home the award five times in one season since Zhou, a current Minnesota graduate assistant, did it eight times as a junior in the 2015-16 season.

Bennett won two of the three diving events at last week’s Minnesota Invite to be the first Gopher to take home Diver of the Week honors since Jake Butler on Oct. 20 last season.

His first win came on the 3-meter board. He was fourth through prelims after his score of 313.10, but he followed that with a career-best score of 363.30 in the finals to secure the victory. He was 6.1 points ahead of second place.

Bennett then moved to the platform, where he was competing for the first time in his career. He showed no signs of inexperience, however, as his score of 343.50 was over 18 points better than the field.
In addition to his victories, Bennett also placed fourth on the 1-meter with a finals score of 313.10, the second highest score of his career.

Hernandez put forth a strong effort at last week’s Minnesota Invite, recording a pair of ‘B’ cuts, being part of a school record and establishing personal records in every event. He’s the first Minnesota male Freshman of the Week honoree since Sawyer Grimes on Feb. 10, 2021.

On the opening night of the Invite, Hernandez was a part of Minnesota’s 800 free relay. The team finished in 6:16.25, shattering the school record of 6:20.41 set in 2009. The time was also good for third place Wednesday and the fifth fastest time in the country this year based on marks entering Wednesday. Hernandez’s 200 split was 1:35.60.

The Gopher women and men are off from competition until next month when they visit the University of Tampa for a dual meet on Jan. 12.