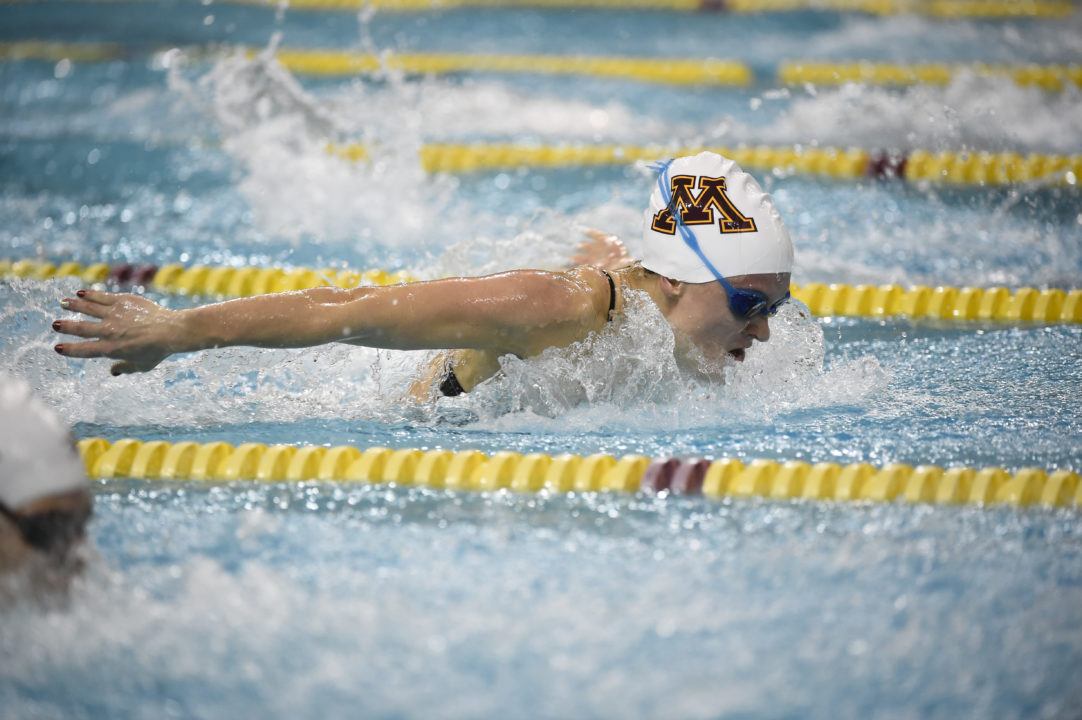 The Gopher men and women got things started in a similar fashion, with their ‘A’ squads winning both relays, followed by Denver’s ‘A’ and ‘B’ squads taking 2nd and 3rd, respectively.

Minnesota junior Chantal Nack ran away with the women’s 200 free, touching 1:48.30, fully three seconds ahead of her closest challenger. Nack also won the 100 free in a 50.73.

MINNEAPOLIS – Minnesota men’s and women’s swimming and diving enjoyed their return to the Jean K. Freeman Aquatic Center with a pair of dual wins over Denver Saturday afternoon. Both squads collected 13 first place finishes in the 16 event meet.

“In almost every event we saw something that really looked like we are on the right path and I am very happy with the meet,” said head coach Kelly Kremer. “For us the relays get you going and it sure helps the rest of the meet. That gets the team feeling like we are out to perform that day.”

Leading in the freestyle Bowen Becker connected in the 50-yard free (19.62) and 100 free (43.81). Dominating the breaststroke, senior captain Conner McHugh took the 100-yard breast in 55.39, before defeating the field in the 200 breast in just over three-and-a-half seconds (1:59.46). Tumoas Pokkinen displayed his speed during the butterfly events. In the 100-yard fly Pokkinen touched in first at 48.19 following a tight finish in the 200 fly (1:49.38) beating teammate Matt Thomas to the wall one-tenth of a second quicker.

In the diving well, Alan LeBlang tallied a pair of first place finishes. LeBlang scored a 373.20 on the 1-meter and 399.00 on the 3-meter. Minnesota diving took the 2-3-4-5 spots behind LeBlang in both events.

WOMEN | No. 16 Minnesota 196, Denver 104
Strong contributions in the freestyle, breaststroke and butterfly events lifted Minnesota (7-1) to a non-conference victory over Denver.

Abbey Erwin gave the Gophers the strong start they needed picking up the first individual win of the day in the 1650 free in a time of 16:53.77. A few races later Tevyn Waddell extended her winning streak in the 100 back to six races, touching in at 54.98.

Sophomore transfer Kristen Hayden had herself quite the day on the diving boards. Setting a new personal record in the 3-meter Hayden notched 333.30 points for the top spot following a score of 293.33 in the 1-meter. Mariam Khamis, Beth Etterman and Morgan Justus all combined for a 2-3-4 finishes in both diving events.

UP NEXT
Minnesota hosts their regular season finale in Big Ten style on Jan. 26-27. The Gophers welcome Northwestern and Purdue to Dinkytown in a meet scheduled to begin at 6 p.m. on the 26th and noon on the 27th.

MINNEAPOLIS – The University of Denver men’s and women’s swimming and diving programs picked up six event wins, three apiece, but fell to nationally ranked Minnesota on Saturday at the University of Minnesota Aquatic Center.

Senior Morgan McCormick (Golden, Colo.) recorded an NCAA B Standard in the 200 back and sophomore Sid Farber (Portland, Ore.) turned in another provisional time in the 50 free.

In the women’s 100 back, McCormick grabbed second and Moden took third to earn Denver points. McCormick clocked in at 55.21, while Moden finished in 58.11.

Moden grabbed the first win for the women on Saturday, taking the 50 free sprint with a 23.62. Sophomore Sarah Lingen (Maple Grove, Minn.) rounded out the podium with a 23.95. Farber and Auchinachie finished second and third in the men’s sprint. Farber clocked in at 19.80, while Auchinachie finished in 21.04.

McCormick continued her success in the backstroke in her final season with the Pioneers, winning DU’s women’s second event of the afternoon with a 1:58.99 in the 200 back.

Denver’s men’s senior leader in the backstroke didn’t disappoint either, taking first as well with a 1:47.23 in the 200. Smith rounded out the podium with a third place finish in the event, finishing in 1:51.52.

In the final relays of the meet, Denver’s women’s A 400 free relay of Moden, Leckie, Wice-Roslin and McCormick finished second in 3:29.40. On the men’s side, Calkins, senior Ray Bornman (Mackay, Queensland), Auchinachie and Farber touched second in 3:01.28, while Wachtler, sophomore Hugo Sykes (Weston, Conn.), Webster and freshman Jackson Gainer(San Jose, Calif.) rounded out the podium with a 3:06.08.

UP NEXT: Denver returns home next week for its final two home meets of the season January 19-20 at El Pomar Natatorium. Denver will host Colorado Mesa on Friday at 4 p.m., before welcoming Utah on Saturday at 12 p.m. The Pioneers’ will honor their senior class before the meet against Utah on Saturday.