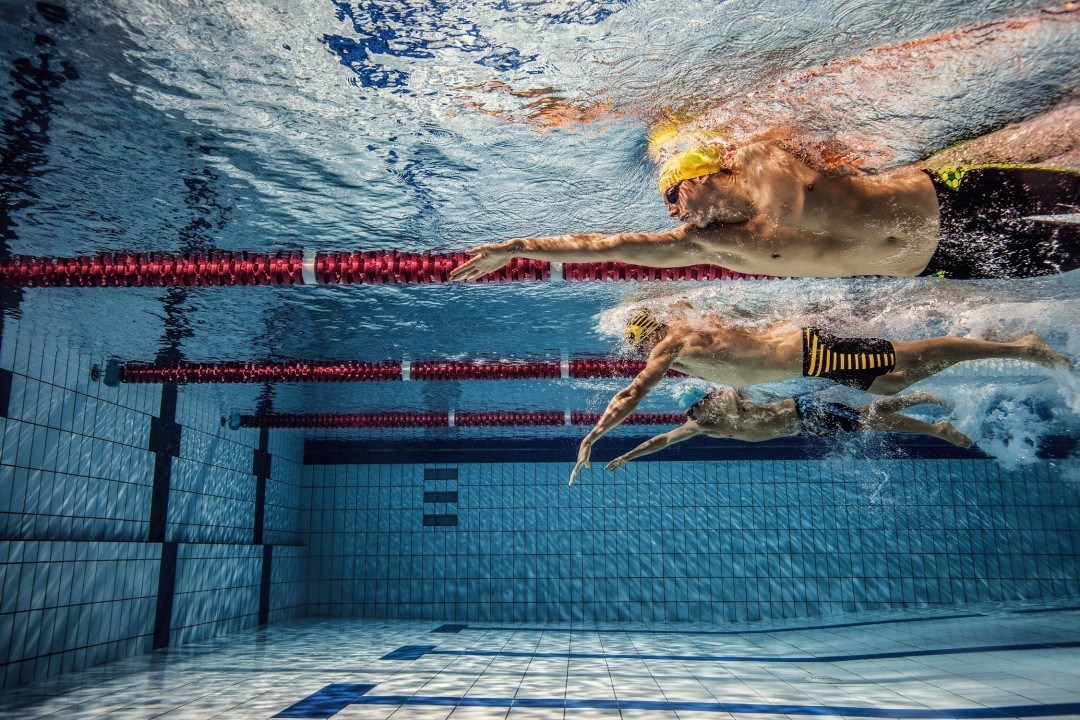 The No. 5 University of Michigan water polo team (15-5) suffered its first home loss of the year in a top-five matchup with No. 2 UCLA, but bounced back with a season-high 19 goals against George Washington to finish the weekend 3-1. Stock photo via Funky Trunks

ANN ARBOR, Mich. — The No. 5 University of Michigan water polo team (15-5) suffered its first home loss of the year in a top-five matchup with No. 2 UCLA, but bounced back with a season-high 19 goals against George Washington to finish the weekend 3-1.

The Wolverines are now 7-1 at home in 2016 after losing to UCLA in a defensive battle. Three of Michigan’s five losses have been to the Bruins, while all five U-M setbacks are against teams currently ranked No. 4 or better.

UCLA exploded for 39 goals in two games on Saturday, but Michigan’s defense would limit the high-scoring Bruins to just night goals. However, UCLA’s defense stymied the U-M offense, holding them to just five goals in the game.

All 22 players on Michigan’s roster got to play in the nightcap against George Washington as Michigan coasted to a 19-2 victory over the Colonials. The starters played sparingly to start the game before giving way to the bench. U-M showed its depth with 11 different players scoring goals.

“Our entire team was able to get in, get some minutes and show the work we have put in at practice,” said sophomore Laura Jimenez. “It was a total team effort.”

Michigan was held scoreless in the first period, but used a 3-0 run in the second to take its first lead of the game. Senior Kelly Martin kickstarted the Michigan offense drawing back-to-back penalty fouls to start the second. Ali Thomason’s first penalty shot was saved, but her second gave the Wolverines their first goal.

UCLA answered the Michigan run with a 3-0 run of their own to go into halftime up 5-3.

The Wolverines trailed just 7-5 late in the third quarter, but the Bruins were able to land a goal with four seconds left in the period.

In the fourth quarter, UCLA locked down Michigan as they would not score again. The Bruins managed just one more goal to make it 9-5, which was plenty for the victory.

Thomason scored two of Michigan’s five goals and had three steals in the contest. The five goals were a season low for the Wolverines. Freshman Kim Johnson had one goal and one assist. Senior Julia Campbellmade eight saves, while allowing nine goals.

Michigan scored six goals in the first and third quarters and five in the fourth en route to a big 19-2 victory. George Washington was the first unranked team Michigan had played in 2016, starting the season with 20 straight games against ranked foes.

At the end of the third quarter, Jimenez put on a show scoring three straight goals in a span of 1:12 minutes. The next three goals Michigan would score would all be by freshman Delaney Cleveland in a span of 2:17 in the fourth quarter. Cleveland’s first goal was her first collegiate goal, but she wouldn’t stop there.

Three U-M players besides Cleveland registered their first goal of the season. Senior captain Emily Sejnapunched one in midway through the second period. Junior Kaitlyn Cozens scored on a power play for her first of 2016 and ninth career goal. Junior Jamie Nolan, who had 31 career goals, notched her first of the year in the third quarter.

Freshman Anna Edgington had a strong defensive effort with two steals and a field block. Fellow freshmanSami Pratt picked up her second goal of the season, while Julia Sellers scored twice and had two steals. Sophomore Caroline Anderson played limited minutes but did manage to record her third hat trick of the weekend.

The Wolverines will have next weekend off before traveling to Tempe, Ariz. March 19-20 to compete in the Arizona State Invite. U-M will face Arizona State, Pomona, Pacific and Marist.