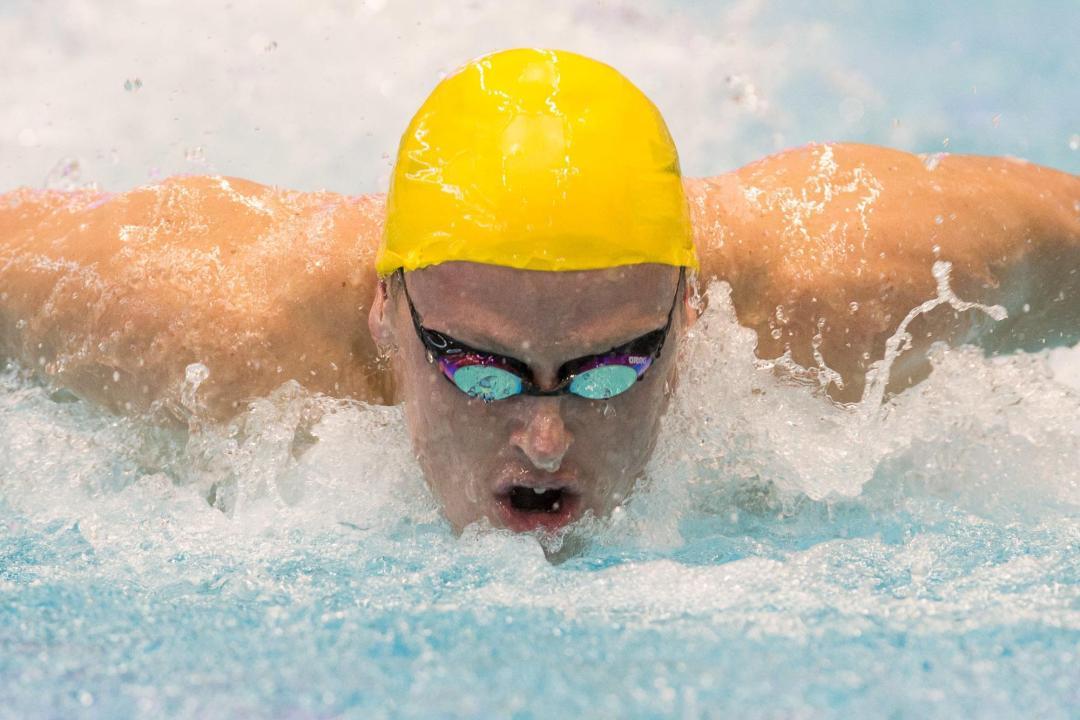 The Michigan Wolverines are on the receiving end of a big shipment of Big Ten weekly awards after hosting the huge Quad meet this past weekend. Archive photo via Tim Binning/TheSwimPictures.com

The Michigan Wolverines are on the receiving end of a big shipment of Big Ten weekly awards after hosting the huge Quad meet this past weekend.

The Wolverines earned shares of 3 of the 6 weekly awards, including both freshman of the week honors.

A quick run-down of the awards:

Swimmers of the Week:

Bosch put together three top-two finishes at that quad meet, which featured national powers Texas, Indiana and Louisville. Bosch won the 200 fly, the event in which he claimed the national title last year, and took second in the 200 and 400 IMs. He’s ranked in the top 4 in the NCAA in all three of those events.

Bosch also helped Michigan’s 200 medley relay earn the win in a nation-leading 1:26.96. Only a junior, this is Bosch’s fourth time being named Big Ten Swimmer of the Week.

Snodgrass won twice at the quad meet on the women’s side, and also added a runner-up finish. She swept the backstrokes with some outstanding early season times (52.48 and 1:53.29) while also taking second in the 200 IM. The Hoosier junior now leads the NCAA in both backstrokes and looks to be on track to defend her NCAA 200 back title.

Snodgrass returns to the Big Ten weekly awards after a one-week hiatus – she was named Swimmer of the Week two weeks ago and has earned the honor 7 times in her college career.

Freshmen of the Week

The men’s Freshman of the Week award is shared by a pair of standout freshmen. Powers sparked at the Michigan Quad, beating a tough field to win the 50 free in 19.79. He’s one of just six men in the nation to break 20 so far this year, and has now done it on multiple occasions.

Johnson wins his second-straight freshman of the week award after winning both the freshman and diver award last week. The Boilermaker won the 3-meter springboard event as Purdue’s divers jumped in on the Ohio State vs Cincinnati dual meet. His score of 428.05 is an NCAA Zone-qualifying score.

Michigan also got in on the women’s Freshman of the Week award. Smiddy, out of Florida, took second in both backstrokes at that Michigan Quad meet, losing only to defending NCAA champion Snodgrass of Indiana. She sits inside the top 5 in the 200 back in the NCAA rankings for this season.

This is her second time being named Freshman of the Week.

Divers of the Week

Competing against his former team, Hixon won both springboard diving events at the quad meet, easily topping NCAA Zone qualifying scores. Hixon was just shy of 400 points on both boards. The defending NCAA champion earns his first Big Ten weekly honor after transferring from the Big 12’s Texas in the offseason.

The Golden Gophers dominated North Dakota over the weekend, and sophomore diver Tenenbaum picked up her first Big Ten weekly award. Tenenbaum won the 3-meter event, beating out the rest of Minnesota’s tough diving corps. She also came home in second place on the 1-meter board, hitting NCAA Zone cuts in both events.