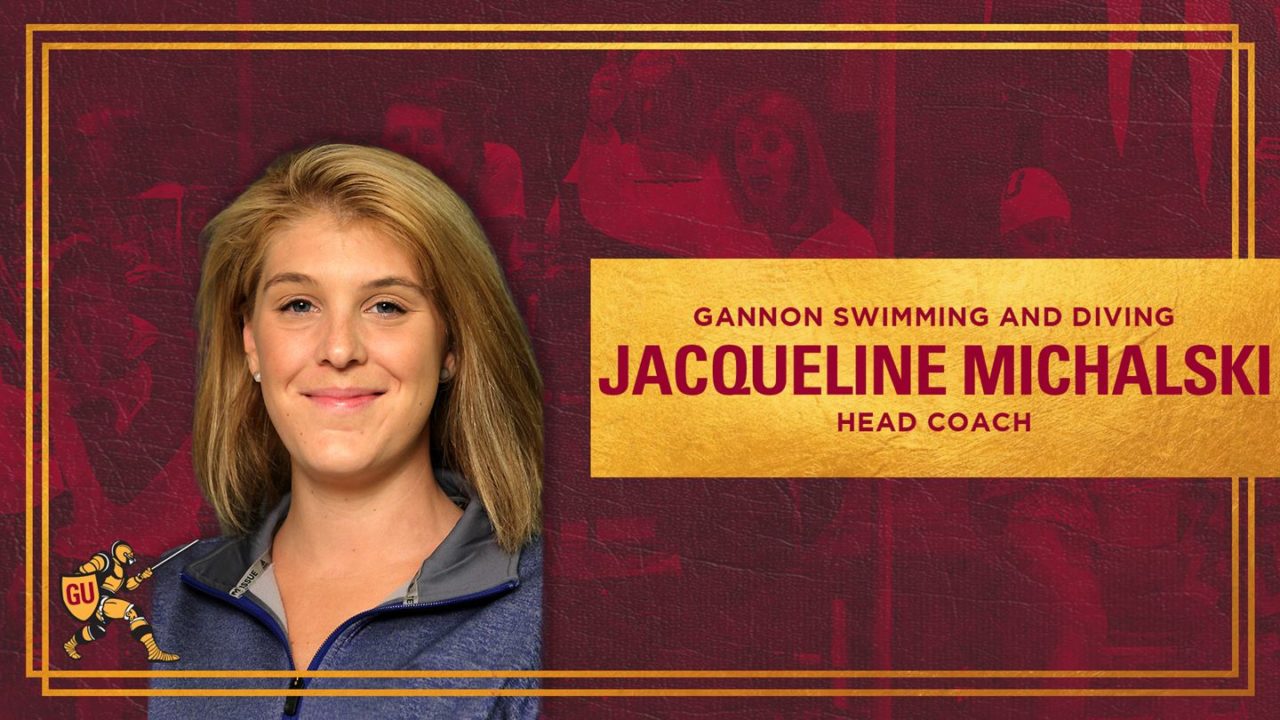 Already with a track record as a collegiate head coach, Jacqueline Michalski has been named Gannon's next head men's and women's swimming and diving coach. Current photo via Gannon Athletics

ERIE, Pa. — Already with a track record as a collegiate head coach, Jacqueline Michalski has been named Gannon’s next head men’s and women’s swimming and diving coach, announced Friday.

Michalski brings nine years of collegiate coaching experience with her to Erie, including the past five years as the head coach at Division I Eastern Illinois.

“I’m incredibly grateful and thrilled for the opportunity to lead the Gannon University swimming and diving program in its next chapter,” Michalski said. “I am sincerely thankful to Director of Athletics Lisa Goddard McGuirk and Associate Director of Athletics Dan Teliski for entrusting me with this responsibility. I want to thank my support system of family, friends, mentors and coaches who have helped me develop into the leader I am today.

“I’m excited to get to campus and build upon the success of the program, and take Gannon to the next level.”

Michalski guided the Panthers to success in the pool during her time in Charleston, Illinois. She coached six All-Summit League swimmers, and the team set 19 program records and nine pool records over those five seasons. When delving deeper into those results, she helped the teams set a total of 121 marks inside EIU’s top-ten times for specific events.

The Panthers also were successful out of the pool, as five swimmers earned Summit League All-Academic awards. Both teams were also recognized for their academic prowess by the Summit League, College Swimming and Diving Coaches Association, or NCAA.

“We are very excited to welcome Jacqueline to Gannon,” Goddard McGuirk said. “Her collegiate coaching experience, combined with her approach and commitment to the complete student-athlete experience will ensure the continuation of the positive momentum our teams have built.”

Prior to Eastern Illinois, Michalski coached at St. Francis (Pa.) for two seasons from 2012-14. Focusing on sprinters, and also handing recruiting coordinator and operations duties, she helped the Red Flash to the 2013 Northeast Conference championship.

In two seasons in Loretto, Pennsylvania, she guided the team to 16 school records, four conference records, as well as Division I’s third-highest team GPA in 2012-13.

A four-year member of the swimming and diving team at SUNY Oswego, Michalski was a two-time SUNYAC All-Academic selection, and helped the Lakers to the 2007 conference championship. She also earned an all-conference honor during her time at Oswego.

Michalski has extensive experience teaching swimming, beginning as the head coach for the Central Open women’s team that competed at the Empire State Games in 2008. She has also worked at college camps throughout her career, including at the United State Naval Academy, United States Military Academy, Georgia, Virginia, Cornell and Kutztown. Her experience extends internationally as well, assisting in coaching the 2013 Swedish National Meet and at the Dynamo Elite camp of South Africa in 2016.

A native of Chenango Forks, New York, Michalski earned her bachelor’s degree in wellness management from Oswego in 2010. She added her master’s degree in health care administration from King’s in 2012.

I wish you the best of luck in your new position. I love your passion for swimming.