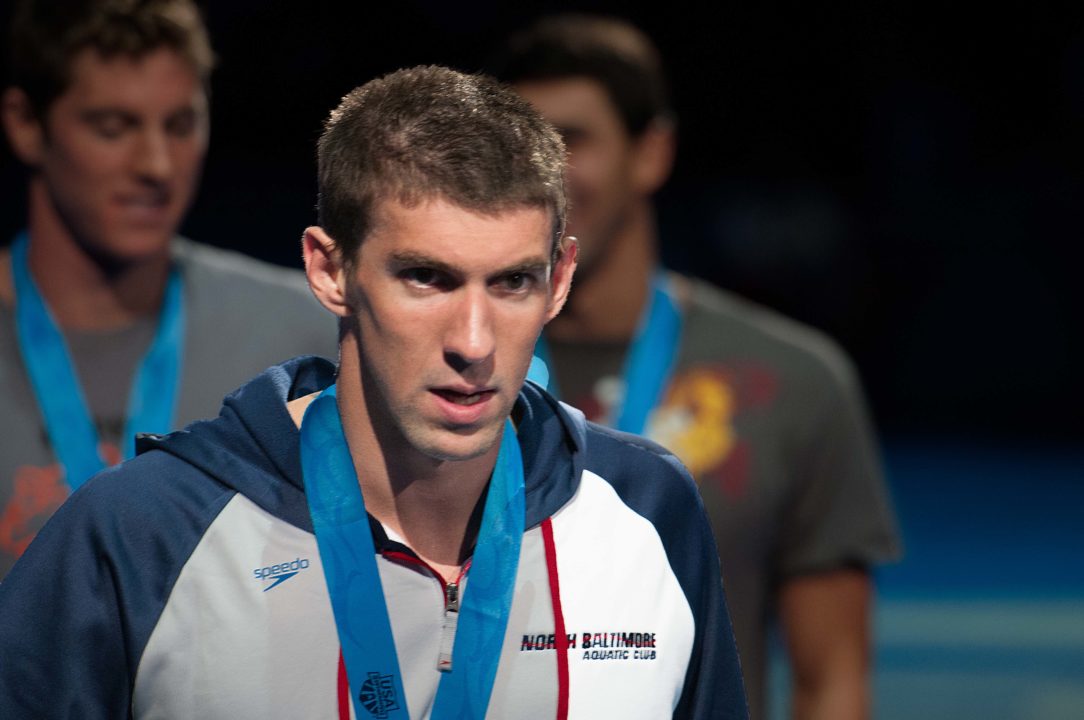 Michael Phelps has scratched the 200 free from his Olympic schedule, his coach Bob Bowman reported via Twitter today.

“MichaelPhelps will be removing the individual 200 freestyle from his Olympic program. This will give him a full slate of 7 events.”

The move is a stunning one, after he won the individual men’s 200 freestyle event at the Olympic Trials that wrap up today in Omaha. His final time of 1:45.77, just bettering Ryan Lochte, was probably his most disappointing of the week, where he not only missed a World leader, he didn’t even go a season-best time.

Bowman explained the decision further that “This change will allow him to focus more energy on relays for Team USA.”

That means Ricky Berens is the new entry in the race for Team USA when they travel to London. For Berens, a self-described “relay-swimmer,” that would be his third swim and only his first individual race in two Olympic appearances. Berens is unlikely to medal, while Phelps would’ve been a strong favorite to end up on the podium somewhere.

With this move, Lochte and Frenchman Yannick Agnel will be the two favorites in the men’s 200 free; Lochte is the defending World Champion, and Agnel has looked spectacular this morning after switching his focus from the 400 free to the shorter 100-200 schedule this season.

Based on Bob Bowman’s assertion that Phelps will still swim 7 events, we can expect that means that he’s been assured a place on the 400 free relay (though he didn’t swim the 100 free individually) and the 800 free relay, even with the scratch.

This was probably the shakiest of Phelps’ potential 5 individual medals going into the Olympics, and should really strengthen his run to hold off Lochte in the 200 IM and possibly catch his rival in the 400 IM.

We’ve heard a common question about whether or not this bumps Davis Tarwater onto the team after he finished 7th (usually 6 are taken). Shortly after Phelps’ announcement, it was revealed that Tarwater would be added to the team.

Smart move. There was a very good chance he woulda failed to.make the.podium in that event.

Also, 200 free does not give him the chance to three-peat.

I agree that if he was to drop one this was it. It falls on a good place in the schedule for him to not have an individual event. Plus it still gives him the opportunity to 3-peat in four individual races.

I’ve been saying this all along since last year when the London schedule is published.

while Phelps is interested in records and his place in history. 200 free does not really add to that, while it could potentially leave him without a medal, so Bowman and Phelps make the best decision.

And yet when I said this, I was attacked by Phelps mililitant fans.

Phelps will NOT swim an event if he’s pretty much sure he won’t win it, and based on the final (when he gave it all and yet only recorded 1:45high) it just seems Phelps knows that he won’t win 200 free in London.

He’s basically a lock for a medal in that event, though. He could easily end up 5th in the 200 Free. In terms of a total medal count (which is what I think he’s going for now) it makes more sense to swim the 400 IM over the 200 Free.

It’s one of the smartest decisions of all time. I say for many months now that Michael Phelps couldn’t swim all these events without a risk for his 100 fly. It’s a good news for Ricky Berens who has never swum on individual in a big competition and it’s also a good news for the american men’s 4X100 free relay. You will have a fresh Michael Phelps at the start. Now I hope Missy Franklin will take the same decision.

“one of the smartest decisions of all time”? i can think of a number of smarter decisions in the history of mankind. for example, the decision to invent the crunchwrap supreme. mmmm.

Perhaps, he did not mentioned it, but Bobo Gigi is French. As a frenchman, there is much enthusiasm. Hyperbole is a way of life.

I’m happy because I repeat for many months now that Michael couldn’t have 8 events to swim and many people thought I was wrong. Michael is older and has to make choices.
Missy has to make the same thing now to focus on the 100 back. I repeat that very often. My lobbying will pay off. She has a great coach who will take the smartest decision.

and you also want Phelps to ditch 400 IM. It didn’t happen.