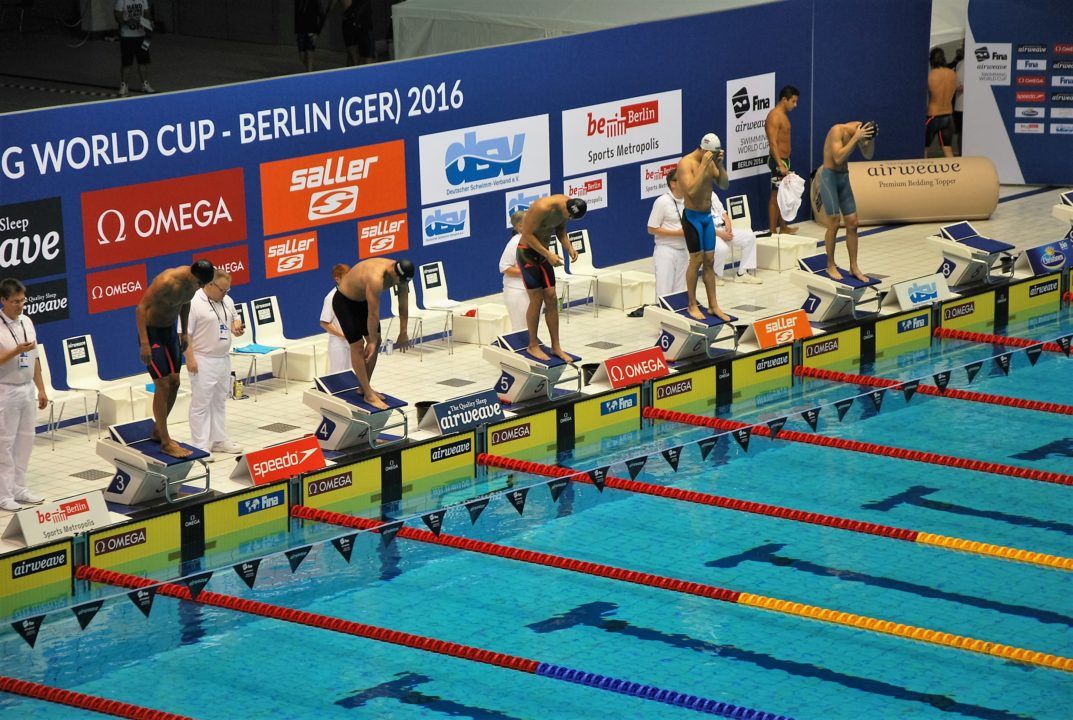 Pernille Blume will lead the Danish contingent into the Tokyo 2020 Games as defending champion in the women’s 50 freestyle.

The second stop of the 2016 FINA World Cup tour is upon us, kicking off today in Berlin, Germany.

After the tour’s opening Paris stop, Vlad Morozov and Katinka Hosszu lead the points and money lists. Morozov broke the first world record of the series in the 100 IM in Paris. Alia Atkinson, who is second in women’s points, tied a world record in the 100m breast.

The morning session at the World Cup Berlin 2016 started at 10 am in the fast Berlin pool where Missy Franklin set her first world record at the Word Cup Series 2011 in the 200 m backstroke (SC). In 2011, also Michael Phelps showed up at the Berlin World Cup – very much to the delight of the German audience.

Asked at yesterday’s press conference in Berlin “why she swims such grueling competition schedules” she smiled and asked back: “Why not?”

Top-seeded in the women’s 100m fly is Katinka Hosszu (HUN), she finished in 57,27, second fastest into the final is Denmark’s Jeanette Ottesen in 57,31.

Jeanette Ottesen (DEN)  finished with the top time this morning in the 50m freestyle in 24,32. Madeline Groves  took the second spot for the final in 25,85. Katie Meili came in with the fourth fastest time in 24,90.

In tonight’s men’s 200m breaststroke final, Germany’s World Champion Marco Koch is the top seed (2:07,18). Koch pulled out of the Chartres World Cup because of an acute infection, afterwards he visited the doctor of the German National Swim Team in Hamburg for an examination and did everything to get back into the pool to compete in Berlin in front of the German home crowd and his family. Kirill Prigoda (RUS) came in with the second fastest time in 2:07,58.

Daryna Zevina was a huge surprise at the last world cup, almost getting the world record of a huge back halfed effort, hopefully this world cup will be as exciting as the last one with WRs and tied WRs and almost WRs.

Exciting the last one?
Except Atkinson and Morozov it was boring.

Zevina nearly got a WR as well

I think Bobo was referring to slow, boring French swimmers.

Andrew would so much better in the 100 free if he just tweaked his technique a little bit. He’s a tall and long kid that swims like he’s 5’8″ (on freestyle his other strokes are pretty good).

No time for technical work in mid-season USRPT! Only time to race!

I agree with tweaking his technique. Freestyle is clearly his worst 100. I also think he should change up his race strategy. He takes his 100 free out slower compared to his top speed than any other stroke. I think that he should swim the 100 free like Ervin and Santo Condorelli. Go out really fast and try to hang on. It seems like MA holds back on the first 50 but doesn’t get paid back on the second half. MA’s best 100 free was his 13-14 scy nag when he went 43.9. He took that race out in 20.5 I believe when his top 50 free time was 19.76. I know that is short course but I think his… Read more »

That’s what makes it so strange.
Doesn’t USRPT emphasize technique order swimming junk yards?
So why does Michael Andrew have such sloppy technique?
Go compare MA’s technique with those of junior pan pacs top sprinters eg. Cartwright, and you can tell how inferior MA’s technique is.

I completely agree. I’m sure the power and torque of his freestyle pulls are spot on given his stature, but I’ve always been puzzled when looking at his stroke above the water. Compare his short, contracted strokes to a guy like Nathan Adrian. They have similar physiologies but their strokes couldn’t look more different.

I don’t know what you mean with “swims like he’s 5’8” there are plenty of swimmers that are not tall and still have good technique and swim fast as well.

I guess he is talking about elite swimmers not high school ones but there are lots of 5’8 to 510” dudes in high school that go 45 to 47 in a 100 yard freestyle.

I think he’s talking about his DPS, and stroke rate.

They were referring to him (a 6″6 man) taking strokes the length of a 5″8 man. Saying his stroke isn’t long enough. They weren’t implying everyone 5″8 has bad free technique…. Lol