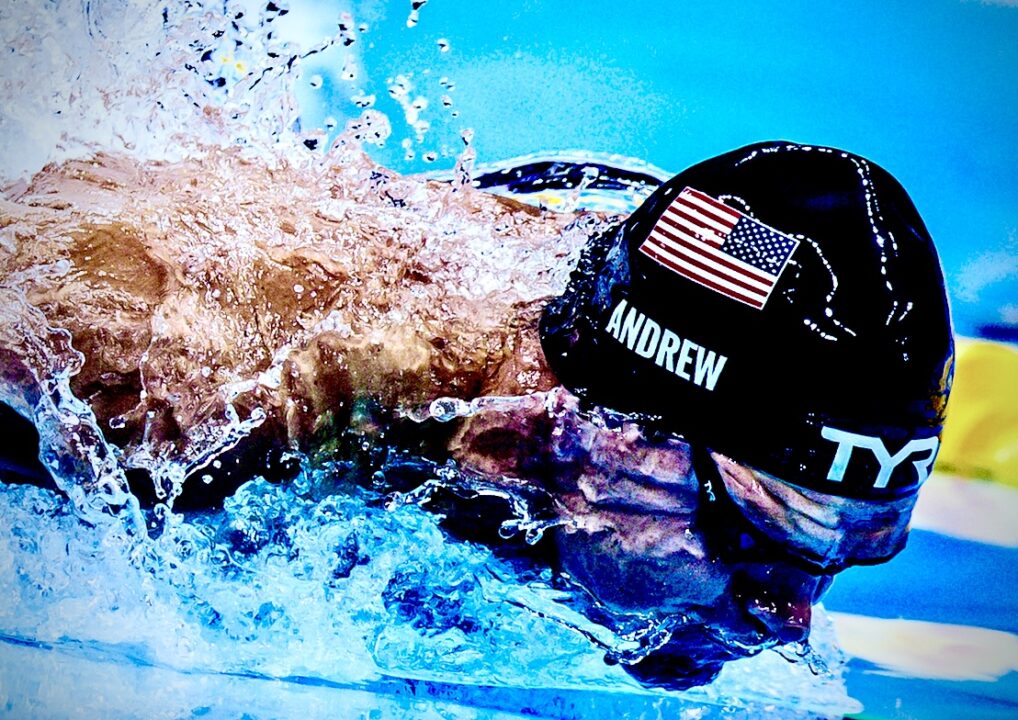 Michael Andrew staked his Olympic gold medal on a swimming race against two brothers in a "boss battle." Who came out on top? Archive photo via Jack Spitser/Spitser Photography

US Olympic gold medal-winning swimmer Michael Andrew, who was on the World Record setting 400 medley relay at the Tokyo 2020 Olympic Games, participated in a YouTube series with the Dangie Bros, who have 5.7 million subscribers.

The video is called “Fighting BOSS Battles in Real Life,” and takes on the “pros vs. joes” format, pitting the brothers against four “bosses” who are professionals in what they do.

After passing level 1, where they had to beat an expert marksman (2v1) in paintball, the brothers headed to the pool to race Michael Andrew in a 100 meter freestyle.

They first attempted to beat MA using a kayak. Even with a 15-second head start, that wasn’t enough – mostly because turning a 10 foot kayak in a 6 foot swimming lane doesn’t work very well.

Then they did a head-to-head straight-up race to show just how much faster a pro swimmer is than the average person, even betting Andrew’s Olympic gold medal on the race. The brothers swam a relay (50 meters each) while Andrew swam the full 100 meters. While the brothers knew how to swim, and each finished their length, Andrew beat them by almost a full 50 meters.

After that, they took on a world record holding strongman and a wold champion sumo wrestlers. Those results went about as the one with Andrew did. At some point, the guys and three friends try to push the sumo wrestler out five-on-one and still failed against the 6’4″, 500 pound champion.

While the challenge is good fun, it is a great demonstration of just how good ‘the best’ are relative to the average human, and should be a final clapback to people on Twitter who like to declare how easy certain sports look based on watching them on TV.

Then on the other hand that sumo wrestler proved the same point by using what looked like 30% effort max.

Lmfao how is Mandrew the most fun guy in swim rn

Michael has always been a great personality. He has always understood his spotlight, even from a young age.

I disagree with his stance on COVID vaccines, but I will never waver from the fact that I think he’s a good person, an interesting conversation, and fun guy to be around. He’s one of the few people who are anti-COVID-vaccine that I think I could bare to have a vaccine conversation with at a non-professional level.

When are we going to find out about Dressel?

Michael Andrew? More like it looks very well like Micheal AnDREW the best popsicle stick in the game “what bozos will I race today?!” !!!

It’s a good point that people don’t realise how much better professionals are than the average person. A female para-athlete with one leg, Sophie Pascoe, swam a 1:02 100 free at the Comm Game recently. The average able-bodied and healthy male couldn’t swim anywhere near that.

These dudes don’t swim on a regular basis and if they did Michael would have beat them only 23 meters instead of 50. I have better form than these days because I work out almost every week and I’ 65 years old but I would not go against Michael. He would smoke the top masters swimmer in the 65 to 69 year old age group male or female.

Screw the head start. How about a 150 IM first

@Braden Keith, off topic but are we gonna have a european champs SS fantasy draft ?

Wonderful title. Made me love this article more.

It made me think, “what a tool,” but then it wasn’t as bad as I thought.