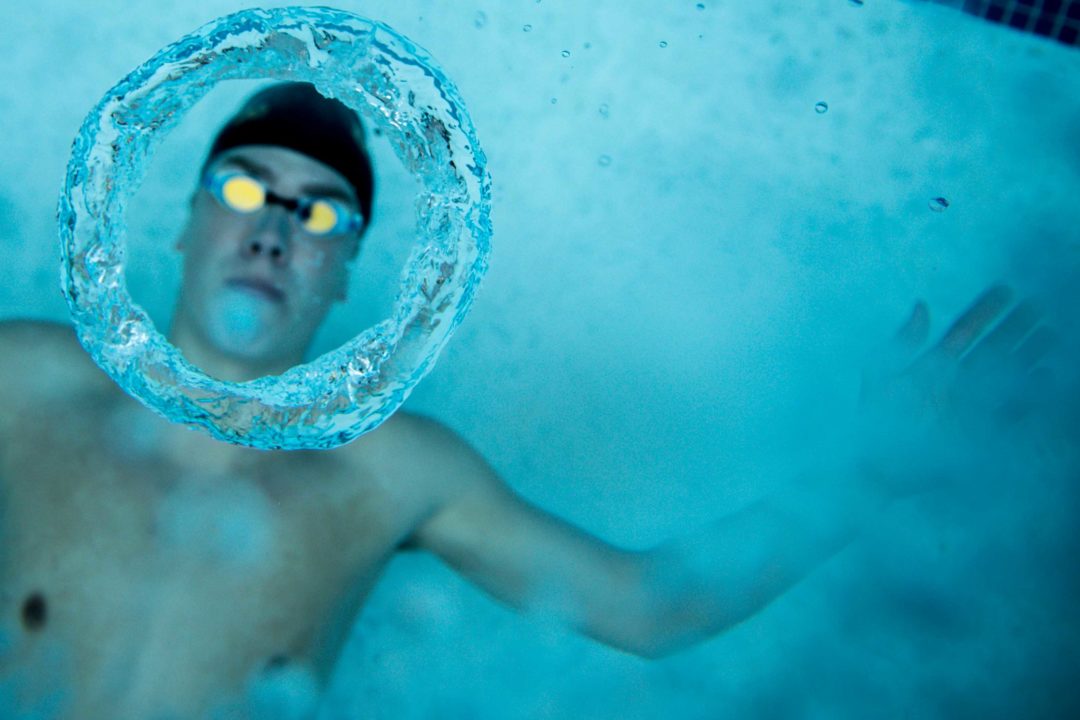 Mental toughness is necessary to become a swimming champion, as it is in any sport. Some are born with it. Others must learn how to get it. Current photo via Jack Spitser/Spitser Photography

At The Race Club we try to help swimmers become mentally tougher. Mental toughness is necessary to become a swimming champion, as it is in any sport. Some are born with it. Others must learn how to get it.

At University of Texas, Eddie Reese used to rank all of his swimmers on mental toughness from 0-10. He called it the Killer Instinct scale. In order to grade his swimmers, he needed to see how they performed in the Championship meets and particularly during their freshman year.  After all, those are the meets that count.

Whatever level you may have been born with on the Killer Instinct scale, we do believe you can improve your ranking on that scale. At The Race Club we teach a five step process to improve your mental toughness; goal setting, visualization, confidence building, focus, and anchoring.

In our talks on mental training, we often share an inspirational story of one of the many swimmers that we believe are a 10 on the killer instinct scale. One of my favorite stories is of Mike Burton. Many of you have never heard of him, but you should know about him. He was as mentally tough as Michael Phelps, but with a lot less talent.

Mike was from Sacramento, California, and trained under the great coach, Sherm Chavoor. He started swimming competitively at the age of nine as a result of a bike accident. Although he was small and had small hands and feet, he was kind of like Forest Gump. He just kept on swimming, outworking everyone else around him.

By the time Mike was at UCLA in the late 60’s (back when they had a men’s team), he had become the world’s best distance freestyler, holding American and World Records in the 1500 meters. In 1966 at the Spring Nationals in Brandon, Florida, which was the last outdoor short course Nationals ever held, the weather was miserable; cold (38 degree low), wet and rainy. Everyone swam poorly, except Mike. He didn’t care about the weather and broke two American records.

In 1968 at the Olympic Games of Mexico City, after graduating from UCLA, he appeared to have a story-book ending to his illustrious career, winning gold medals in the 400 meter and 1500 meter freestyle events in high altitude. In those days, there was no post-grad swimming program around and no money to support a career.  Seemed like a good time for Mike to bow out. But he wasn’t finished yet.

In 1972, Mike decided to make a comeback at the age of 25, which was considered ancient in those days. In those four years since Mexico City, the swimming world, led by Rick DeMont, had passed him by. Rick was the new man on the block for distance freestyle swimming. Beautiful technique, awesome kick, amazing work ethic, Rick’s freestyle was like watching a ballet in the water.

At the 1972 Olympic Trials in Portage Park, Illinois, Rick won both the 400 meter and 1500 meter freestyle events in world record times. Mike qualified 8th for the finals of the men’s 1500, barely getting in. Somehow, the next evening Mike miraculously finished 3rd in the 1500 freestyle final to qualify for the Olympic Team. He received a standing ovation for his comeback effort. Yet no one expected him to win a medal in Munich, except Mike and perhaps Sherm.

In Munich, after Rick won the gold medal in the 400 meter freestyle on the first day of competition, it was abruptly taken away from him on the following day because of a positive test for ephedrine, an ingredient found in his asthma medication. He had never been warned that ephedrine was a banned substance nor that it was in his daily medication. Not only did Rick’s gold medal from his 400 get taken away, he was also disqualified from swimming the 1500 on the final day. That mishap likely cost Rick two Olympic gold medals.

The other Team USA swimmer in the 1500 meter freestyle, Doug Northway, did not swim well. In the finals of the men’s 1500 meter freestyle, on the final day of Olympic competition, Mike Burton was our best hope for a medal. He had qualified behind two faster Australians, Graham Windeatt and Brad Cooper. Both Aussies had their eyes on the gold medal.

When the gun went off for the start, Mike went out fast, quickly gaining a body length on his competitors.  That was the only race strategy he knew; go out fast and try to hang on. By the 600 meter mark, however, Windeatt had already passed Burton and Cooper was gaining ground on him. The Australians, sitting next to us in the stands, were already celebrating the victory. We were cheering Mike on, hoping he could hang in for a silver medal.

There wasn’t much change in their positions over the next 400 meters, with Windeatt now holding about a body length lead, but after passing the 1000 meter mark, Mike started creeping back up on Windeatt. At 1200 meters, Mike caught the leader and over the final 300 meters extended his lead to win his final Olympic gold medal by 6 meters. It was the most courageous comeback I had ever seen in a swimming race.

That night, I went out with Mike to celebrate his victory. I was so awed by his race, at the end of dinner, I had to ask him this question.

“What do you mean?” he responded.

“I have seen a lot of swimming races,” I continued.  “But I have never seen anyone take it out fast, like you did tonight, get overtaken, and then come back to win so decisively. Where did you find the strength to do that?”

He looked at me like I had just asked the dumbest question possible.

“Gary”, he said. “I have never, ever given up in a race in my life….and I was not going to start tonight.”

When Mike Burton looked at himself in the mirror, he did not see a 5 foot 9 inch swimmer with small hands and feet. He saw a giant. He saw a champion.

What do you see when you look at yourself in the mirror?

The Race Club provides facilities, coaching, training, technical instruction, video, fitness and health programs for swimmers of all ages and abilities. Race Club swim camps are designed and tailored to satisfy each swimmer’s needs, whether one is trying to reach the Olympic Games or simply improve one’s fitness. Our programs are suitable for beginner swimmers, pleasure swimmers, fitness swimmers, USA swimming or YMCA swimmers, or triathletes; anyone who wants to improve