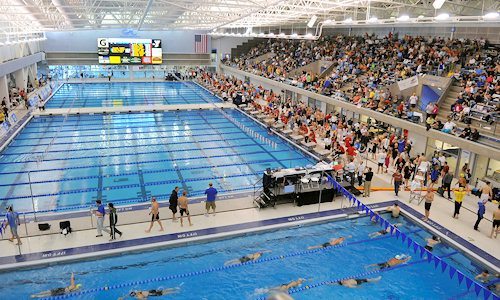 The second night of finals at the 2015 YMCA National Short Course Championships did not disappoint, as several up and coming stars continued to break records and take names at the Greensboro Aquatic Center.

The women’s 200 backstroke final saw all eight swimmers dip beneath the 2:00 threshold, led by a phenomenal swim by York’s Meghan Small.  Her 1:51.74 not only took back her Y Nationals record broken by Ali Galyer in the morning prelims (1:53.91), but it ranks Small as the third-fastest 15-16 women’s performance of all time in the event only behind Kylie Stewart and Elizabeth Pelton.  Tonight, Galyer settled for second place in a time of 1:53.76, which also dipped beneath her record from prelims, for the eleventh-fastest of all time in the same age group. Waynesboro’s Remedy Rule came in third place tonight with a sold 1:54.53, knocking about a half a second off of her third-seeded prelims swim.

The men’s A-Final saw Sarasota’s Austin Katz hold on to the top spot from prelims to finals, as the 16-year-old took the 200 back title in a time of 1:43.70.  This is the first time Katz has touched beneath the 1:44 threshold, signaling he is certainly on the right track in his training.  Edwardsville’s Sean Workman retained his runner-up status from this morning, touching behind Katz in a quick 1:44.12, which is Workman’s career-fastest time by over a second. Third place belonged to Matthew Garcia tonight, as he finished in 1:45.67.

The first and second seeds from this morning held their ground in tonight’s 200 breaststroke final, as newly crowned Y Nationals record holder Savanna Faulconer threw down another stellar time, 2:11.08, for the win.  Although this was a couple of tenths slower than her 2:10.79 prelims outing, Faulconer now owns the 10th and 13th-fastest performances of all time for the 15-16 age group.  Middle Tyger’s Jessica Horomanski was the second-place breaststroker tonight, although she added about a half a second ot her prelims time – 2:14.18 in prelims and 2:14.91 for finals.  Somerset Valley’s Megan Bull moved up two spots from her AM swim, clocking a nice 2:15.12 to earn her third place tonight.

Paul DeLakis was able to blast his way to a fresh new personal best in the men’s race, charging to the wall first in a time of 1:58.58, signaling the first performance for DeLakis to dip under 2:00.  Ocean County’s Jacob Limaldi was also able to nail a sub-2:00 time, touching in 1:59.25 for second place, although he has been in the 1:59 range a couple of times in 2014.  Brayden Lauffer from Triangle Area dropped one spot to finish in third tonight with a time of 2:01.94.

Remedy Rule took tonight’s 100 butterfly race in a season-best time of 52.94.  She was followed by 17-year-old Middle Tyger Katrina Konopka who touched in 53.13 and saw a nice time drop of about three tenths from her prelim time.  Bath Area’s Caitlin Tycz rounded out the top three in the event, finishing in a speed 53.77 blowing her previous personal best of 54.39 out of the water.

18-year-old Zachary Piedt maintained the pole position from morning to night, as he touched the wall first tonight in a time of 47.76 for the win.  Somerset Hills’ Sebastian Lutz finished just behind Piedt, separated only by 5/100 in his clocking of 47.81.  Brent Benedict moved up from his fifth seeded time from prelims to wind up third, registering a 48.00 for his efforts.

Congrats to Ms Small. I am thoroughly convinced that Coach Michael Brooks is one of the countries’ best.

Nice. Her 200 IM, her best event, should be pretty good on the last day of the meet.

Bobo – Thanks for the catch!