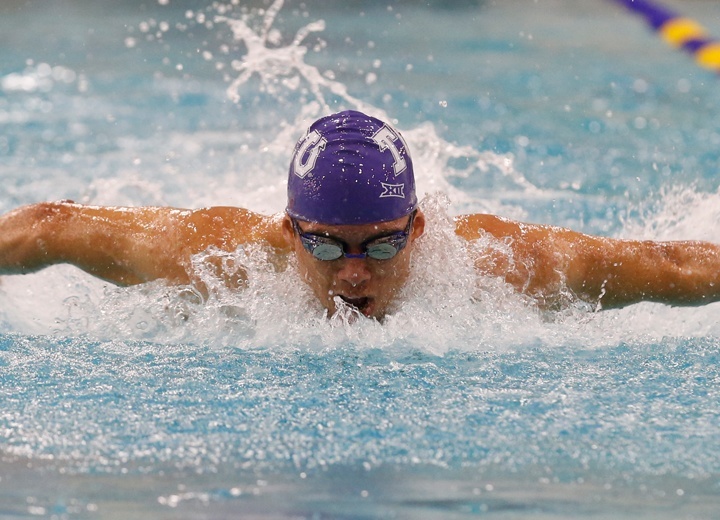 The TCU swimming and diving teams return to competition for the 2015 portion of the season at 11 a.m. on Thursday, Jan. 8, at the Biscayne Bay Aquatic Center in Miami, Fla.

It is the first time TCU will compete against the three programs.

Before the break, the Horned Frogs took part in the Art Adamson Invitational and the UT Diving Invite in College Station and Austin, respectively.

At the Art Adamson Invitational, TCU recorded 11 NCAA “B” cut times and set two school records over the three-day event.

The team of Cooper Robinson, Ford Story, Garrett Hills and Josh Mangus broke the school record in the 200 medley relay with a time of 1:28.09 in the second day at the event. The following night, Hills, Corey Nix, Sebastian Arispe and Mangus set the standard in the 400 free relay with a time of 2:57.87.

Overall at the three-day meet, the Horned Frogs tallied 35 events where a new season-best time was set.

At the UT Diving Invite, senior Ricky Bradley posted a pair of top 10 marks in the prelims and finals of the 1-meter event, with scores of 267.60 and 278.50, respectively.

TCU looks to replicate that same success as the season resumes in Miami on Thursday.

To follow the event live, follow the Horned Frogs on Twitter at @TCUSwimDive. A full recap and results will be posted to GoFrogs.com following the conclusion of competition on Thursday.