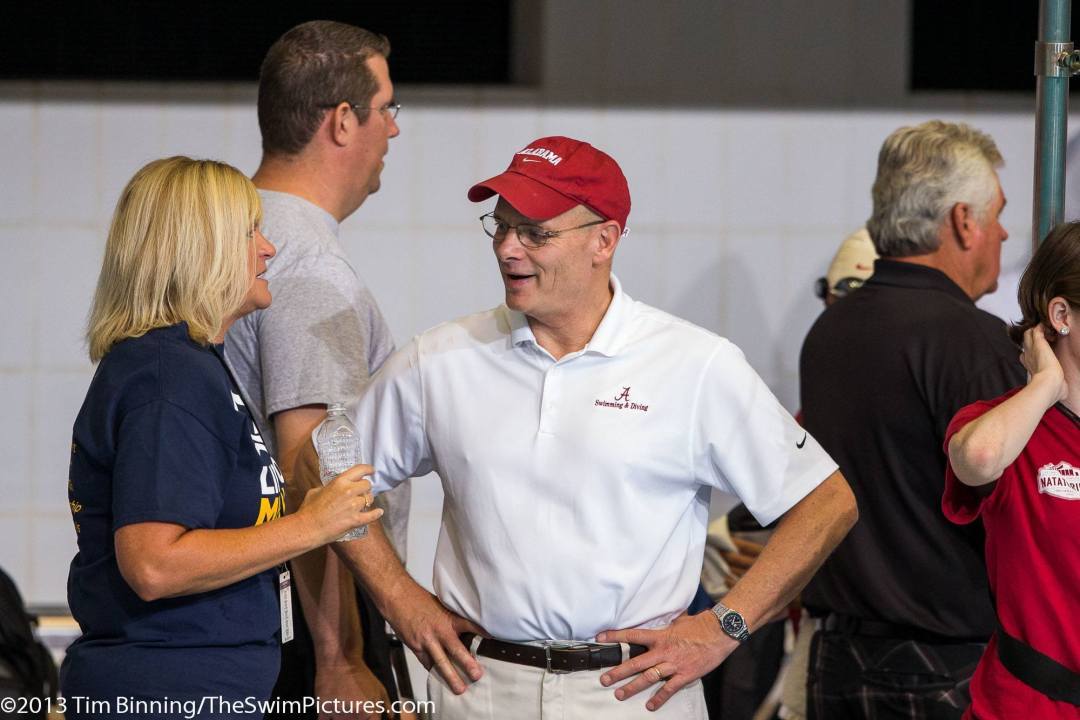 The Alabama Crimson Tide have home-field advantage in a big SEC tri-meet on Saturday. Archive photo via Tim Binning/TheSwimPictures.com

TUSCALOOSA, Ala. – The Alabama swimming and diving teams return home to host Southeastern Conference foes Auburn and LSU this Saturday. The meet begins at 11 a.m. at the Alabama Aquatic Center and admission is free.

“We’re looking forward to a great competition,” UA head coach Dennis Pursley said. “We’ve gotten off to a good start to the season and we want to keep that rolling. It’s always challenging when competing in the SEC, but that doesn’t change our focus, which is to be at our best when the post season comes along.”

On the men’s side of the action, the 50 freestyle races and backstroke events feature deep and talented fields and should provide great competition.

NCAA Champion and All-American Kristian Gkolomeev headlines the 50 freestyle after posting the nation’s third fastest time and the fastest in the SEC this season at Georgia of 19.87. Auburn’s Kyle Darmody will look to challenge Gkolomeev as he ranks 18th in the nation and fourth in the SEC this year.

Freshmen Luke Kaliszak – who boasts the SEC’s top 100 backstroke time of the season – along with sophomore Connor Oslin, who is ranked in the top-15 nationally in both backstroke races – will lead the Crimson Tide. Joe Patching of Auburn and Michael Young of LSU, each with top-15 times in the SEC this season, round out a tough field.

For the women, the 400 individual medley and the breaststroke events promise to be highly competitive. Alabama freshman Mia Nonnenberg, along with LSU sophomores Sophie Weber and Kara Kopsco all rank in the top-10 nationally in the 400 IM so far this season.

The breaststroke races will feature an even deeper field as Alabama senior All-American Kaylin Burchell ranks in the top-20 nationally in both the 100 and 200 races. Auburn will be led by junior Annie Lazor and sophomore Natasha Lloyd, both of whom have top-25 national times in the 100 breaststroke. Sophomore Colleen O’Neil of LSU rounds out the deep field with the nation’s ninth-ranked time in the 100 breaststroke.

The above is a press release submitted by the University of Alabama sports information department.