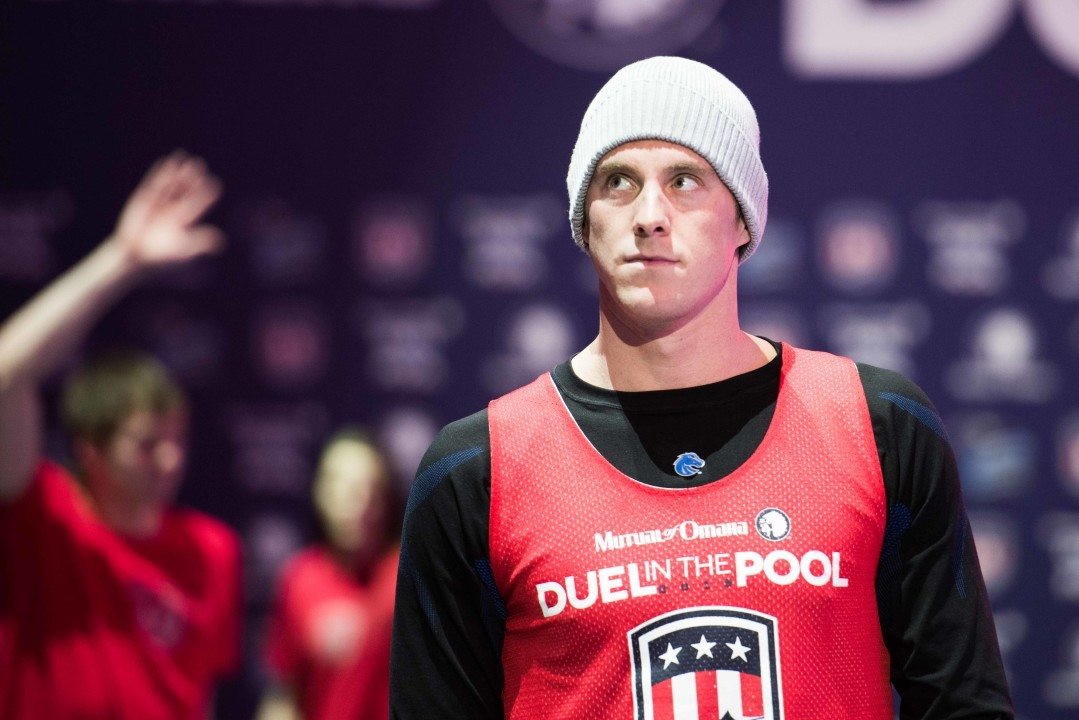 Meet 2016 US Olympian Conor Dwyer, from Winnetka, Illinois, who this summer is on his way to a 2nd Olympic Games... Archive photo via Mike Lewis/Ola Vista Photography

Meet 2016 US Olympian Conor Dwyer, from Winnetka, Illinois, who this summer is on his way to a 2nd Olympic Games with his first individual medal in sight. In his video, Dwyer also talks about his experience being 5’6 when he entered high school and not being a very good swimmer – not even making his high school varsity team as a freshman and sophomore. He says he “got his break” when the coaches allowed him as a walk-on at the University of Iowa (though he doesn’t mention the University of Florida, to where he later transferred and became one of the country’s best swimmers. Dwyer will swim the 200 and 400 freestyles individually in Rio, along with the 800 free relay – where he won gold in 2012.

At the 2011 World Aquatics Championships in Shanghai, Dwyer swam in the heats of the 4×200-meter freestyle relay, teaming with David Walters, Ricky Berens and Peter Vanderkaay. Dwyer swam the second leg and recorded a time of 1:47.31, and earned a gold medal when the United States won in the final.

At the 2013 World Aquatics Championships in Barcelona Dwyer earned his first medal of the meet, a silver, by swimming for the U.S. team in the preliminary heats of the 4×100-meter freestyle relay. Swimming the anchor leg in the heats, Dwyer recorded a time of 48.36. In his first individual event, the 200-meter freestyle, Dwyer won silver behind Frenchman and training partner at North Baltimore Aquatic Club (NBAC), Yannick Agnel, recording a personal best time of 1:45.32. At the 150-meter mark, Dwyer was in fifth place, but posted the fastest final 50-meter split of the field, 26.59 seconds, to earn the second place finish. In the 4×200-meter freestyle relay, Dwyer combined with Ryan Lochte (1:44.98) Charlie Houchin (1:45.59) and Ricky Berens (1:45.39) with the team finishing in first place. Swimming the lead-off, Dwyer recorded a split of 1:45.76, and the team finished with a final time of 7:01.72.

In December of 2013 Dwyer traveled to Glasgow, Scotland to compete for Team USA at the Duel in the Pool classic, which pits America’s top swimmers against Europe’s fastest swimmers in a head-to-head short course meters swim meet. Dwyer opened the meet with a victory in the 400-meter IM with a time of 4:01.76, finishing just ahead of teammate Chase Kalisz, who finished in second place with a time of 4:02.40. Later that day, Dwyer fought hard for a third place finish in the hotly contested 400-meter freestyle. Dwyer finished behind fellow American and event winner Michael Klueh (3:39.94) as well as North Baltimore Aquatic Club training partner and European stalwart, Yannick Agnel (3:40.19). Just behind Dwyer were American Michael McBroom and European James Guy, who tied for fourth with a time of 3:40.57 and Matt McClean, who finished sixth with a time of 3:40.68. On day two, Dwyer again was crowned champion of the 200-meter freestyle, finishing with a time of 1:41.68, distancing himself from the field as second place Tyler Clary finished over two seconds behind with a time of 1:43.84. In his final swim of the meet, Dwyer again captured the win in the 200-meter IM with a time of 1:53.51, comfortably ahead of Europe’s runner-up, Roberto Pavoni (1:54.20) and American Kalisz (1:54.26). America went on to win the excitingly close dual meet by one point, 132-131, in large part to Dwyer’s success.

Going into the World Short Course Championships in Doha, Dwyer changed his training scenery. When training partners Yannick Agnel and Michael Phelps stepped away from North Baltimore Aquatic Club, he went west. Dwyer trained with veteran coaches, Dave Salo and Jon Urbanchek, in order to gear up for Doha. At the 2014 Championships, Dwyer won gold as a member of the U.S. 4×200-meter freestyle relay.

In 2015 Dwyer toured the country competing in the Arena Pro Series in cities such as Mesa, Charlotte and Santa Clara. In June he competed at its portion, and after that meet in Santa Clara wrapped up, Dwyer was named the Pro Series Champ. Dwyer was actually so far ahead on the leaderboard that he didn’t even need to swim at Santa Clara in order to win the Series. His total prize money of $12,000 and a new 1-year BMW lease was the second year in a row that Dwyer was named the winner.

On the first night at the US Olympic Trials, Dwyer sealed his spot on the plane to Rio with a silver in the 400 meter freestyle. Two days later he picked up another two events with a silver in the 200 meter freestyle adding a individual and relay to his Olympic schedule. He stormed out in front and the title looked to be his through 150 meters. But Townley Haas and Jack Conger had tremendous final 50’s. Haas managed to out touch Dwyer by 0.01 but Conger ran out of pool and finished 3rd.

This video is of Jimmy Feigen????

They changed the video

Whoah I didn’t know he was a walk on, a story of no matter where you are you can rise