Medeiros Swims Top Five Times in the 50 and 100 Freestyle 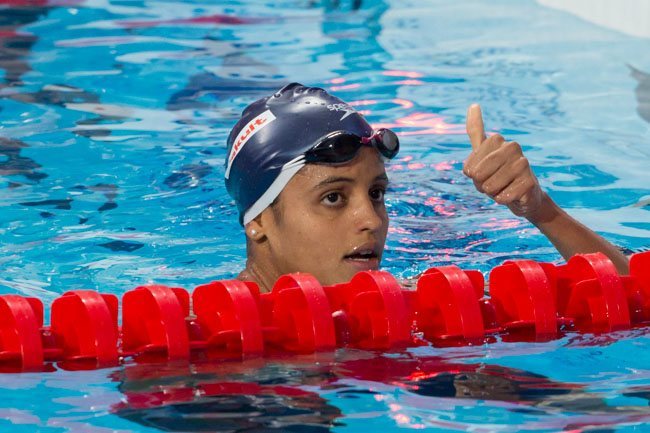 Brazilian star Etiene Medeiros and her SESI-SP teammates will not be making the trip to Tokyo for the World Cup, which begins on Wednesday.

This will be the second year in a row that the club does not have the financial resources to support their top swimmers to make the trip to World Cup competitions.

Because of this fact they put on a short course meet this weekend where 20 teams and 299 swimmers competed.

Medeiros, who finished second in the 50 backstroke in Kazan, was the star winning the 50 and 100 freestyle as well as the 100 backstroke. Her time of 24.86 in the 50 freestyle puts her in a tie with Australian Shayna Jack for the top spot in the world rankings.

Because the World Cup series of competitions are being held in long course pools the short course world rankings are not as fast as they have been in past years.

Medeiros also came second to Daynara de Paula in the 100 butterfly. Daynara took the event in a time of 59.12 followed by Medeiros who posted a 1:00.06.

Dear Jeff Grace I would like to comment this article of Etiene Medeiros. We are preparing for the Brazilian national trials for the Olympic Games that to be held in December 2015 and April 2016. We will have two opportunities for it to make the necessary times to participate in the Rio 2016 Games. In our program we had the military world championships in Korea last September and we think that participating in the Japan World Cup in sequence It would not be appropriate for the training phase we are prioritized. SESI SP has participated in 2013 and 2014 ( so we participate last year ) from a training camp in Japan with the coach Norimasa Hirai and we always… Read more »