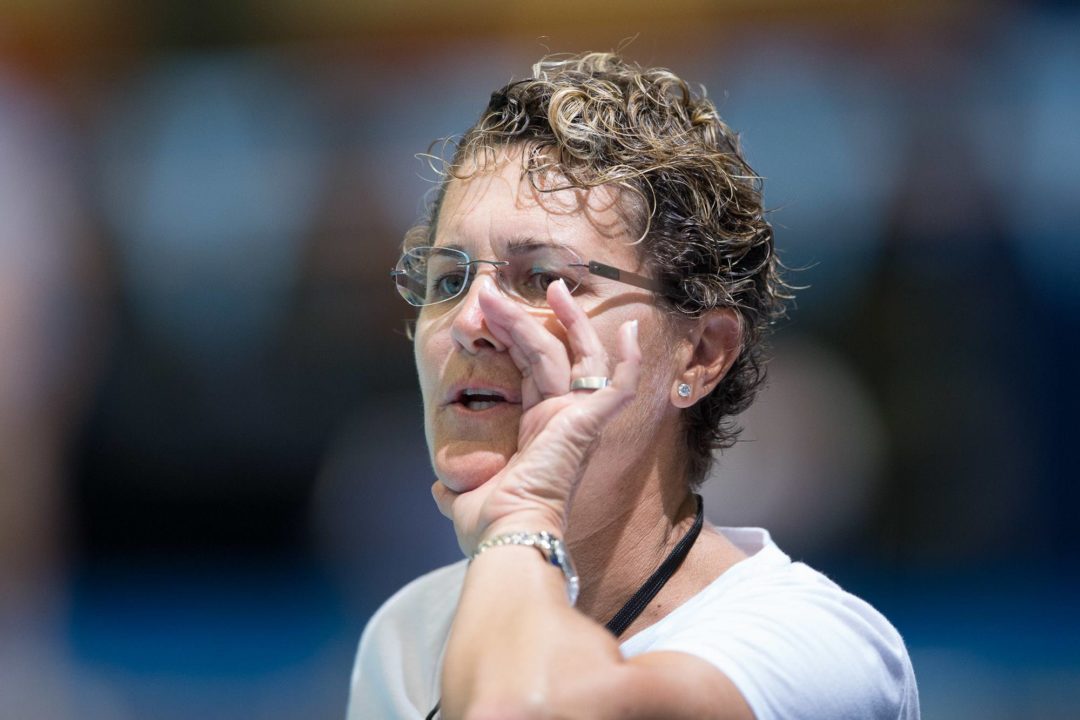 "I believe that we have a tremendous core group supporting our program and I have elected to maintain as a staff those people who understand us best." Archive photo via Tim Binning/TheSwimPictures.com

Teri McKeever, California’s head women’s coach, announced that Kathie Wickstrand will be joining the staff as an assistant coach. Wickstrand is replacing the former Assistant coach of nearly ten years, Kristen Cunnane. Cunnane stepped down from her role as the Associate Head Coach because it became “too much to give the California program and girls what they deserve, along with being able to give [her] family and children what they need.”

Kathie Wiskstrand coached collegiately at Northwestern, Purdue, and Illinois State. Over the years, Wickstrand has served as a mentor and consultant to McKeever. In a BearInsider article from 2013, they talked about about how McKeever was able to gain confidence as a coach because of her relationship with Wickstrand.

“She reached out to Kathie Wickstrand, a Northwestern coach whose swimmers were having fun at NCAA meets even without much success. Wickstrand-Gahen counseled McKeever for eight years, showing her that coaching is teaching first, winning second.” – BearInsider.com

California is coming off of a spectacular season. As a team, they won their fourth NCAA team title on seven years, had multiple NCAA Champions, broke two NCAA and American records, and had a swimmer, Missy Franklin, win the Swimmer of the Year award.

“I believe that we have a tremendous core group supporting our program and I have elected to maintain as a staff those people who understand us best.”

“I have known Kathie for 25 years and, perhaps more importantly, she knows our team, as well, having served as a consultant for us focusing on team building and group dynamics for many years. Kathie, a two-time Olympic Trials qualifier and silver medalist in the 400 free at the Pan Am Games, brings experience as a college head coach at Northwestern, Purdue and Illinois State. Since 1995, she has run her own company, The International Coaching Society, consulting with hundreds of companies, teams and individuals, including numerous Olympians and national team members, on ways to improve their effectiveness and achieve their desired goals. With Kathie on board every day, I feel that we will be in wonderful hands.”

this wil be … interesting. Go Bears!

Wow. Apparently I dated myself, by the looks of the down votes. Riviera Club in Indianapolis was a swimming powerhouse in the 1960’s (and beyond), when Kathie Wickstrand was a young age grouper there. The Club was founded on a 26 acre tract of land by the White River (hence, “White River Racing Team.”). It’s coach, the great Gene Lee, coached Olympians Kathy and Maddie Ellis, and other great swimmers, including Cress Templeton and Kathie Wickstrand. Hence, it was “Powered by Lee.” We had T-shirts with the “White RIver Racing Team Powered By Lee” logo on them and even chanted it at meets. I brought this up to recognize the great coaching legacy of Gene Lee, who died way too… Read more »

All of the down votes makes no sense to me. I remember swimming against Riviera as a kid living in Ohio. There were a ton of great swimmers on that team, and Gene Lee was a great coach. So, here is a thumbs up, SwimDoc.

Great hire, coach & person. She did a great job at all her positions.

Lately for every mention of the (NCAA champs) Cal swim team there are now a suspicious number of down votes at this site. Even as low as down voting the progress of the new pool?

I suspect this self serving envious troll is related and have recently discovered he or she can move around this sites’ tracking system for down votes,

Typically, these people are quite transparent. All you need to do is pay attention.