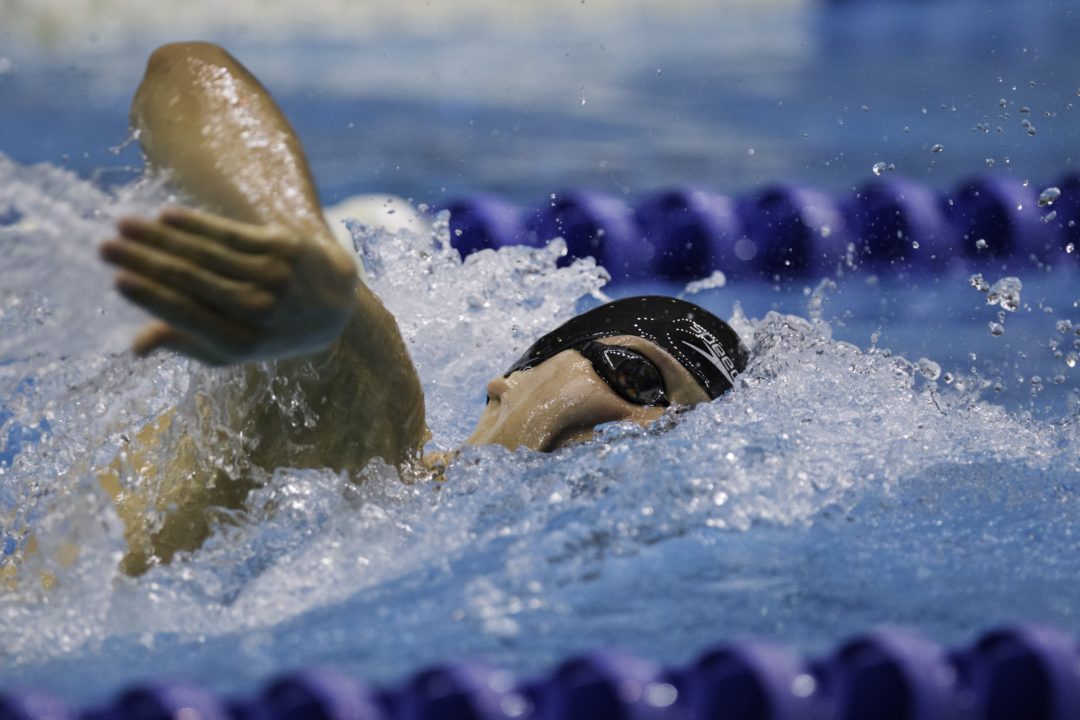 Liz Pelton’s American Record in the 200 backstroke was the highlight of the final session of the Georgia Invite, but the Cal women couldn’t upset the Georgia Bulldogs as Jack Bauerle’s women won their own invite by a comfortable margin of 115 points, even without some of their biggest-name swimmers, like Amber McDermott.

The Cal men, however, even without a big portion of their lineup were able to easily cruise past the Georgia men to win their meet title.

Auburn’s Katie Gardocki kicked off the third day of the meet with a win in the women’s 1650 in 16:18.77; the Tigers have been awaiting a breakout season from her, though for the senior this swim was a big slower than her time at the same meet in 2011. Then again, she had little competition as compared to the prior meet, with Virginia sophomore Kelly Offutt taking 2nd in 6:21.56, and the nex-fastest swimmer almost 10 seconds behind.

The men’s mile gave a bit more excitement as Georgia’s Matias Koski touched in 14:53.32, a personal best. That gave Koski a clean sweep of the three longest freestyle events at this meet, with wins in the 200, 500, and 1650.

He out-touched three swimmers who won All-American events in this event last season, including his teammate and defending national champ Martin Grodzki (14;57.07) as well as Olympic Trials champion Andrew Gemmell (14:59.97).

As spirits waned at the end of a long meet, the pool was re-energized in the women’s 200 back thanks to Liz Pelton’s NCAA Automatic Qualifying swim and American Record of 1:48.90 in the 200 back. (Read more about that record here). Pelton came home in a furious last 50 of 27.40 to break her own record of 1:49.16 set almost two years ago.

A pair of Harvard freshmen, Danielle Lee and Kendall Crawford, were 1st-and-2nd in the B-Final, respectively in 1:56.1’s.

Jacob Pebley wasn’t able to bring quite the same level of achievement to this 200 back as his Cal classmate Pelton did in the women’s race, but he still was plenty-fast with a 1:41.62. That’s the best time in the country this year. Auburn’s Kyle Owens took 2nd in 1:42.36, and Georgia freshman Ty Stewart was 3rd in 1:43.26 – the number-two time by a freshman this season.

After struggling on day 2 of this meet, Georgia senior Megan Romano bounced back on Sunday to win the women’s 100 free in 47.99 – another Automatic NCAA Qualifying Time for the Georgia Bulldogs. She took a big lead at the halfway mark ahead of teammate Allison Schmitt and was able to hold the margin right there at about half-a-second as Schmitt took 2nd in 48.42.

One would guess that these two international-level swimmers aren’t very rested, and perhaps even less so than some of their Georgia teammates. Though their times were good, if they hope to catch Cal they’ll need better than those times though as the freestyles should be Georgia’s big advantage.

Their junior teammate Shannon Vreeland was 3rd in 48.69.

Penn State freshman Alyson Ackman was 4th in 49.06; though her senior teammate Paige Whitmire added a second in finals to take 8th, the Nittany Lions will be happy to have found a second sprint freestyler, and one with youth to boot. They have very good medley relays this year, but with a second sprinter could sneak a few NCAA points out of their free relays as well.

Auburn’s Marcelo Chierighini was a best time in the 50 freestyle earlier in this meet, and though he wasn’t the same in his 100, his 42.73 is a very good mid-season time. It’s about where he was at this same meet last season. Chierighini now ranks 3rd in the country in 2012 among college swimmers.

In the past few weeks we’ve seen great 200 breaststrokes from the Lone Star pairing of Breeja Larson and Laura Sogar at A&M and Texas, respectively; now it was Caitlin Leverenz’s chance to match them.

She’s the defending NCAA Champion and the third-fastest ever, but a 2:06.46 doesn’t quite match up to the other times we’ve seen this year around the country.

Then again, it’s still four-tenths better than Leverenz was mid-season in the 2011-2012 season, so the relative early speed of Larson and Sogar skews things a bit.

Nobody else was better than a 2:13 from any of the three finals.

Harvard’s Chuck Katis won his second breaststroke race in as many days with a 1:54.08 in the 200 – crushing his own School Record of 1:56.49 by more than two seconds. That record matched the one he set in the 100 on Saturday, and a big back-half broke a deadlock with Cal senior Trevor Hoyt, who was 2nd in 1:54.82.

Katis is only a sophomore and now has an NCAA Automatic Qualifying Time in this 200 as well as the 100, and he’ll now be able to settle into some tough training headed toward NCAA’s without having to worry about qualifying.

Cal freshman Rachel Bootsma came to Berkeley known as a sprinter, much like her teammate Caitlin Leverenz who came to Teri McKeever with a lot of all-around abilities, but was best-known for her specialties in the breaststrokes and IM’s.

Both swimmers, however, were much more versatile than perceived to be, and McKeever has a way of bringing that versatility out in her swimmers. The pair tied in the 200 fly with 1:55.69’s, both NCAA B-times.

Harvard’s Courtney Otto, who was an Olympic Trials semi-finalist in this race, was 3rd in 1:56.24: a personal best for her. Last year she peaked at this meet mid-season; this season she’ll try to do that at NCAA’s instead.

Cal’s Will Hamilton reaffirmed his presence as a contender to repeat as champion in the men’s 200 fly, despite what his teammate Tom Shields did this weekend at Winter Nationals, with a 1:42.75 automatic qualifying time on Sunday. That’s the fastest time in the country this year by a swimmer who is actually competing collegiately in the fall semester.

That time won’t be enough to win the NCAA title in this event, but if they can swim that well again without using Allison Schmitt (allowing her to be saved as, say, a butterflier on both medleys), it will go a long way toward their bid to upset Cal for the team title.

The Auburn Tigers dominated this 400 free relay in 2:51.46, the second-best time nationally this season. The group of Alex Hancock (43.60), James Disney-May (43.18), Kyle Owens (42.21!) and Marcelo Chierighini (42.47) took an easy win in this race; they will have a lot of confidence in those last three legs at NCAA’s, and if the New Zealander Hancock continues to improve they could be NCAA Champions in the event.

Why is Shields red-shirting this semester at Cal? He’s swimming well so it can’t be an injury.

ah ok thanks. Good for him. Now is the best time to do it.

What does that sentence mean?

just substitute put for but