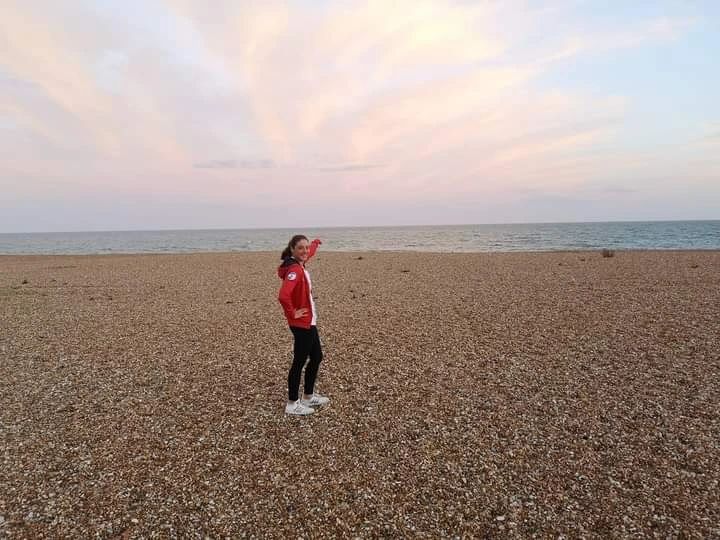 Marion Jaffe lopped 20 minutes off the record for the fastest ever French woman across the English Channel over the weekend. Current photo via Marion Joffle

French woman Marion Joffle has become the fastest female from her country ever across the Channel, and fourth-fastest swimmer of any gender.

Joffle completed her swim on Monday, swimming from the UK to France and finishing at Cap Gris-Nez. She completed the swim in 9 hours, 22 minutes, which broke the old French women’s record of 9 hours, 42 minutes that was set by Marion Hans in 1994.

The swim has not yet been publicly ratified by the Channel Swimming Association, but it is expected to be.

Of the two boundary nations to the Channel (or “La Manche,” as the French call it), the French have generally been less prolific than their English counterparts. The Channel Swimming Association has only ratified 28 solo French crossings of the channel, with the first coming in 1958. The association recognized 309 swims by English crossers, with the first coming in 1875 by Matthew Webb (the first recognized crossing).

In total, the CSA recognizes 1,795 successful solo swims since Webb’s first crossing, with 47 coming in 2022.

The 24-year old Joffle has a growing reputation in open water and adventure swimming. She won two silver medals at the 2022 Ice Swimming World Championships and holds the World Record for the fastest 50 and 100 meter ice breaststrokes in history.

Joffle still would have to drop substantial time to catch the fastest woman ever. That record for a one-way swim is held by Czech Republic’s Yvetta Hlavacova, who crossed in 7 hours, 25 minutes in 2006. The fastest one-way crossing by a man belongs to Australian Trent Grimsey, who did the crossing in 2012: a year after winning a silver medal at the FINA World Aquatics Championships in the 25k. He completed the swim in 6 hours, 55 minutes, which broke the record by two minutes.

Joffe posted pictures and videos of her record-setting swim on Instagram:

looks like a beach near Folkestone.
Great swim, 9 hours is lightning quick!

During such pointless excursions, I always root for the sharks.

We need to send out Lilly King to do the ice breaststroke. Whatever that is

There’s an “ice mile” swim that is generally swum in 5C water, which is about 40-41F. Just a suit, cap, goggles. I assume the ‘ice’ referred to in this article is in line with the 5C temp.

Congratulations! Does anyone know why they swim from England to France? Is it a matter of visas or record consistency or currents perhaps?

It’s actually illegal to attempt to cross the channel by starting from french grounds since 1999.
I think it’s to prevent migrants from attempting to cross, since many african and east european migrants cross France only to reach the UK.

Thank you for the clarification. She must be glad to be back home.