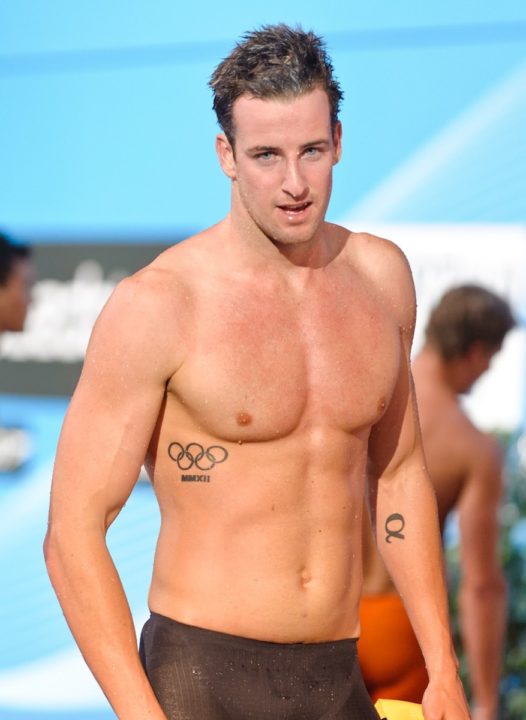 Despite Day 1’s prelims being delayed an hour due to lightning, the first session of the Victorian Open Championships did not disappoint. Sprinter James Magnussen made his much-anticipated post-surgery debut and we saw a battle brewing between two distance studs in Australian Mack Horton and Canadian Ryan Cochrane.

Female aces such as Emma McKeon and Madeline Groves, were also out in full force, bringing us their first swims of the competition.

19-year-old World Championship bronze medalist Mack Horton channeled the sky’s lightning into his stroke, as he topped the men’s 400m freestyle field by a mighty margin. 3:49.87 was what Horton clocked this morning, to finish almost 3 seconds ahead of teammate David McKeon and almost 4 seconds ahead of Canada’s Cochrane.

Cochrane and Horton were in the same heat, where Horton maintained about a double body length lead the entire way. Horton was the only man to register a sub-3:50 outing, as McKeon and Cochrane logged prelims times of 3:52.55 and 3:53.80, respectively. With his morning performance, the Melbourne Vicentre Swimming Club swimmer is showing definite positive signs that he’s well-recovered from the nasty parasite that robbed him of his strength in Kazan.

The men’s 100m freestyle brought Magnussen back into the sprint fold, signifying the 24-year-old’s first race after his shoulder surgery last summer. Maggie and his coaches have commented on how his recovery has come along nicely, both in the pool and out, and it showed tonight, with the Ravenswood swimmer clocking the field’s top time of the morning.

Double World Champion Mitch Larkin topped the 50m backstroke field, leading the men in a time of 25.39, just ahead of 24-year-old Ben Treffers‘ 25.56.

Of note, Scottish swimmer Michael Jamieson raced the men’s 50m breaststroke, earning a time of 29.77 for 12th and out of the final in the event, not typically his strongest of the 3 breaststroke distances.

Although not an Olympic event, the women’s 50m butterfly is shaping up to be a fury of speed come tonight’s final. Led by Emma McKeon‘s 26.48, Madeline Groves also scored a sub-27-second mark, touching in 26.67 for the 2nd seed. Veteran athlete Alicia Coutts held her own as well, making the final with the 3rd-swiftest time of the morning (27.12), while young “Western Australian Junior Athlete of the Year”, Brianna Throssell, also did some damage with her time of 27.30 to claim the 5th seed.

Several women doubled up on their butterfly swims with speedy performances in the 100m freestyle as well. McKeon led the charge, claiming her 2nd top seed of the morning with a time of 54.70, the only sub-55-second swim of prelims.  In fact it was a St. Peters Western sweep of the top 3 seeds, as McKeon was followed by teammates Bronte Barratt (55.45) and Groves (55.57). Coutts also made her 2nd final, touching in 56.04 for the 5th seed in the women’s 100m freestyle.

In the absence of megastar bacsktroker Emily Seebohm, Hilary Caldwell took the top seed in the women’s 200m back, scoring a mark of 2:10.32. Madison Wilson nabbed the 2nd seed just .17 of a second behind, touching in 2:10.49. Seasoned athlete Belinda Hocking rounded out the top 3 seeds, snatching a time of 2:11.60, more than 2 seconds quicker than her incoming seed time.

Magnussen won the M100free final in 49.35 ahead of To 49.68 & Smith 49.89. He’d probably take that for a first race outing post operation. Whether he may be added to the AUS team for the Super Series in a couple of weeks remains to be seen but we will probably get a far better read at NSW Titles (4-6 March) which is traditionally the last major competitive hit-out prior to Trials.

The most noteworthy performances of the night have been Georgia Bohl winning W100BRS in 1.06.98 (a significant PB) & Madi Wilson winning the W200BK in 2.07.18 (another significant PB and laying down a very strong “marker” for the 2nd individual spot in this event).

Australian trials will be swimming in Adelaide from 7th to 14th on April.

Not bad. When are Australian Trials? If Magnussen can go sub-50 in finals, he may yet be a factor in Rio.