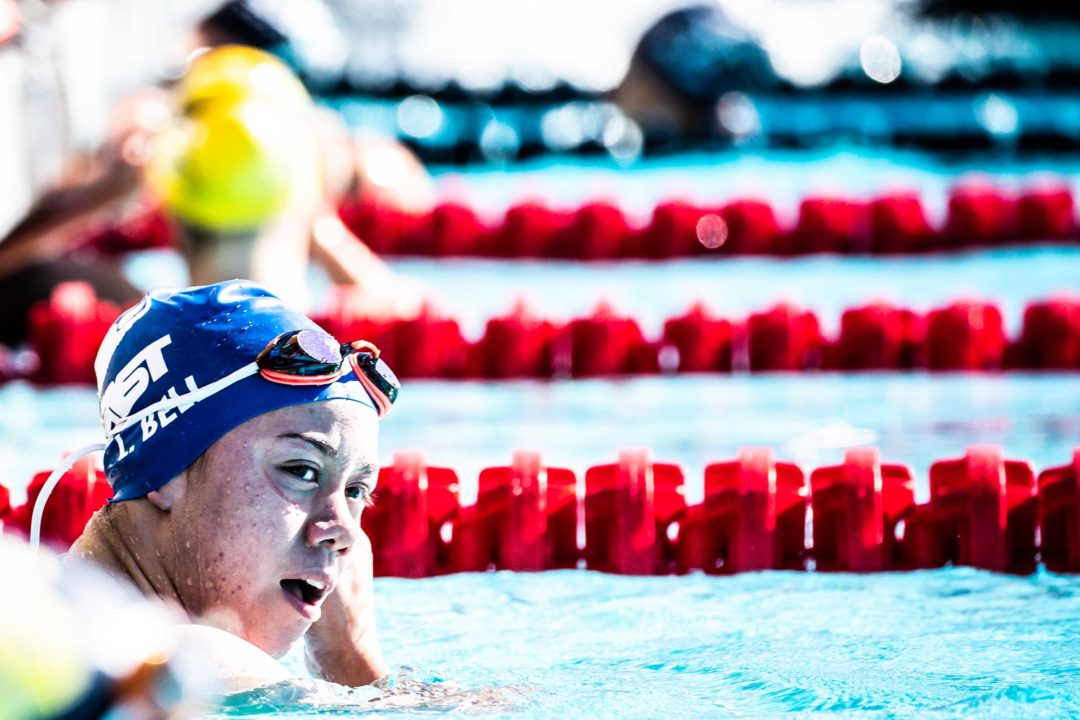 Lucy Bell has dropped almost a second in the 200 fly over the past month and a half. She climbed the all-time 15-16 rankings with a 1:54.93 over the weekend. Archive photo via Jack Spitser/Spitser Photography

Lucy Bell has dropped almost a second in the 200 fly over the past month and a half. She climbed the all-time 15-16 rankings with a 1:54.93 over the weekend.

Bell swam at the FAST Winter Showcase with her Fort Collins Area Swim Team. The meet was livestreamed via YouTube, and you can find race videos here.

We already had Bell ranked as one of the top ten recruits in the nation among the current crop of high school juniors. That was due in large part to a strong 1:55.85 lifetime-best in the 200-yard fly – one of the top times in the class. But she has already bettered that swim twice since our rankings in March. First, she went 1:55.15 in late October. Then, she crept under the 1:55-barrier this past weekend.

Bell passes Katie Hoff in USA Swimming’s all-time rankings for the 15-16 age group. And Bell’s swim was also at altitude in Colorado, suggesting she might be in for an even bigger time drop if she gets a chance to compete at a lower altitude before aging up.

At the same meet, Bell went 1:57.74 for her first 200 IM swim under 1:58. Bell remains a ‘free agent’ in college recruiting, without a known verbal commitment yet.

In another notable swim from the same meet, Bell’s 16-year-old FAST teammate Renee Gillilan went 1:56.71 in the 200 fly, finishing second. That’s a drop of about a second and a half, and moves Gillian to #45 in USA Swimming’s age group history. Gillilan is another top 20 recruit in the class of 2022, and is verbally committed to join her older sister Coleen at Notre Dame.

With altitude adjustment times Bell would move up tied for 6th (1:53.73) and Gillilan would skyrocket to 21st (1:55.51). Hopefully they will have a sea level meet someday soon.