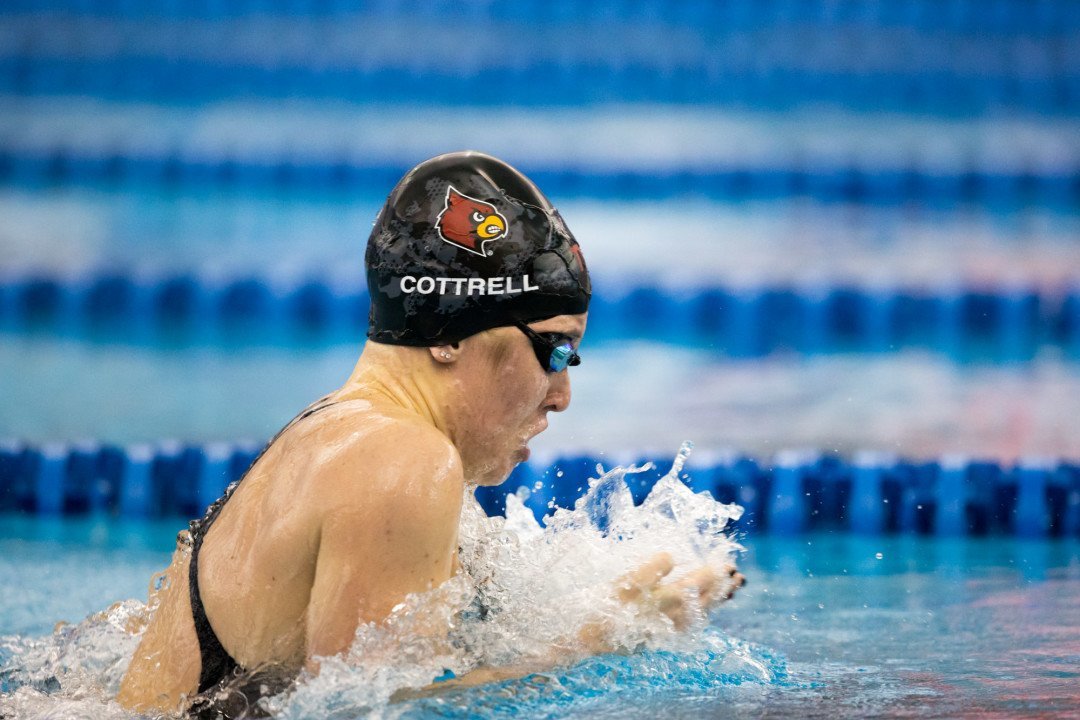 On the women's side, breaststroker Andee Cottrell took on an individual triple, collecting a pair of wins and a 2nd place finish. Archive photo via Tim Binning/TheSwimPictures.com

The Louisville seniors had a strong showing in their senior day meet, with the Cardinals defeating Notre Dame at home. On the women’s side, breaststroker Andee Cottrell took on an individual triple, collecting a pair of wins and a 2nd place finish. She swept her signature breaststroke events, charging to a 1:00.80 in the 100 breast and a 2:12.52 in the 200 breast. She closed out her schedule in the 200 IM, where she posted a 2:02.73 to take 2nd behind teammate Rachael Bradford-Feldman (2:01.51).

Louisville’s Carlos Claverie, the top breaststroker on the men’s squad, swam in the same 3 individual races. He squared off with Notre Dame’s Trent Jackson, first winning the 100 breast in 54.65 to Jackson’s 55.05. Claverie then completed the sweep in the 200 breast, where he built a 2 second lead over Jackson (2:01.56) to win with a quick 1:59.30. He returned to the pool for his final race in the 200 IM, remaining undefeated for the day with his winning time of 1:49.48.

Backstroker Grigory Tarasevich, another Louisville senior, pulled off a winning double. In the 100 back, he used his back half speed to break away from Notre Dame’s Robby Whitacre, winning in 47.98 ahead of Whitacre’s 49.04. Both swimmers returned for an exciting race in the 200 back. Whitacre (1:45.90) led through the first 150 yards, but Tarasevich blasted a 25.43 final split to win the race in 1:44.68. That closing split was just 2 tenths slower than his 25.23 on the first 50.

LOUISVILLE, Ky. – The University of Louisville No. 7/10 swimming and diving team used 14 NCAA B-cut times to edge the University of Notre Dame on Friday at Ralph Wright Natatorium.

“It was Senior Day, which is always special, especially with this group and really the four-year impact on a program, it’s hard to overlook that. More importantly, it’s bittersweet,” UofL head coach Arthur Albiero said after the win. “These guys are part of our family here and I’m so proud of the men and women they have become and, obviously, as we finish this season here and put some great performances together, they were the leaders today. Senior Day always brings a little bit of mixed emotions so I think it took us a little bit to get going. But a win is a win against a good team. I think we’re battling a lot of things here internally and making decisions about conference teams and a lot of different things. We’ll take it and we’re excited and we’ll get ready for the next one which is right around the corner. A good team win today, good energy, good crowd, and that’s what college meets are all about.”

In the longest event of the meet, Louisville swept the 1,000 free with Marah Pugh at 10:05.31 touching first for the women and Marcelo Acosta posting a time of 9:08.51 for the men.

Tonight’s meet versus Notre Dame was the last home meet for 19 seniors.

Louisville is back in action when they make the trip to Lexington to take on in-state rival, Kentucky, tomorrow at 1 p.m.

NOTRE DAME, Ind. —  The University of Notre Dame swimming and diving program had a solid day of swimming but fell to the top-25 ranked Louisville Cardinals.  The Fighting Irish women fell in a close competition, 160-140, and the men fell, 179-121.

Head Coach Mike Litzinger was satisfied by what he saw from his squad against Louisville.

“We had a great meet with Louisville this afternoon. Both of our teams continued to compete and race until the last event.”

Litzinger was referencing the fact that his women’s squad tied the score late after Sofia Revilak, (54.21) and Erin Sheehan (54.66) went first and second in the 100 yard butterfly. The Cardinals responded by taking points in diving and sweeping the first three spots in the 200 yard IM. The Irish weren’t done competing and took a hard earned win in the 200-yard freestyle relay with the foursome of Katie Smith, Abbie Dolan, Sofia Revilak and Catherine Mulquin clocking in at 1:31.33 but it wouldn’t be enough to catch Louisville who would take second place points in the event to pad their lead and earn the win.

200 Medley Relay
The men’s relay teams earned first in third in the event. Robby Whitacre, Trent Jackson, Justin Plaschka and Tabahn Afrik timed in at 1:29.20. Seconds behind were teammates Jack Montesi, Steven Shek, Matt Grauslys and Daniel Speers tapping the board at 1:29.48.

Women’s 200 Freestyle
The Irish earned first and second points for the team with Abbie Dolan clocking a 1:46.87 and Lauren Heller tapping in at 1:49.52. Notre Dame’s 1-2 punch was good enough to defeat the defending ACC 200 freestyle champion.

Women’s 100 Backstroke
Catherine Mulquin won the race swimming at 54.58 and it was good enough for a NCAA ‘B’ cut time. Teammate Alice Treuth came in third with a time of 55.38.

Women’s 100 Breaststroke
Teammates Trent Jackson and Steven Shek earned second and third in the event. Jackson coming in at 55.05. Good enough for a NCAA ‘B’ cut. Shek coming shortly behind at 56.12.

Women’s 50 Freestyle
The Fighting Irish men and women took first place honors in the event. Justin Plaschka winning with a time of 20.35. Katie Smith came in first coming in at 22.82. Earning a NCAA ‘B’ cut time.

Women’s 100 Freestyle
Abbie Dolan won the event tapping the board at 50.10. Teammate Catherine Mulquin came in third with a time of 51.00. On the men’s side Tabahn Afrik earned second place points timing in at 44.50.

Men’s 200 Breaststroke
For a second time in the meet it was the Notre Dame men earning second and third in the result. Trent Jackson at 2:01.56 and Steven Shekswimming in at 2:03.64.

Women’s 500 Yard Freestyle
The Fighting Irish women earned second and third in the event. Molly Treble swimming a time of 4:57.45. Reilly Lanigan coming behind her in a time of 4:58.51.

The Fighting Irish are back in action tomorrow afternoon down state in Indianapolis to face Indiana University–Purdue University Indianapolis. Swimming starts at 1 p.m. ET and fans can follow live results of the meet on both team Twitter accounts, @NDWSwimDive and @NDMensswimdive, with a complete recap posted to und.com at the conclusion of the meet.

Wow – solid performance by ND, to be relatively close to powerhouse Louisville. Looked like a dog fight.

It’s going to be hard for them but the’ll pull through. Really tough team of athletes and coaches!