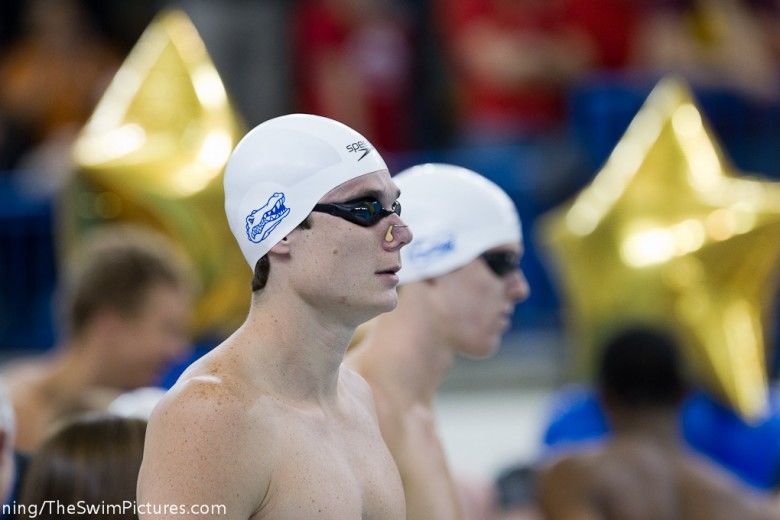 The Brits continued to roar through their second round of Olympic qualifying in Sheffield, as four new swimmers should be etched onto the British Record books by way of today’s swimming. That includes a new British Age Record from budding superstar breaststroker Molly Renshaw.

But British swimming isn’t committing to anybody just yet. Until they see the full lay of the landscape, and are certain that the number of qualifiers is under the limit they sent to FINA, they won’t officially declare anybody to the team.

Click here to read all about the British qualifying standards.

After a great battle in the men’s 400 free on Wednesday, where David Carry was the victor, Great Britain’s Ieuan Lloyd took revenge for the youth with a 1:47.55 to stamp his ticket for the Olympic Games.

Lloyd had the upper-hand already with a 1:47.68 from March’s Trials, but by winning this race over the veteran Carry he ensured that the spot behind Robbie Renwick would be his.

Lloyd broke the battle open with a great third-50 meters, where he was half-a-second better than Carry. Even though Carry had a superior closing 50 meters again, the difference wasn’t nearly as significant as it was in the 400 and Lloyd held on for the victory.

Carry’s 1;47.86 slides him into position to be on the British 800 free relay however, .01 behind Robert Bale’s time from British Trials. Bale, not necessarily putting too much effort into an individual spot in this race, swam a 1:48.97 here in Sheffield for 3rd.

Sixteen-year old Molly Renshaw, just aged up 6 weeks ago, crushed the 200 breaststroke National Age Record for 16 year olds with a 2:27.72 in the women’s race. That’s actually not her best time (she was a 2:26.8 in March), but now that she’s 16 it gives her a whole new set of records to break.

The British, in their history, haven’t really had an elite breaststroker of this caliber before – she broke Charlotte Barnes’ old record of 2:29.37 by over a second-and-a-half. Renshaw, despite only being 16, now has at least the 11 fastest times ever swum by a British 11-and-under.

Though she was slower than in March, without anybody beating her she confirmed a likely Olympic spot based on her swim from March.

With two spots available, and a pair of swimmers easily capable of the FINA Automatic Qualifying Time, the Brits gave a big injection to their roster with Chris Walker-Hebborn (1:57.17) and Marco Loughran (1:58.34) both nailing-down their spots for the Olympics.

Neither was a personal best, but Walker-Hebborn did chop .03 off of his textile best from this same meet last year – a meet he needed then as well to make his qualifying.

Loughran, who was kept from the win by a slow start, was also off of his best time, but also very close to what he did at this meet last year. In fact, his time was identical, to the hundreth, to last June. Coincidentally, this is the 4th time in his career that he’s put up that identical mark.

There were no individual Olympic spots up for grabs in this 100 free, but Britain’s number-two individual qualifier Amy Smith did take the win in 55.03. That’s almost exactly a second slower than she was at March’s Trials, but still a time she has to be happy with given the heavy training we’ve seen out of the majority of the Loughborough crew.

Jessica Lloyd took 2nd in 55.34; though that wasn’t her best time of the season it did seal-up her spot on the 400 free relay that should now officially include a finals group of Fran Halsall, Lloyd, Smith, and Rebecca Turner.