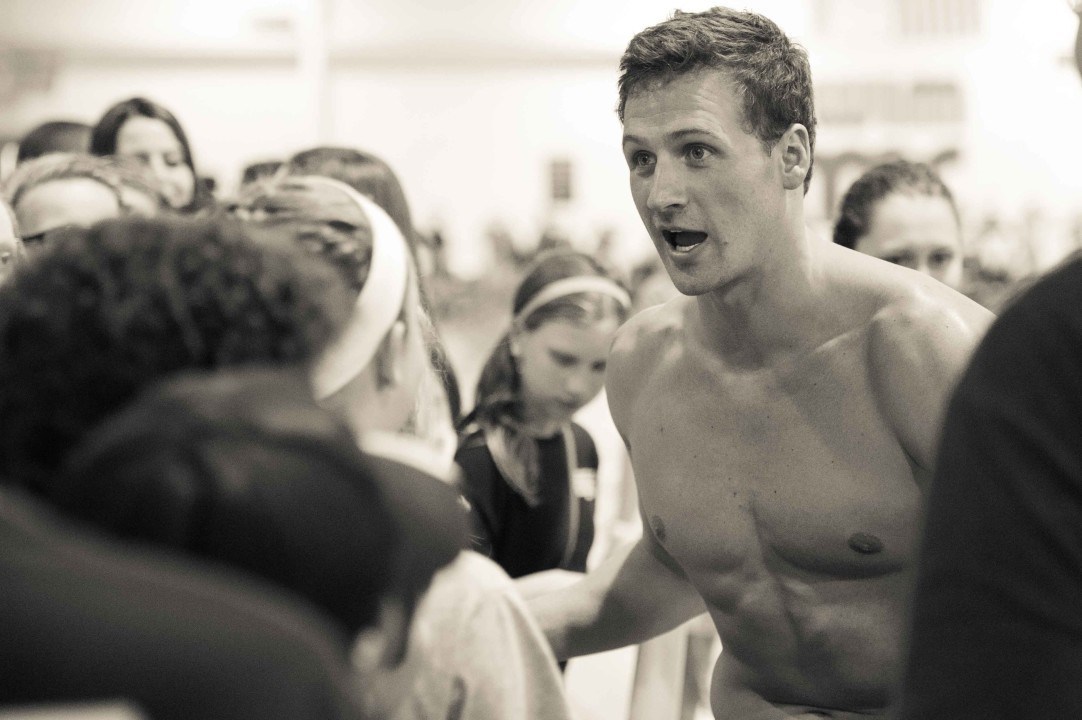 Swim nerds everywhere got into a frenzy last week upon reading a tweet from Olympian Ryan Lochte‘s training group, @SwimMACElite.  In fact, the post highlighted SwimSwam’s ‘Top Ten Tweets of the Week’ at the number four spot, due to its secretive puzzle.

The tweet, alluding to an incredible feat accomplished in an everyday practice for the world-class athletes based in Charlotte, North Carolina, read as follows:

Saw today that sub 5-min 500yd back was possible

For the past week, SwimSwammers fired off their guesses as to who the owned sub-5:00 500 yard backstroke in-practice performance. ‘MARKSTER’ simply responded to the post with “My guess is Clary”, while other readers got more specific.  ‘@HollywoodinDC’ submitted a blanket time of 4:53.57, while yours truly (@RettaRace) threw out a guess of 4:57.60, each not associating the time with a particular swimmer.  ‘SWIMDOC’ came out with yet another plot twist-guess of, “Who says it was a guy?  What about Coventry?”

Heading straight to the source, SwimMAC Elite Assistant Coach Christie Shefchunas was able to give SwimSwam and our readers the answer.  And the answer is…..both Ryan Lochte and Tyler Clary clocked sub-5:00 500 backstrokes in practice last week.

We’re told the two performed the achievement as part of a 3-round monster set, with 1300 yards a round, each with a 500 backstroke as the ending swim.  The first round had the 500 as ‘strong build’, second round had it as ‘stronger build’, while the third round was to be at ‘race’.

Now, the next mystery to be solved is how we mere mortals can replicate their performances.

Our Masters coach Olympic Gold/ Silver medalist Whitney Hedgepeth recently gave us a set of 12 x 200IM’s followed by 12 x 100IM’s…and I was complaining….she told us about one of her toughest sets.

Was surprised to see Coventry in the headlines. She’s still a long way off, she is a legend in the sport but its doubtful she’ll even make any finals in Rio. She couldn’t. make it past prelims in the 200IM and barely scraped into the semis 100/200back. At 32years she’s quite old and should be considering retirement. Good luck to her but she’ll be battling in Rio!!…

Was surprised to see Coventry in the headlines. She’s still a long way off, she is a legend in the sport but its doubtful she’ll even make any finals in Rio. She couldn’t. make it past prelims in the 200IM and barely scraped into the semis 100/200back. At 32years she’s quite old and should be considering retirement. Good luck to her but she’ll be battling in Rio

Carey was pissed he didn’t go faster. Lol! 4:44 is an impressive effort for backstroke on the end of the set. Sounds like Lochte was making a statement with an exclamation point on it. Been there, done that.

Anyone surprised they’re swimming SCY in practice in an Olympic year? Is it to break the monotony, pool issues, to work on underwaters? Somehow I don’t see Phelps training in a SCY pool right now.

0
0
Reply
Back in a day
Reply to  swimdoc

I’m surprise he is still there ….
Should be doing 8×400 m be on 5 right now,just like he did back in a day …
Monster set from swimmac use to be warm up set

Pretty sure their pool is getting a new roof. Not sure if its done yet, or how they organize their elite teams practice around the rest of their age group and senior programs. So, even in an Olympic year, I’ve heard a lot of coaches will still train a lot of yards to help maintain technique. It also could be one yards practice in a week of long course practices.

Conger and Murphy could do that.