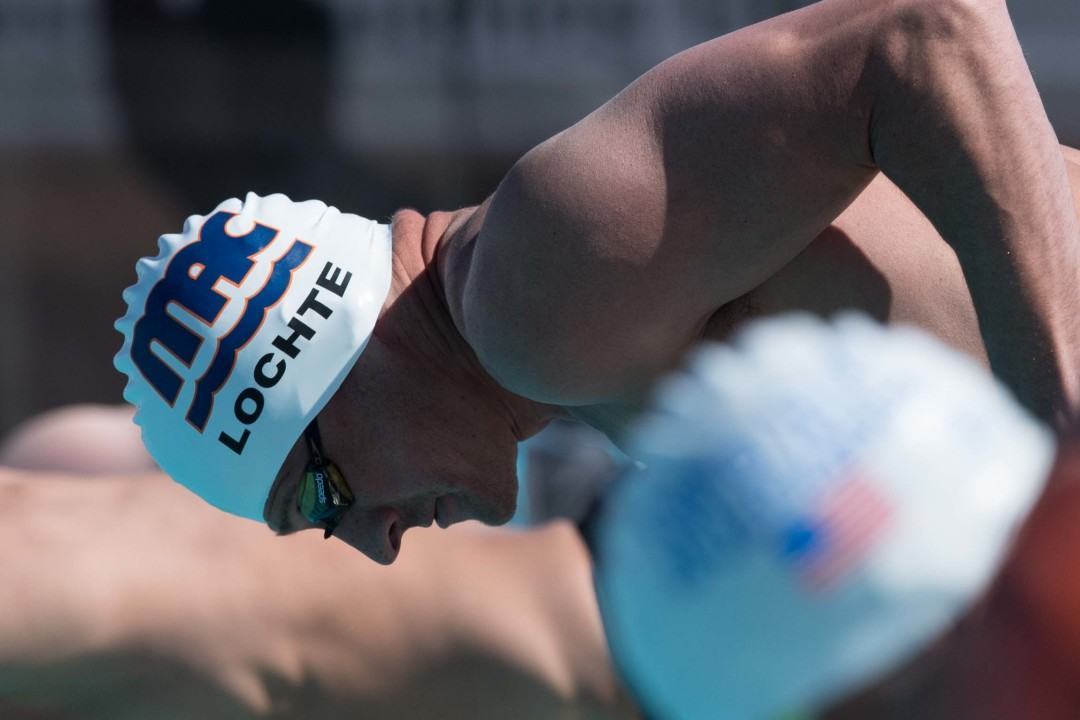 Olympian Ryan Lochte is taking every opportunity to put on a show for his home fans - or at least he'll have the option to, after entering 7 events at the Arena Pro Swim Series in Charlotte. Archive photo via Mike Lewis/Ola Vista Photography

Olympian Ryan Lochte is taking every opportunity to put on a show for his home fans – or at least he’ll have the option to, after entering 7 events at the Arena Pro Swim Series in Charlotte.

7 is the maximum number of individual races a swimmer can take on in a single Pro Swim Series meet, though Lochte could still scratch out of any of those races as the meet gets closer. He’s currently entered in the following slate of races:

The meet is essentially a home competition for Lochte, who now trains out of SwimMAC Carolina’s professional group.

USA Swimming’s early press release touted individual Olympic gold medalists Lochte, Tyler Clary and Dana Vollmer as the domestic headliners. (Clary will swim the 200 free, 100 breast, 200 fly, 100 back and 200 back, while Vollmer is entered in the 100 fly, 50 free, 50 fly and 100 free).

There is also a solid Canadian contingent, including rising stars Penny Oleksiak and Taylor Ruck, who just qualified for the Canadian Olympic team at age 15. Jamaican breaststroker Alia Atkinson is on the psychs, as is Olympic bronze medalist Arkady Vyatchanin, who is still working towards his Serbian sports citizenship.

Here’s a non-exhaustive list of some of the other notable U.S. names on the psych sheets:

I didn’t think Ruck qualified for the Canadian Olympic team? What event? Did they make an exception for her?

weirdo – she’s going as part of the 4×200 free relay, presumably as an alternate/prelims swimmer: http://swimswam.com/swimming-canada-releases-official-list-nominees-2016-olympic-games/

Pretty sure Taylor Ruck was picked for the 4 x100 free relay, even though you keep reporting it was for 4 x 200. She got a FINA A cut in the 100 free last summer, and that is how she made the team.

Canadian Swim Fan – your confidence notwithstanding, you’re incorrect. She was chosen for the 4×200. Here’s the official Canadian Olympic tracker if you don’t believe us: http://olympic.ca/rio-2016-qualification-tracker/

Ok, I stand corrected. This article is misleading then: https://www.swimming.ca/en/news/2016/05/05/relay-teams-set-race-charlotte/ It says that Canada is sending their 4 x 100 free relays and 4 X100 medley relays to Charlotte. (not the 4 x 200), and Taylor Ruck is entered as a Swimming Canada swimmer. Kennedy Goss, who is on the 4 x 200 is entered in the meet, but not under Swimming Canada.

Which meet is Beisel swimming in? http://swimswam.com/elizabeth-beisel-natalie-coughlin-added-atlanta-classic-lineup/

Beisel is going to Atlanta.. Why is her name on both psych sheets?

((1) Beisel is apparently entered in two different meets on the same weekend – this one one and the one in Atlanta.
I presume she will actually swim in Atlanta where both Florida and Bluefish and the stronger IM fields will be?

(2) Kathleen Baker swimming in Charlotte, but no other Cal swimmers are there. I understand that Baker has ties to the area and SwimMAC, but when will Pelton and Bootsma appear in a LC meet? It’s understandable if they are out of action for their college commencement, but at this point it’s going to be a bit late in the season when they get back to LC racing.

I have the feeling that Pelton didn’t really have the olympics on her radar. She didn’t seem as into it this collegiate year. I have no basis for this, just a feeling.

Lochte again signing up for a bunch of events that he won’t swim. My guess he doesn’t swim the 50’s because it’s a waste of time and effort and not his strength.

Who in the L scheduled the Arena Pro Swim Charlotte and the Atlanta Classic at the same damn time? Two cities less than 3 hours apart and nobody could communicate.

Everyone for themselves. There.might be a couple $’s involved all it takes is to get some commitments as this is the enterprise system the pool might have been a draw at second meet.

Beisel is a superheroine. She will swim at 2 different meets at the same time next weekend! 🙂

First time we can see Lilly King swim in long course since early December.
The battle with Meili is gonna be a preview of next trials.