Local Girl Masson adds to Another Night of Records #SNAGS1 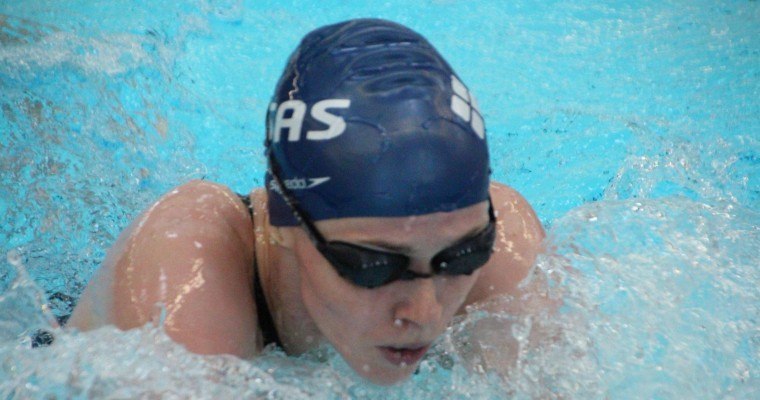 After another electrifying evening, another set of records fell on day 3 of the Scottish Gas National Age Groups Championships being held at the new Aquatics Centre in Aberdeen. Current photo via Scottish Swimming

The Manchester Aquatics Centre is once again set to host an elite competition with the inaugural British Swimming Invitation Meet.

The following is a press release courtesy of Scottish Swimming:

After another electrifying evening, another set of records fell on day 3 of the Scottish Gas National Age Groups Championships being held at the new Aquatics Centre in Aberdeen.

On the eve of her 16th birthday, Carnegie’s Tain Bruce not only broker the 15 years Scottish National Age Group Record in the 50m freestyle (26.20), she broke the Scottish Junior Record in the 200m IM, posting a new best standard of 2:17.29. Her Carnegie team-mate, Samantha Caufield won silver in 2:21.68 and Kiki Anderson from Hong Kong Stingrays picked up her fourth medal of the meet, by taking bronze in 2:23.29.

Following the race Anderson and her coach, Richard Pointon, spoke about how much they were enjoying the event, with Pointon saying,

“Events are nothing like this in Hong Kong. We don’t get support. The atmosphere here is unbelievable and I’m looking to be back next year, with a bigger squad.”

Carnegie’s Craig McLean was also back to record breaking ways posting a new British Age Group Record (15 years) in the morning heats of the 50m freestyle. He then matched the time of 23.60 in the evening finals to take the title. Ross Leslie (South Lanarkshire) picked up silver in 24.64 with Jack Dandy (Chorley Marlins) securing bronze in 25.03.

But Carnegie swimmers didn’t have it all their own way. Ian Porteous (City of Glasgow) timed his 400m freestyle final to perfection overtaking Mark Szaranek, who had led from the start, in the last 50m.

The 23 year old who suggested he was coming to the end of his swimming career said,

“I’m a distance swimmer, so while I knew the others would go off hard, I knew I would have a lot left to give towards the end.”

To listen to the full interview with Ian, please listen here

The relays provided much to cheer about as always, with City of Aberdeen Swim Team storming to victory in the 4x200m freestyle. Harry Dalgamo, Louis Houette, Finlay Deans and Craig Smith powered their way and won with ease in a time of 8:34.33, to the delight of the local support.  Warrender (George Clough, Archie Goodburn, Benjo Duheric and Jamie Macdonald) won silver in 8:42.06 while William Balfour, Liam McDougall, David Pearson and Mark Hill of North Lanarkshire secured bronze in 8:42.38.

Browse all the pictures from Aberdeen at

Watch all sessions online at www.scottishswimming.com/swimtv

The event can also be followed on social media by using #SNAGS14 as hashtag, as well as on Scottish Swimming’s website, www.scottishswimming.com  A new section, Swim Buzz, will provide users up-to-date information about the Championships and other Scottish Swimming events, and can be visited at www.swimbuzz.co.uk