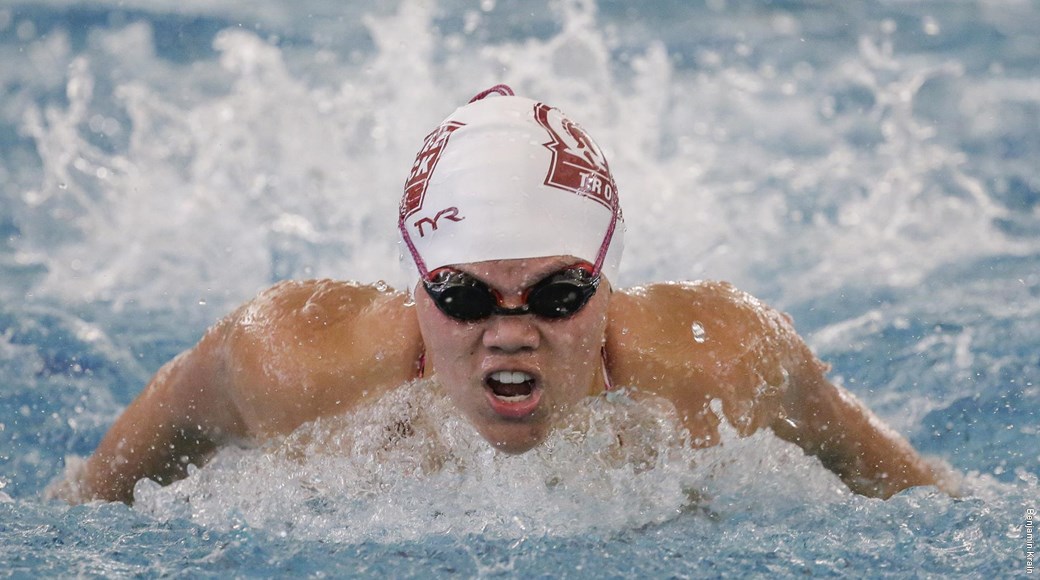 LITTLE ROCK – The Little Rock swimming and diving team hosted their first meet of the season today, winning the Little Rock ‘Swim Pink’ Invitational with a final score of 861, nearly 200 points over second place. The results show the improvements of the Trojans over the past year, since last season the team finished third against the same teams. The invitational also was successful in raising money for the Susan G. Komen foundation, giving $150 to support the cause through raffles and donations. The total was more than double the amount raised last year.

“Today was a great demonstration of what this team is capable of,” said head coach Amy Burgess. “Every week they are getting better and believing in themselves and each other. All the good feelings of racing at home came out and we had a lot that stepped up to race and perform. We’re even more happy that we could do that while supporting a great cause.”

Relays
The final event of the invitational, the 200 yard freestyle relay, may have been the most exciting event of the meet, as the A squad of freshman Asmalia Redzuan, sophomore Carolyn Godwin, junior Regan Lawrence, and freshman Khadijah Brown teamed up to come from behind and take the crown with a time of 1:39.42, touching out Oklahoma Baptist by four tenths. Earlier, in the meet’s opening 200 medley relay, the B team of senior Jessie Baldwin, freshman Taylor Baldacci, freshman Ashleigh Green, and freshman Khadijah Brown ended up out-touching the Little Rock A team for third place overall. The B squad finished with a time of 1:52.07, while the A relay was right behind at 1:52.10.

Diving
The Trojans swept the 3-meter board, with junior Sierra Thain topping the divers with a final score of 238.95 while classmate Coy Jones took second with 220.72 points. Both improved about 10 points than their previous scores from this season. On the 1-meter board, Thain finished second with 238.87 points, an increase of over 25 points since the last competition, and Jones took third with a score of 219.15 points, improving by over four points.

Freestyle
Freshman Emma Bleasdell started Little Rock’s individual swimming events off with a bang, posting a season best time of 10:51.70 by over 13 seconds to win the 1000 by approximately nine seconds. In the other mid-distance race of the day, the 500, Redzuan was able to hold off the pack to finish first as well, touching the wall at a season-best 5:18.61. Redzuan was also an event winner in the 200 free, stopping the clock at 1:57.71, while classmate Green earned second with a time of 1:59.09, going under the two-minute barrier for the first time this season with a nearly three-second drop.

In the shortest event of the day, the 50 free, two Trojans broke 25 seconds for the first time this season. Lawrence touched third at 24.77 while Brown stormed into the wall to take fourth with a time of 24.97 and drop over a second from her previous mark. Brown later led Little Rock in the 100 free, grabbing second overall with another impressive swim of 54.43. In the same event, senior Charis Won earned a solid third place finish, clocking in at 55.21.

Backstroke
The Trojans swept the 100 back, with the top five finishers wearing Little Rock caps. Baldwin led the way with a dominant time of 1:01.36, while sophomore Lea Zengerling took second with a time of 1:02.24 despite being in the first of two heats. Right behind to tie for third place was junior Regan Lawrence and freshman Fernanda Gamez at 1:02.28, while Won took fifth just hundredths away in 1:02.32.

There was a similar story in the 200 back: freshman Fer Moussier took the event with a season-best 2:08.96, and the next two spots were Trojans as well. Baldwin, like Moussier, dropped a second and a half to post a time of 2:12.65 for second, while Bleasdell took off over four seconds for a new collegiate career best of 2:15.71.

Breaststroke
Little Rock took both the second and third place spots in the 100 breast, with Godwin snatching silver in 1:09.82, while Baldacci dropped two seconds to take bronze with a time of 1:10.43. Godwin repeated in the longer breaststroke event, placing third for the Trojans in 2:33.36. Freshman Aly Grider also scored with a fourth-place finish and new season best of 2:35.88.

Butterfly
The 200 fly was won by none other than Moussier, commanding the pool by nearly five seconds to register a final time of 2:07.65 in her signature event. Classmate Brianna Ridings also continued to show major improvement in the tough event, shaving off four seconds to post a time of 2:15.92. The shorter butterfly event, the 100, saw a 2-3 finish by the Trojans, with Green clocking in at 1:00.43 followed by sophomore Katelyn White with a massive two-and-a-half second drop to record a 1:01.19.

200 Individual Medley
The IM race of the day was the shorter of the two, and Green led Little Rock with a new season best, stopping the clock at 2:15.21. Won finished third at 2:18.07 while freshman Anna Grom took fourth right after her senior in 2:18.37.

LITTLE ROCK, Ark. — The Henderson State Red Wave men edged out GAC foe Oklahoma Baptist for the top spot at the Little Rock Invitational on Saturday. HSU’s 839 points topped a four-team field made up of Oklahoma Baptist, University of the Ozarks and Williams Baptist University.

The Red Wave women swam valiantly and took third with 618 points in a five-team field made up of winners Arkansas-Little Rock, Oklahoma Baptist, University of the Ozarks and Williams Baptist University.

Triston Little gave the Red Wave their first win of the day in the 1000-yard freestyle with a time of 9:44.25. In the eighth event, HSU’s freshman Till Steyer topped the podium in the 100-yard backstroke after finishing in 52.97. Steyer also took first in the 200-yard backstroke with a dominant performance when he finished more than eight seconds ahead of the second place swimmer in a time of 1:53.12.

Henderson State rookie Tim Holt also helped the Red Wave sweep the 50-yard freestyle when edged out the competition in a time of 21.46.

Elam Fulton‘s 50-yard freestyle in 24.54 gave the Red Wave women their first win of the day. Fulton’s fantastic day continued when she took first in the 100-yard freestyle, finishing with a time of 53.98. Freshman Isabelle Andrews also sustained her hot start at HSU with a first place finish in the 100-yard butterfly (1:00.06).

The Red Wave swim next against Ouachita Baptist in the home opener on Oct. 25 at 6 p.m.

LITTLE ROCK, Ark. – Oklahoma Baptist traveled to the Natural State on Saturday morning and came back with a pair of second-place finishes at the Arkansas-Little Rock Invitational.

The women’s team racked up 677 points, only falling to the hosts from UALR. Oklahoma Baptist’s men’s team scored 743 points. Both teams combined for 17 event titles.

Both teams took home first in the first two events of the day, the 200m Medley Relay. The women’s team of Julie Day, Juliana Cifuentes, Jamie Edwards, and Laura Cifuentes clocked in with a time of 1:49.47, while the men’s team of Daniel Santos, Thomas Peterson, Tristan Villa, and Alex Leff touched in 1:35.20. Later on, the men’s 200m free relay team of Leff, Daniel Brown, Colton Wyatt and Santos took first in a time of 1:26.03.

Juliana Cifuentes claimed a first-place finish in the 100m breast after completing the race in 1:06.05. On the men’s side of the same event, Peterson also finished in first after touching in 59.92. Filip Duric finished third with a time of 1:02.31.

In the 200m fly, Villa claimed first place in a time of 1:54.72. Juliana Cifuentes took home an additional two event titles in the 200m breast and 200m individual medley.

Oklahoma Baptist returns to action on Friday, Nov. 1 when they return to Arkansas for the Hendrix Relays in Conway.