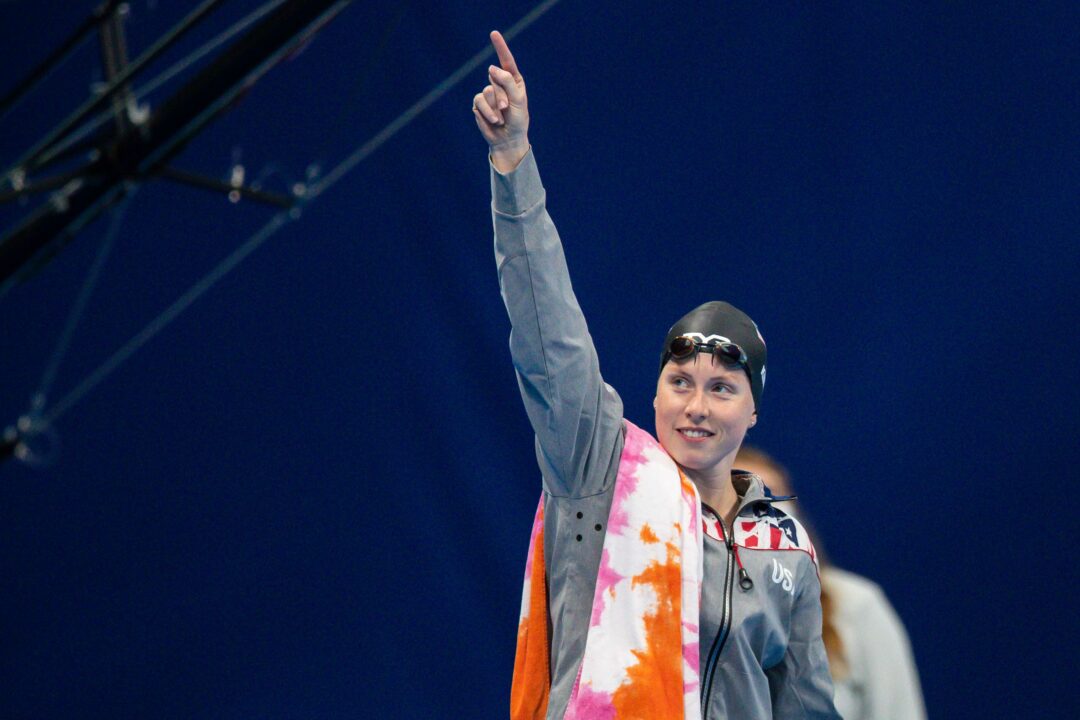 The new facility in Evansville features the "Lilly King Competition Pool" with a large mural of the two-time Olympic gold medalist on the wall. Archive photo via Jack Spitser/Spitser Photography

King was the guest of honor at the grand opening, with the main competition pool being named after her and a large mural featuring King placed on the poolside wall.

Officials are calling the pool the future of water sports in Evansville and the surrounding area.

After a series of ribbon-cutting events to open the facility, nine local age group swimmers took to the blocks with King. You can watch some video highlights (and the entire ceremony stream if you wish) courtesy of 14 News here.

”This facility is going to change this community forever,” King told 14 News. “It’s bringing aquatics to a much broader audience, and not just competitive. While the competitive swimming side of it is obviously fantastic, it’s so much more than that. I think it’s going to bring a real impact.

“Growing up I never thought we’d be here, so to see it finally be done and be complete and have kids swimming in the pool is really, really cool.”

Officials also announced that the 2026 NCAA Division II Swimming & Diving Championships would be held at the facility.

The now-24-year-old went on to compete collegiately with Indiana University, winning eight individual NCAA titles for the Hoosiers while winning two Olympic gold medals at the 2016 Games in Rio before adding three more medals this past summer in Tokyo.

Dear Ms. King and Supporters,
If by chance you, or any friends, supporters, or family read this earlier post of mine, and then see the post downvote count, I just want you all to know that, probably, EVERYONE appreciates Lilly King. The “downvotes” are meant for myself, due to a past stance that I took on a swimming/politics issue, and not for Lilly King’s deserved naming honor. I’d bet dollars to doughnuts that every downvoter to that comment would have upvoted it, had I not been the author.
I just want you all to know that, because otherwise you could be confused as to why anyone would vote negative.
Best,
Swim Fast..!!
Old Retired Guy

Jeez, get over yourself. People do not remember let alone care about your comments from another other post.

If we were to poll which US Olympians got the most grief from commenters, I think King would be pretty close to the top. (Basically her and MA are 1 and 2, can’t really think of anyone else close.)

The voting pattern on the two comments belies your assertion.

lol oh for sure man, real robust data set ya got there.

It was a simple enough Kanban, to be sure.

Ratio on both comments are the same now, so. Feeling good about my initial assertion, thanks for playing.

This young woman, Lilly King, and everyone that is involved in her development and accomplishments. deserves the highest recognitions and awards for what she and they have achieved.

I continue to both state and support that fact. You, however, have only cast aspersions on both her and myself in this thread. Think that through, won’t you? Maybe don’t do it in the future, when it’s obvious that you’re both stalking me AND trashing another person’s well-deserved compliments/achievements-acknowledgement thread.

Oh no, I have cast no aspersions regarding Lily King’s accomplishments or how well-deserved this pool-naming accolade is, I’m just saying OTHER commenters get more huffy about her than almost any US Olympian outside of MA. (Murphy got some heat during the Olympics after his Russian doping comments, but I think that was more from non-US commenters.) Hence, the voting pattern on your initial post had more to do with that than:

“I’d bet dollars to doughnuts that every downvoter to that comment would have upvoted it, had I not been the author.”

whatever you were doing with this self-important and bogus assertion.

So let me get this straight. You actually think that Russians are outvoting Americans, on this English-speaking website, regarding this story? You are, once again, incorrect at a level that is astonishing.

You are the only person on this thread who’s acting self-importantly and asserting bogusly. I’ll make this simple for you: I. See. You.

I am up voting you because you are old, senile, stanky and funny looking. I also think LK is deserving of having a pool and 3 toilettes named after her.

No one has any clue wtf you’re talking about, least of all LK. “The hate me Lilly! They love you!” Lol. Not mutually exclusive btw.

Again, the voting pattern on the comment chain belies your assertion, as well. BTW, if you had remembered to write “They” instead of “The”, you would have had a fine joke there. Humor always has a place in these times.

Never heard of you and I’m here every day. Yohzik you are not. All your downvotes are because of your utterly delusional, self-aggrandising attitude in this thread.

I am also here every day. I have been coming to this site for years. I have never heard of you. I am, indeed, not Yohzik. You, apparently, are unaware of the facts in this particular situation. Those who are attempting to delude, and those with the self-aggrandizing attitudes, reside elsewhere on this site and in this thread.

Can y’all try to get back on the rails, please?

I’m downvoting you because of this post. Not because of some post you did in the past. It just reads annoying to me.

Efimova Kiddie Pool next to it.

“…what the, BALCO II??? But Evansville isn’t even near the ocean!!”

I am still surprised at how dark indoor pools are. Even brand new ones do not seem to have ample lighting.

Really? not all? Go check out Chelsea Piers!

The Roosevelt Island Sportspark pool had great lighting from the south until a new Cornell Tech building was built right in front of it.

This Woman provides some of the trash talk this sport needs to make it more interesting. Good on her.

I wouldn’t say its as much trash talking as just disrespect, like how she went on national television and said she was trying to psych out a teenager in the ready room before finals at olympic trials.

Happy to see more pools being built and opening up for the community. Wish it could happen faster and in more areas!