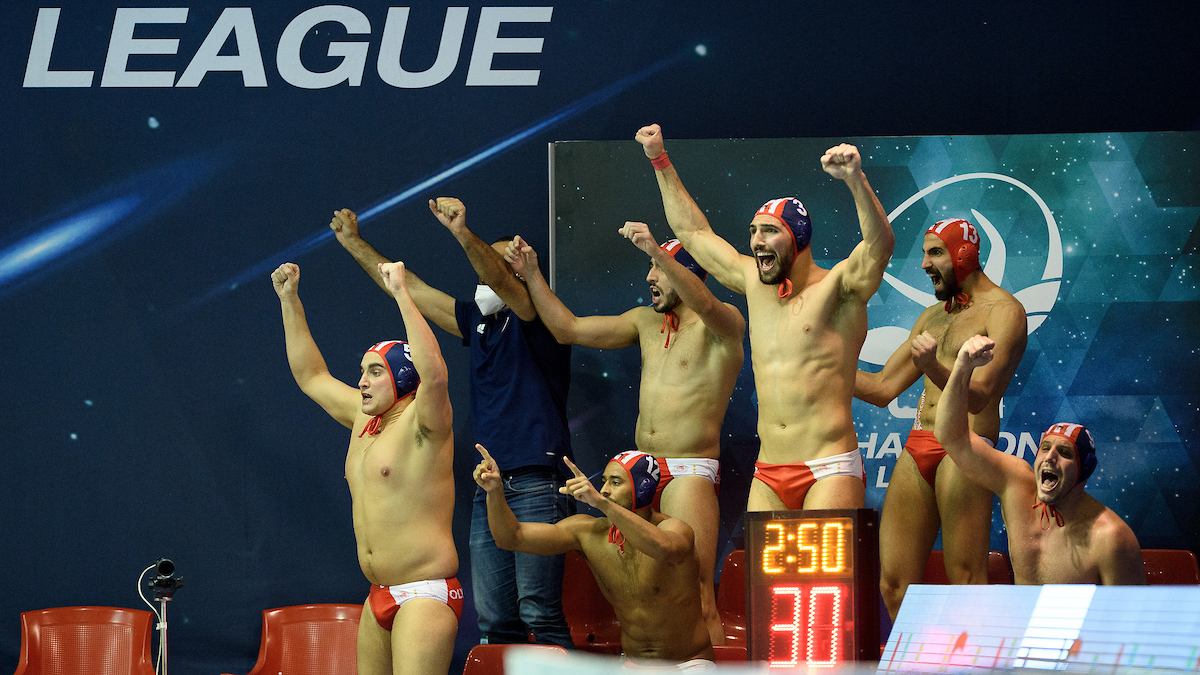 The title-holder Italian team is now the only side in the entire field with a perfect 3/3 record. Archive photo via © G.Scala/Deepbluemedia/Inside

Recco, Marseille and Jug all collected easy wins while OSC had to settle for a tie in Hannover after a thrilling encounter. The title-holder Italian team is now the only side in the entire field with a perfect 3/3 record.

The heavy favourites didn’t make any mistake – Recco beat Zvezda convincingly, though struggled at stages of the game while the Serbs did a fine job to prevent the title-holders from claiming a blow-away win.

Jug downed Spandau in Berlin with a brilliant second period, a 0-5 rush – all goals from action – killed the Germans’ dream of upsetting the Croats like Marseille had done in the previous round. The French also claimed a huge away-win, though they started dominating in the second half in Bucharest. It stood 5-6 at half-time, then Marseille staged a 1-8 run.

Hannover and OSC took care of having some excitements at least in this group. They produced a great match with a lot of twists and turns. The Germans led 4-1, then OSC scored four from 7-8m in a row and went 6-8 up by halftime. The third saw two late goals, one apiece, then the flood returned in the fourth. Hannover pulled one back four times, OSC reset the two-goal lead thrice but at 11-12 a missed Waspenalty cost them the win. The Germans could equalise, denied the Magyars’ last 6 on 5 to secure a point once more after a draw with Spandau on Day 2. OSC still remained undefeated and kept its second place.

Hannover took a flying start, scored three on its first four possessions to go 4-1 up. The Hungarians struggled both in offense and defence, their shots were easy prey for Moritz Schenkel who was only beaten from two man-ups.
Then in the second Ferenc Salamon sent the ball home from 7m and that marked a “new era” in the pool. All of a sudden, the Magyars shots became well-timed and precisely placed, indeed they scored three more, all from the perimeter and in the meantime killed three man-downs to go 4-6 up. They had a 0-5 rush and silenced the hosts for 8:46 minutes. Marko Macan broke the ice for Hannover but Vince Vigvari buried a dying man-up. With 49 seconds remaining, there was time for two more extraman-hits, one apiece, so OSC led 6-8 in the middle break.

After the action-packed first half, the third didn’t see any goals for long minutes before Jorn Winkelhorst put away an extra with 2:24 remaining from this period but a brilliant one-timer from Gergely Burian set back the OSC’s two-goal lead before the last break. In this period Hannover had five man-ups but could score only once – that changed for the fourth when they managed to bury three out of four. Petar Muslim set the tone right from the first possession for 8-9 and that kicked off the final phase of Hannover’s chasing game. For a while, OSC always had the answer as they also converted their extras (3/3), Krisztian Manhercz netted two, Vigvari was also on target so it stood 10-12 with 4:09 from time.
Darko Brguljan’s blast from his preferred 6m shot halved the distance once more when came a crucial moment: OSC earned a penalty but Manhercz hit the cross bar and even though Hannover missed its next man-up, the following went in. Thus it stood 12-12 instead of 11-13 as Ivan Nagaev sold his ‘zeroangle’ left-handed shot once more with 1:29 to go. The Hungarians had a last chance, a 6 on 5, 34 seconds before the end, but Vigvari was denied by Schenkel. Thus Hannover played another draw after sharing the points with Spandau on Day 2 while OSC remained undefeated. By the way, the match was a sharp contrast in team-building approaches: while Hannover relied heavily on its Eastern legion (11 out of their 12 goals were netted by their quality foreign players), OSC has been applying a policy to line up only with Hungarian players for the second year and it seems this can also be a road leading to higher circles.

The Italians found themselves in a middle of a fight as they could never turn the game to a lopsided contest what they had usually done while playing at home. All credits go to the Serbs who could stay close to the title-holders for a while with a disciplined and sometimes effective game. In the opening period, for example, Zvezda was 3/3 in man-ups while the Recco players wasted a handful of chances – though Francesco di Fulvio’s action goal at least gave them a 4-3 lead 18 seconds before the first break. For a while, the visitors were able keep up, thanks to a great goal from centre-forward Stefan Pjesivac who later earned a penalty as well. However, as time went by, the Serbs were unable to handle the blasts coming from the perimeter, especially di Fulvio’s and Gonazolo Echenique’s one-timers were brilliant and after 6-5 Recco scored three in a row to gain a commanding 9-5 lead by halftime. But even if they had their momentum, they could not capitalise on it in the third – Milos Vukicevic pulled one back early from an extra while the balls went all over the world from the hosts’ hands but not to the net. It took 4:29 minutes for Recco to score again, di Fulvio hit his fourth, again from action and 19 seconds later Aaron Younger added another one for 11-6. But that was all they could offer in this period as they lacked the edge in their finishes.
The trend didn’t change in the fourth, incoming young goalie Mihajlo Ivanovic posted a couple of tremendous saves – but Zvezda couldn’t decrease the gap as the match already consumed most of their power-reserves. After a time-out, the home side managed to offer something to its fans, though these goals were kind of accidental, Zeno Bertoli and Gergo Zalanki found the back of the net from the distance, both times beating the buzzer. Gavril Subotic showed some class as he lobbed his fifth after a fine drive, giving the Serbs something to smile about at the end.

The Romanians, returning to the top flight after two years, had to face a tough opening in the main round. Two away games for start, the first in Budapest against Euro Cup runner-up OSC, then in Recco against the title-holder – both ended up in bad beatings. Their first home match didn’t look much easier as Marseille (2019 Euro Cup winner, F8 participant last season) offered a great performance in Dubrovnik in the second round.However, playing at home, Steaua seemed much more determined, and they could put up a good fight as long as they could keep up the pace with the French. They lasted for two periods, so to say, deep into the second they held on for 4-4, then conceded two in 46 seconds – the first one was a magnificent wrist-shot by Ugo Crousillat, then Uros Cuckovic dunked from a man-up for 4-6. Francesco Iudean also pulled the ball in from close range to pull one back so it looked fine at halftime (5-6).But the third proved to be decisive. The French lifted their level in defence, they didn’t even allow a 6 on 5 while they were pretty effective from the centre-forward position, delivering action goals, exclusions and a penalty – they staged a 0-5 rush before the Romanians found the back of the net again, 43 seconds before the last break.It did not change much in the last period, the home players couldn’t penetrate Marseille’s defence at all, and even though the visitors’ concentration level dropped somewhat (missed man-ups, saved penalty), they could still add three more to win with ease. In fact, after a 5-6 first half, they won the second 1-8.

The Germans smelled blood after Marseille sank Jug in Dubrovnik 10 days ago and they were ready to cause another upset – but the Croats bounced back and blew them away as they needed only two periods to build a decisive five-goal lead.Despite missing two players from the usual line-up, Jug was in control right from the beginning. The visitors hit two action goals quickly, Spandau climbed back to 3-4 till the end of the first, only to fall apart in the following period. The Croats netted four action goals in a row, young Ivan Vukojevic hit two, the Greek centre-forward Konstantin Kakaris also delivered and even though Dmitri Kholod could pull one back 18 seconds before the middle break, Hrvoje Benic still had the time to reply, again from action, with 0:02 on the clock.Spandau could never recover from this blow and the Greek ‘special unit’ of Jug didn’t stop producing fine goals. Kakaris stopped at 5 and Stylianos Argyropoulos also came up with two in the second half to ensure a rather convincing win for the 2016 winners.