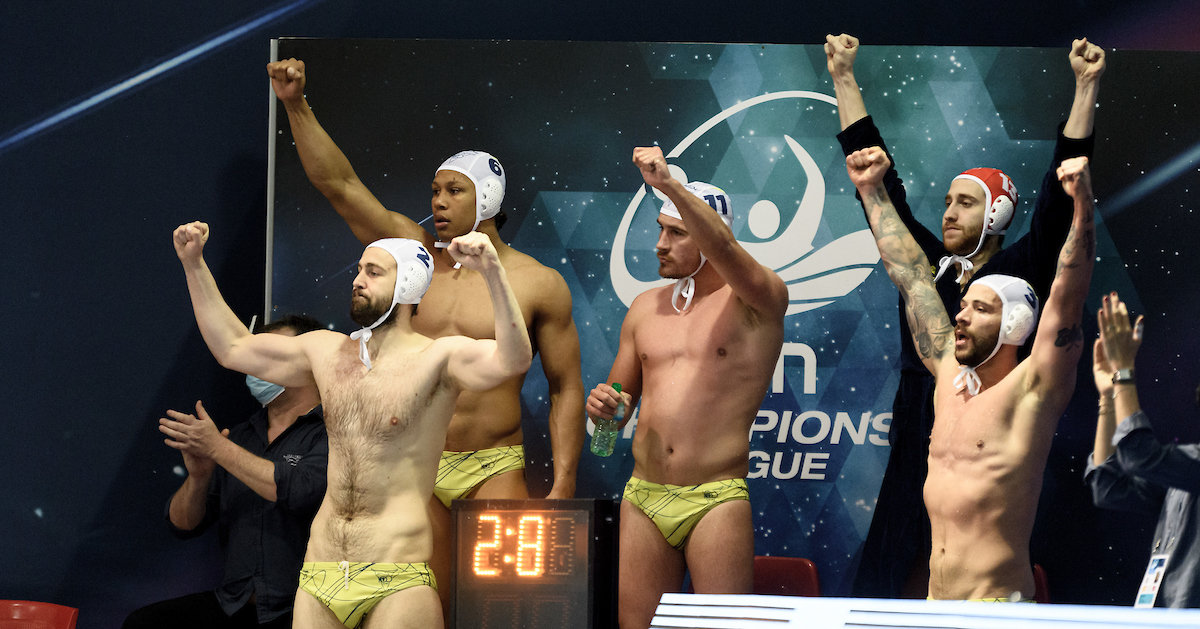 CN Marseille made history: by beating Spandau the French side reached the Final Eight for the first time, and could even finish third in Group A. Current photo via © G.Scala/Deepbluemedia/Inside

Serbian Olympic champion Filip Filipovic netted five goals, including the last two, which gave his side a three-goal advantage in a thrilling match.

Both ended up in third place in their respective groups but as a consolation they managed to go all they way to the final of LEN’s second-tier competition.

CN Marseille made history: by beating Spandau the French side reached the Final Eight for the first time, what’s more, it can even finish third in Group A. Jug secured its second place here, while Recco demolished Olympiacos with a 5-0 blast in the third period. In Budapest, Barceloneta won a thriller against Brescia – the Spaniards came back from 4-8 to win 10-9 and that put them in pole position. Dinamo Tbilisi set up a do-or-die match with Hannover for the last remaining qualifying berth as the Georgians managed to down Jadran. Title-holder Ferencvaros needed a 4-0 rush in the last period to beat Hannover after 9-9 as returning superstar Denes Varga offered another brilliant show, netting 6 goals in total.

CN Marseille made history by reaching the Final Eight with a spirited performance against Spandau – it’s a first both for the club and for French water polo. The decisive match was a nerve-wrecking battle with tremendous efforts in defence and tense shot-making in front – mirrored by the halftime score as Marseille led 3-2. Spandau’s problems started in the third: though they equalised right from their first possessions, from that point they were unable to get the ball behind Marseille’s Montenegrin goalie Dejan Lazovic. The French defence worked extremely well and two action goals in front put them 5-3 ahead, what’s more, after the Germans missed two man-ups, they could put away one just 2 seconds before the buzzer for 6-3. And Spandau’s misery went on in the fourth, Andrija Prlainovic buried a penalty and when Ante Vukicevic’s pinpoint shot hit the top left corner for 8-3 with 4:42 remaining, the outcome was inevitable. Time-outs didn’t help the Germans either, who could finally break the ice after 13:12 minutes, but that was way too late – their poor offense (5 goals from 28 shots – Marseille was 8/23) prevented them from making the finals again after 2018.

Before this clash, Jug managed to secure its second place in the group though the 2016 champions had to dig deep as Ortigia didn’t give that win for free.

Though the Italian side bowed out a day earlier, its players fought pretty hard and even though they were 6-9 down, they battled themselves back to 9-10 at the beginning of the fourth. Soon they had a man-up but missed it and Hrvoje Benic’s third goal in the afternoon secured Jug’s win – though the Croats netted only two goals in the second half after producing nine in the first.

Based on the past, an exciting match was to close the Tuesday session in Ostia – instead Recco blew Olympiacos away in the second half. The Greeks could keep up only for ten minutes or so, after 2-2 Recco netted three unanswered goals and kept the gap till halftime when they led 7-4. Then in the third it was Recco all the way, a 5-0 run decided the outcome, the last three came in a span of 2:01 minutes towards the end of the quarter. The last period lacked the tensions water polo fans had got used to in these two teams’ clashes in the last two F8s (final in 2018, semi-final in 2019), and now Olympiacos needs to beat Marseille in the last round otherwise they would finish fourth.

In Group B, the evening showdown between Barceloneta and Brescia was another important chapter in deciding the top spot. Brescia, finishing the previous tournament with four wins, offered a brilliant display of water polo at both ends of the pool in the first half. The Italians began the match with a 0-3 run and even though Barceloneta came back to 3-4, Brescia enjoyed another brilliant spell in the second to build a 3-7 lead with well-played man- ups. Another fine 6 on 5 early in the fourth put them 4-8 up and at that point no one really expected anything similar what actually happened soon.

Barceloneta changed gears and when they could hit two from action in a span of 52 seconds, it made them believing once again. Though Angelos Vlachopoulos netted a dying man-up for 6-9 but not even this harmed the Spaniards’ rise. Alvaro Granados converted a penalty, then they killed a man- down and soon Martin Famera brought them even closer with a 6m shot. One more 6 on 5 gone for Brescia, while Blai Mallarach put one away at the other end, 37 seconds before the last break – and it was even at 9-9.

The Italians’ offensive struggle continued in the final quarter – they wasted one more man-up and from the ensuing counter Barceloneta earned another penalty and Granados sent the ball home again. They were in the lead for the very first time in the match, with 3:49 to go – that goal turned out to be the game-winner as Dani Lopez denied Maro Jokovic in another 6 on 5, and the nets were never touched again in the remaining time. Indeed, Brescia was shut out in the last 12:04 minutes, but it’s even more telling that they could score a single goal in the last 14:26 minutes; that time they were still 4-8 ahead…

This outcome gives Barceloneta the chance to finish atop – they would only need a point against Ferencvaros on Wednesday. In case Ferencvaros wins, it’s going to be a three-way tie among the top three sides and the goal- difference from the games played against each other might favour Brescia for the top spot.

As of the fourth qualifying spot, Dinamo’s experienced Serbian and Montenegrin players helped the Georgian champions to beat the youngsters of Jadran Herceg Novi for the second time in Budapest. For a while it was an even game, Jadran had the better start but missed a couple of fine chances, including a penalty but it was still 4-4 in the middle of the second period. The Montenegrins’ problems began after this point: after conceding an action goal, they missed a 6 on 4 and 58 seconds before the break a centre-goal from Andria Bitadze gave Dinamo a 4-6 lead.

Things turned from bad to worse in the third, soon the Georgians boosted their lead to 9-4 – had a 5-0 rush – while Jadran kept on missing its 6 on 5s. The Montenegrins could score at last after a silence of 11:18 minutes, but despite they could find the back of the net twice in the last 45 seconds in the third, it was too late and too few. Though Dinamo’s defence loosened up a bit in the fourth, their win was never in danger – and that set them up for an ‘all- in’ match against Hannover. The winner will go to Belgrade, a tie would favour the Germans.

Despite playing with the complete roster for the first time in the season, title- holder Ferencvaros offered a bit of sleepy performance. Hannover took the lead three times in the first period before the hosts could find the way to make order in defence and go 4-3 up 12 seconds before the first break. In the second they added two while keeping Hannover at bay for 9:49 minutes and for a while they seemed to have the control while expanding the gap to three goals. However, another drop in the level of the Hungarians’ concentration let the Germans back to the game and some lazy defending in the last seconds ended in another goal from Hannover so it stood 9-8 before the last break.

Soon it was 9-9 after Ivan Nagaev converted a man-up so an upset was in the air – but before it could really take shape, two of the Magyars’ deadliest weapons killed Hannover’s momentum. Two goals apiece from Denes Varga and Marton Vamos quickly settled the match while the Germans were unable to score any more in the last 6:22 minutes. Varga could have netted even more as he missed some fine chances, still, he showed his unique skills by netting 6 goals – as if he hadn’t missed one and half months due to Covid-19.