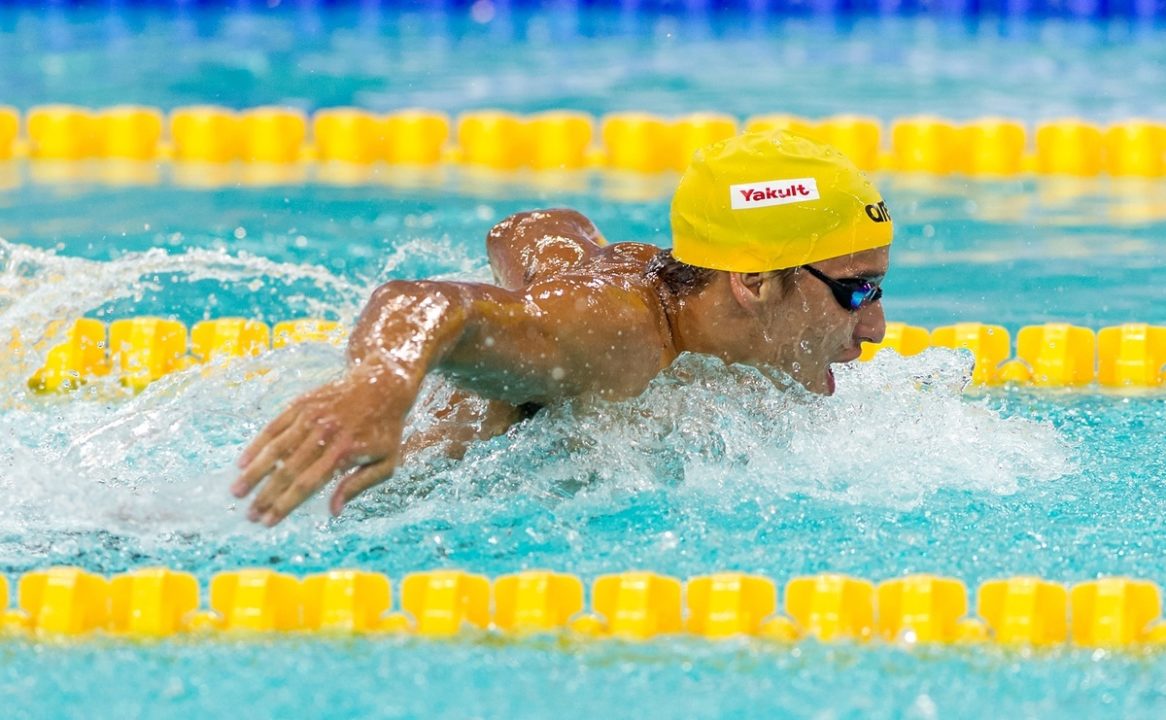 The FINA World Cup Series continued today in Dubai with Chad le Clos and Katinka Hosszu looking to add to their lead in the point standings in a quest to become the 2013 World Cup Champions.

Coming into today the point standings were as follows:

Mireia Belmonte of Spain picked up the first win of the evening taking the 800 freestyle in a time of 8:14.12. Belmonte the current world record holder in the event, posting a 7:59.34 at the World Cup in Berlin negative splitting race, swimming the first 400 in a time of 3:59.80 followed by a second half of 3:59.54. In her first race in Dubai she swam her race in the same manner, but much

Fellow Spaniard Melani Costa finished second in a time of 8:16.55 followed by Sarah Kohler of Germany who recorded a time of 8:18.90.

In her first race of the evening Hungarian Katinka Hosszu finished fifth in a time of 8:26.08.

Australian Travis Mahoney finished third touching in a time of 4:11.07.

Russian Vlad Morozov continued his domination of the 100 freestyle at the World Cup, already having won the event in Eindhoven, Berlina and Moscow, taking the event in Dubai in a time of 45.84. Morozov once again had an led the way from start to finish turning in a time of 21.84, matching his first 50 split from Moscow, in the end he was not able to match his winning time 45.68. from the meet in his home country.

American Anthony Ervin who competed in his first World Cup event of the year finished second posting a time of 46.88 while Australian Kenneth To finished third in a time of 47.01.

After finishing outside the medals in the 800 freestyle Katinka Hosszu returned to the pool battling Frederike Heemskerk of the Netherlands and Melani Costa in the 200 freestyle. Heemskerk turned at the half way point in a time of 55.38 leading Hosszu who hit the 100 wall in a time of 55.66. Heemskerk continue lead until the final 50 meters which is when Hosszu over took the Dutch swimmer winning the event in a time of 1:53.21.

South African Roland Schoeman continued his winning ways in the 50 breaststroke taking the event in a time of 25.96. Although the race in Dubai was closer than the one in Moscow, where Schoeman bettered the next competitor by 1.26 seconds, it was still a dominating performance where he beat Hendrik Feldwehr of Germany by just under a second.

Feldwehr finished second in a time of 26.95 followed by Shinri Shioura of Japan who posted a time of 27.83.

The absence of world record holder Ruta Meilutyte did not make the 100 breaststroke any less compelling. Meilutyte set a new world record of 1:02.36 in Moscow and in Dubai Jamaican Alia Atkinson gave the new standard a run for its’ money winning

the event in a time of 1:02.91. This was an incredible race for Atkinson who improved her time of 1:04.64 by almost two seconds and improved on her life time best of 1:03.41, which she posted in Eindhoven by half a second.

50 breaststroke world champion Yulia Efimova of Russia finished followed Atkinson finishing over a second behind posting a 1:04.00 while Amit Ivry of Israel finished third in a time of 1:06.70.

After taking a long break at the conclusion of the World Cup in Berlin Jeanette Ottesen Gray returned to competition tonight in Dubai and has not missed a beat. Ottensen Gray won the event in a time of 56.47.

The Danish swimmer took the first 50 meters out in a time of 26.31, over a second ahead of Katinka Hosszu who turned in a time of 27.34. Hosszu made a late charge in the final second half of the race, but did not have enough to catch Ottesen Gray, finishing second in a time of 56.87, collecting her second medal of the evening.

Li Tao of Singapore finished third in a time of 57.23.

American Tom Shields took the men’s 100 backstroke in a life time best time of 50.15, a second and a half faster than his previous best of 51.61, which he recorded in 2012. Shields beat Australian Robert Hurley who had won the event in both Berlin and Moscow.

Katinka Hosszu made it close, but got back on the medal podium for the third time this evening tying Daryna Zevina of the Ukraine with a time of 27.13.

South African Chad le Clos, who is currently the leader in the World Cup standings, won his first race of the evening in his signature race. le Clos took the 200 butterfly in a time of 1:49.07 just missing his own world record of 1:49.04, which he set in Eindhoven.

le Clos swam the race aggressively turning at the half way point 35 one-hundredths of a second ahead of his world record pace, but was not able to match the second 100 meters that he put up in August.

Pawel Korzeniowski of Poland challenged le Clos in the first 100 meters, but did not have enough to stay with him through the final half of the race finishing second in a time of 1:51.26.

Frederico Veloso de Castro of Brazil finished third in a time of 1:54.91.

Katinka Hosszu won her second event and her fourth medal of the evening taking the women’s 200 IM in a time of 2:06.58. Unlike her earlier races Hosszu did not have to make a second half comeback as she lead the race from start to finish.

Australian Emily Seebohm won her second silver medal of the evening finishing second in a time of 2:08.43 just ahead of Hungarian Evelyn Verraszto who finished third posting a time of 2:08.85.

Earlier in the evening Robert Hurley lost out to Tom Shields in the 100 backstroke, but he was not going to let that happen again. Hurley took the men’s 400 freestyle in a lifetime best time of 3:40.24.

South African Devon Brown finished second in a time of 3:41.84 followed by Danish swimmer Mads Glaesner who finished third recording a time of 3:42.35.

Only a day after it was announced that her coach, Jacco Verhaeren, was leaving for Australia, Ranomi Kromowidjojo of the Netherlands returned to the pool winning the women’s 50 freestyle in a time of 24.02. Kromowidjojo has won the event at

three of the four World Cup stops, setting a new world record of 23.24 in Eindhoven.

After finishing third in Eindhoven and Berlin then second in Moscow Olympic silver medalist Michael Jamieson of Great Britain finally ended up standing on the top of the podium winning the 200 breaststroke in Dubai in a time of 2:06.68.

The three men standing on the podium in Dubai were the same three men on the podium in Moscow for the 100 IM, this time in a slightly different order. Australian Kenneth To has been bettered by Vlad Morozov for much of the World Cup series, including tonight’s 100 freestyle, but that was not the case in the 100 IM as To took the event in a time of 51.64.

After sweeping the backstroke events in Moscow Daryna Zevina of the Ukraine show her displeasure of finishing third in the 50 backstroke earlier in the evening by destroying her competition in the 200 backstroke taking the event in a time of 2:01.66 over three seconds ahead of Australian Emily Seebohm who finished second in a time of 2:05.04.

Just as he did in Moscow Roland Schoeman kept his fellow countryman Chad le Clos from finishing in the top spot in the 50 butterfly, but this time by the narrowest of margins. Schoeman took the event in a time of 22.27 one one-hundredths of a second ahead of le Clos who finished second in a time of 22.28.

American Tom Shields collected his second medal of the evening finishing third in a time of 23.02.

Now that the world records for the mixed relays have been set a reasonable it will be interesting to see how quickly they are surpassed, something that did not happen on the first night in Dubai. The Australian team made up of Robert Hurley (23.54), Kenneth To (26.86), Belinda Hocking (25.51) and Emily Seebohm (24.40) took the event in a time of 1:42.31 missing the world record of 1:41.70 set by the Russians in Moscow.

Very bad first races for Camille Muffat and Coralie Balmy in 1.56 and 1.58! 😡
The start of the new season looks very hard for them.

Wow, great time for Alia Atkinson, new PB. She is the only one close to Ruta at the moment especially in SC, shame she didn’t have such a good season in LC.

And go Jeanette 🙂 It would be good to see her break her shiny suit record of 55.86 in the 100 fly this season, she has been in good form in long course so perhaps this is the time for her to do it.

No problem for Jeanette!
She will easily swim under 55.86 in Herning.
56.47 for the first race of the season is very promising.
I see her around 55.50.
The world record is French and looks unbeatable for a long moment. Diane Bui Duyet with her huge underwaters and her magical suit has swum 55.09 in 2009!

Instead, a bad start for Ilaria Bianchi unfortunately, hope she’s gonna find back her swim and fierceness on her way to Herning, where should be in the medal hunt. Don’t wanna fear that her 2012 was just a very lucky year…

Encouraging to see Atkinson continue to inch her way toward top; she has been on the scene for about a decade now and slowly improves each year, plus with a couple of bigger breakthrough jumps, first at NCAAs a few years ago, and then again now. She also beat Hozzu in the 100 IM last night. Will be interesting to see if she can figure out how to tweak her stroke hang with Efimova and Meilutyte in LCM; I think she has been only 1:06 so far. Does anyone know, where is she training now? Still with the Aggies?

I was surprised to see Tom Shields in the 100 back rather than in the 200 fly but it has been a really good choice.
He has won the 100 back in 50.15 ahead of Robert Hurley!
Surprising win for me but I don’t forget he has been NCAA champion in the 100 back in 2011 and 2012.
He’s in great shape and looks ready for a monster performance in his primary event, the 100 fly tomorrow or in the next world cups.