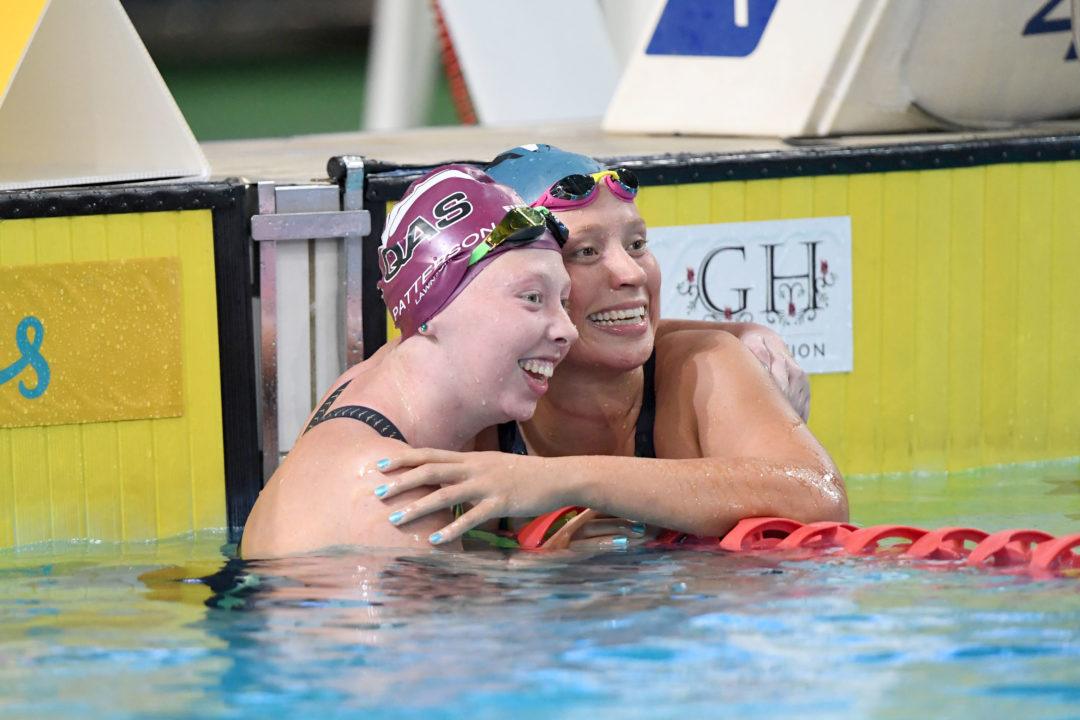 Belgravia’s Patterson posted a time of 4:39.55 (840 points) – only a second off her gold medal world champs time in 2019. Archive photo via Delly Carr / Swimming Australia Ltd

Speaking after the race, a delighted Patterson – who was excited to be back racing – said she was pleased with the time she posted.

“It’s the fastest I’ve been in a little while, so it’s a good position to be in considering the past year we’ve all had, and it can only go up from here leading into trials,” Patterson said.

“Seeing where I was in 2019 and to only be a second off that is really promising, and not being fully tapered or rested, putting in the hard yards while and where we can, especially last week there was a lockdown and having to swim in the ocean and still being able to put that together is really exciting.

“I know I’m going to put everything I have into these next couple of months leading into trials and the Paralympic Games.”

Even through the teeming rain Crothers was clearly beaming as he let the victory wash over him post-race.

“It feels really awesome, the conditions here aren’t amazing, there’s a lot of rain and the wind is going in the opposite direction but I’m not really about making excuses,” Crothers said.

“To me it’s more like the odds are stacked against me and against everyone and I’m only swimming point two off my lifetime best – I’m just over the moon, I’m so happy.”

The action continues tomorrow at 9am (local time). You can catch every race live from the Gold Coast Swimming & Aquatic Centre on Amazon Prime Video or via SwimTV.

Click here for all results, including MC Age events.

Note: All para races were swum as multi-class races, meaning athletes from all classifications competed in the same event, with the para-swimmer the highest point score crowned the winner.

The Multi-Class Point Score (MCPS) has been developed to provide a simplified way for swimmers and coaches to measure and compare performances. The MCPS is based on the World Record (WR) times for each classification, but also takes into account weightings for non-Paralympic events that are not raced by other countries around the world.

The Aussies are good for some entertainment. Newly classified and he is only a couple tenths off world record in his first big para swim meet. So absurd and sad at the same time. That will take the attention off Lakeisha

An unwatchable, farcical s#%^ show – absurd and sad are understatements, thank goodness it’s only 2 days worth! A bunch of them are heading to Texas this week for the usual classification coin toss.

Funny it’s a priority to send Athletes to Texas for classification on the quiet, during Covid, when rumours indicate that next months Sydney Open will be a Para World Series stop with classification opportunities (might be totally wrong on that one). Must think they can slide through easier over there. The list of newbies smashing records they are rushing to get approved is crazy.

Just an assumption but if your smashing WRs before your even classified and never swum multiclass before it’s a little suspicious. Just more washed up open swimmers stealing medals flooding the sport at the moment.

Almost 40,000 at the recent Texas Rangers game in Arlington, they could experience a spike in cases just in time for the meet – if they still test in that state of course.

SAL refused to send their junior swimmers overseas due to the Covid 19 pandemic so why are they sending their disabled swimmers overseas to a US state with community transfer, where masks are no longer mandatory and sporting venues are almost at full capacity? And, are they cutting in line in front of stranded Aussies for their homeward bound flight and quarantine stint? As usual, there is nothing transparent about the Australian Para program and SAL’s senior management. Could they even secure insurance during a pandemic?… Read more »

Couldn’t agree more. Texas must be thrilled – Half of them were in a declared Covid hotspot a week ago themselves (though Aussie numbers are significantly lower than other parts of the world). Would love to know how much this trip is costing and who picked up the bill!

When Athletes who have been selected on previous teams won’t make the cut because of all these “new discoveries” you know something is fishy.

Tonight’s results are even more of a joke.