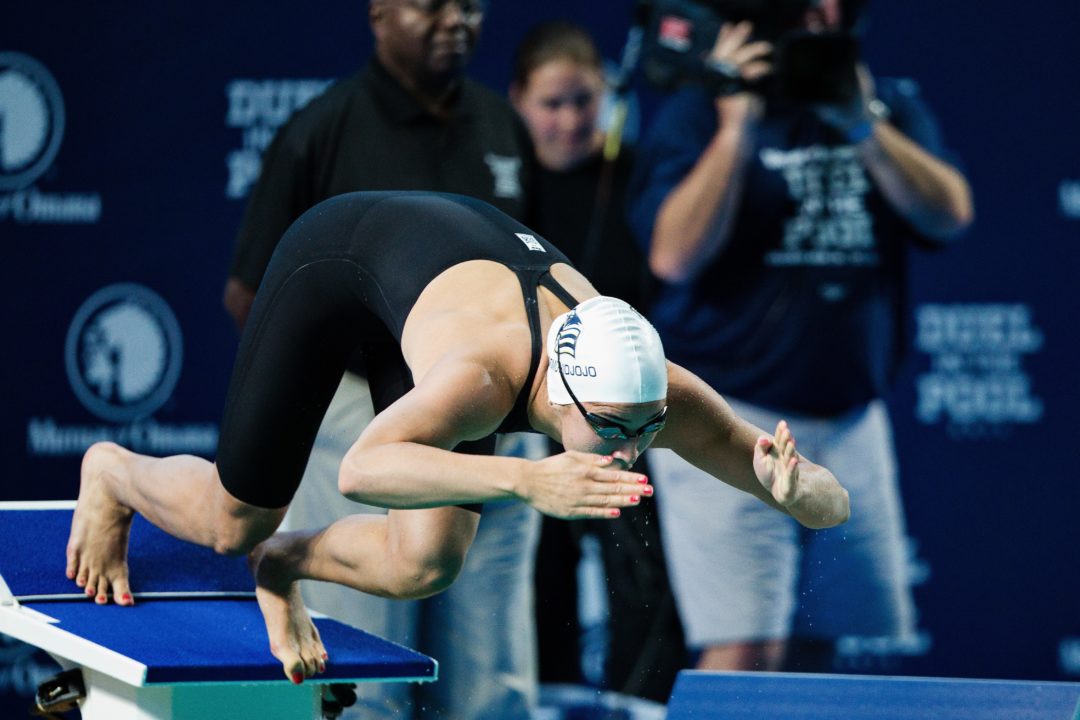 The Netherlands' Ranomi Kromowidjojo swam a textile-best in the women's 50 free on the final day of the 2012 Eindhoven Swim Cup (Photo Courtesy: ©Tim Binning/TheSwimPictures.com)

On the final day of the 2012 Eindhoven Swim Cup in the Netherlands, which is serving as that country’s final Olympic Trials leg, there was a lot of anticipation as Ranomi Kromowidjojo was gunning for a second textile-best swim.

As predicted, she wasn’t able to break the 24-second barrier, but she didn’t need that much of a drop to snap the old textile-standard, and she got just enough as she slid to a 24.10 – best in the world and best ever in textile. That upset a tie at 24.13 between Fran Halsall from earlier this year and Inge de Bruijn, a great dutch sprinter of another era, from 2000.  Stories coming out of Eindhoven are that she wasn’t “tapered” for this meet, but of course we’ve heard that story before and seen swimmers flop afterwards. Based on how good her times were this week, we’ll have to wait until London to see if she can back those claims up.

Kromowidjojo will be joined by Marleen Veldhuis, who took 2nd here to nail down her Olympic qualification. The 24.36 she swam is the fastest she’s been since the 2009 World Championships. At 32-years old, Veldhuis is still putting up amazing times (and blowing away marks she swam a decade ago at 22-years old, when most women’s sprinters are entering their primes).

Inge Dekker was 3rd in 24.64 followed by Hinkelien Schreuder in 25.29, which at best gives them status for a 200 free relay swim at the European Championships. Sweden’s Sarah Sjostrom, after swimming a personal-best on Saturday, scratched this final and headed home.

In the men’s 50 free final, all of the medals went to international swimmers. Brazil’s Bruno Fratus took the win in 21.87, which is the 4th-best swim in the world this year and moves him just .02 behind his countrymate Cesar Cielo this year. With the kickoff of the Brazilians’ big spring Olympic Trials meet in just 8 days, Fratus (if he can survive the long trip back home and another time adjustment) is looking very good.

Nick Driebergen likely had his relay spots taken away in the two sprint backstrokes, but with Bastiaan Lijesen not even attempting this 200, Driebergen had no problem dominating the race in 1:57.96. While that dominated this race by over three seconds, it missed the Olympic automatic qualifying time by just .03 seconds.

In the women’s version of that race, 18-year old Sharon van Rouwendaal took the win in a dreary 2:10.14; she’s one of a large group of young talent that are chasing Missy Franklin in this race. What could really make this final awesome in London is that because of a huge lack of parity in the race (the times drop off bigtime after the top), swimmers like van Rouwendaal don’t have to put any focus at all into making their counties’ shape-maintaining times, and thus can train right through meets like these. That will even further emphasize the disadvantage of a late American Trials.

In the men’s 100 breaststroke, Lennart Stekelenburger won in 1:01.04 (he was a touch faster at 1:00.97 in the semi-finals). As we mentioned yesterday, he’s the key to the Dutch medley relay; even tacking on a relay start, that time isn’t going to be enough to make them medal contenders. For that to happen, he’ll need to be splitting at least under a minute. Brazil’s Joao Gomes didn’t look as good as his teammate Fratus did earlier in the meet, but still was strong a week out with a 1:01.62. As of now, he sits as the second Brazilian qualifier in this 100 breast, but with the likes of Felipe Lima, Henrique Barbosa, and Tales Cerdeira chasing his 1:00.40 from December’s long course Nationals.

Moniek Nijhuis was the top-finishing Dutch swimmer in the women’s 100 breaststroker in 1:08.50, which stamps her ticket to London. She was 2nd overall in the race and sandwiched by a pair of Swedes in Jennie Johansson (1:08.29) and Joline Hostman (1:09.21). This will be one of the last opportunities for Swedish swimmers to qualify for the Olympic Team (after the Swedish Grand Prix next weekend) and Hostman has put herself in a tough position, at least in this 100. Expect American-trained Rebecca Ejdervik to make an appearance either at the upcoming Swedish Grand Prix or the Charlotte UltraSwim Grand Prix.

And wrapping up big news from earlier in the meet that is rolling around the Dutch swimming community, their 800 free relay missed by about six-tenths the aggregate time they needed to qualify for the Olympics.

Fratus 21.87 is his best untapered time ever. Let s see how he will swim in less than 10 days in Maria Lenk Trophy.