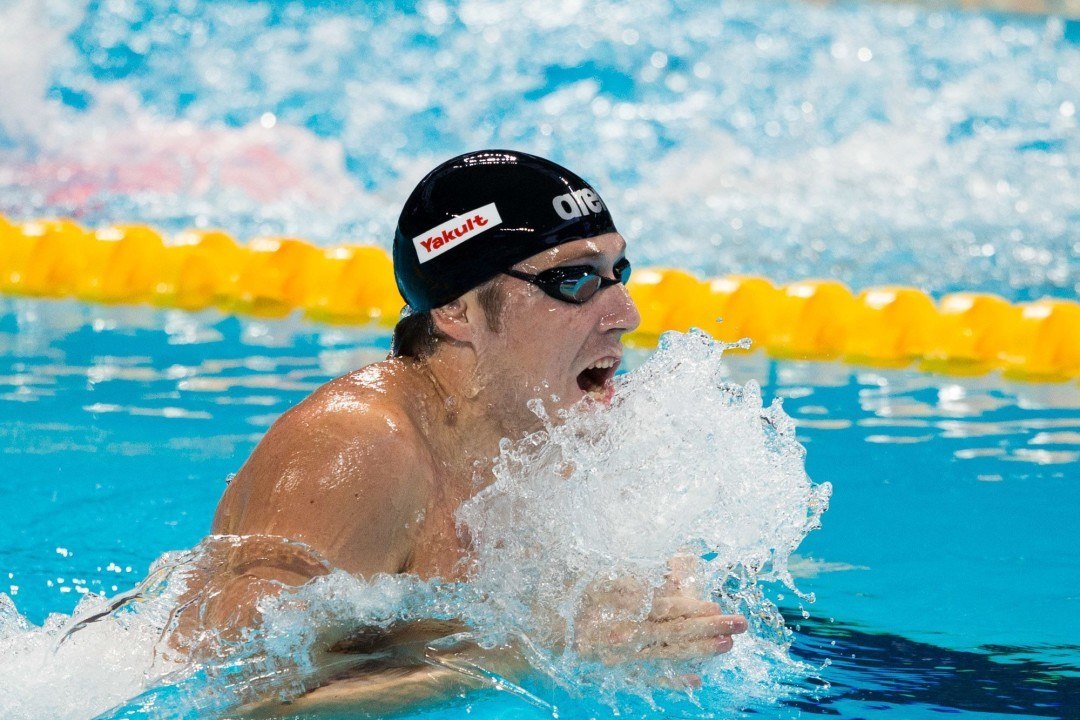 Marco Koch broke another Golden Tour record with his 1:00.66 win in the men's 100 breast on Sunday in Amiens, France. Archive photo via Tim Binning/TheSwimPictures.com

After two days of numerous Golden Tour record-breaking swims, the final day in Amiens was a little calmer. Only two records went by the wayside: men’s 100 breast and men’s 400 free. In the former, Germany’s Marco Koch came back from third at the 50 to touch out Felipe Lima (BRA) and Ross Murdoch (GBR), 1:00.66 to 1:00.90 to 1:01.55. With that swim Koch completed the 100-200 sweep, setting Golden Tour records with each win. Lima had rewritten the Golden Tour record books, himself, when he won the 50.

France’s Jordan Pothain was the other record-breaker. After a second-place finish in the 200 free, Pothain came back to win the 400 free in a Golden Tour best of 3:48.50, just 1.2 seconds off his seed time, and the fastest of the field by nearly 4 seconds. Countryman Damien Joly edged Sergii Frolov (UKR), 3:52.20 to 3:52.43, for second. Pothain is up against a 3:46.66 to qualify for selection to the French national team for Rio, and he will need to swim that in finals at French Trials at the end of March.

The third and final day of racing in Amiens began where the second left off: the 100 fly. This time it was the men in action, and France’s Jordan Coelho, seventh in the 50 and second in the 200, earned the top step of the podium with 53.37. Cameron Brodie (GBR) was runner-up in 54.46; Flavien Aubry (FRA) was third with 54.61. French record-holder Mehdy Metella skipped the 100 fly to concentrate on the 50 free at the end of the session.

The last race of the evening was the highly-competitive men’s 100 free. Florent Manaudou claimed the win in 48.51, holding off a fast-charging Jérémy Stravius, who finished second in 48.75. Third place went to Mehdy Metella in 49.42. The Frenchmen are shooting for a qualifying time of 48.13 at the end of March to make the Rio team.

Call me crazy if you want but if Agnel can swim 1.44 next summer, then I like our 4X200 free gold medal chances very much.
Pothain improves very well and can swim 1.46. Stravius has never looked as strong and could swim 1.44. Bourelly can swim 1.47.