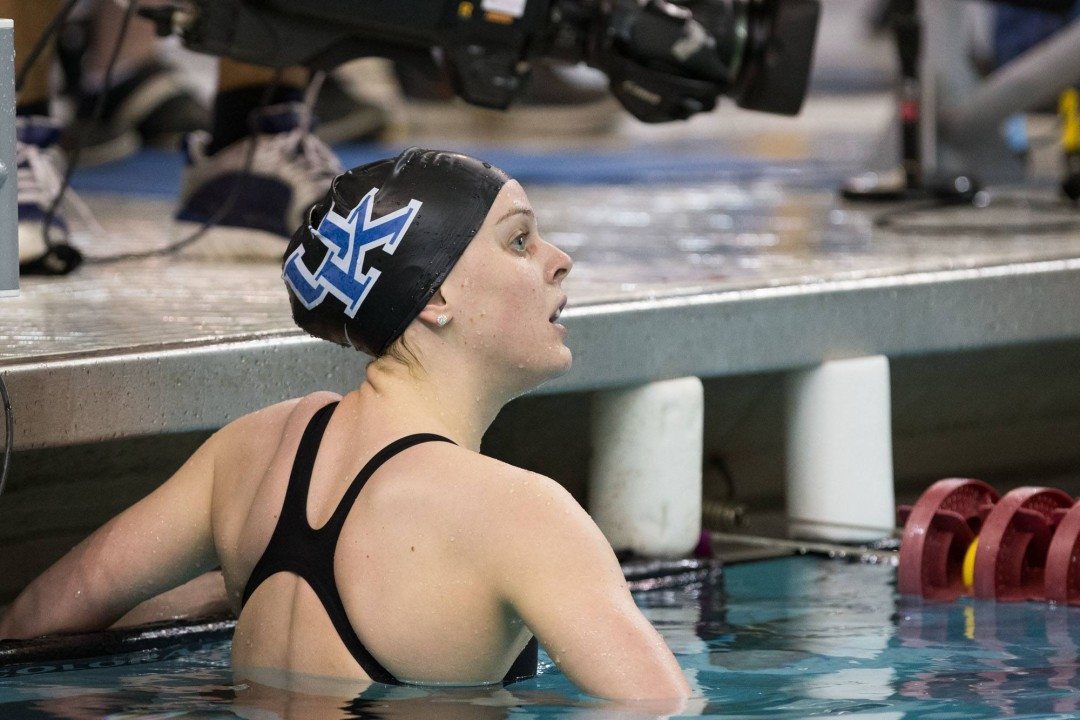 Going into his fourth year at the helm of the Kentucky swimming and diving program, head coach Lars Jorgensen continues to pit the Wildcats against some of the best competition in the nation.  He announced the 2016-17 schedule on Friday, which features three home meets in addition to the annual Blue-White Intrasquad to kick off the campaign.

Kentucky will hold its friendly benchmark scrimmage that splits the squad into a Blue and White team, which will be the first opportunity of the year for fans to see the fresh crop of Wildcats in a competition setting.  The scrimmage will be held in Lancaster Aquatic Center on Friday, Sept. 30 at 3 p.m. ET.

From there, the Wildcats enter their dual schedule.  Overall, the opponents that UK will face in dual meets feature a combined 82 returning athletes that scored at the 2016 NCAA Championships, collecting 107 First Team All-America honors along with 97 All-America honorable mention honors.  Included in those 82 athletes, four put on gold-medal performances at the national meet, while nine athletes claimed silver and 11 took home bronze.

Kentucky will have back-to-back Southeastern Conference opponents on consecutive days to start the regular season, first traveling to Auburn, Ala., for a meet with the Tigers at noon on Oct. 12 before heading East to take on South Carolina on Oct . 13 in Columbia, S.C., also slated for a noon start.  Auburn’s men finished 10th in the nation this past season, and will return seven athletes that combined for 15 first-team and nine honorable mention All-America accolades.  The women finished 33rd, and return just one scorer who ended her season as an honorable mention.  South Carolina returns five men and two women who contributed to the respective 17th and 29th-place finishes for the Gamecocks, including national runner-up in the 1650 free Akaram Mahmoud.

After the season-opening road trip, Kentucky will play host to a pair of staunch opponents that had both the men’s and women’s squads finish in the top 15 at the NCAA Championships.  The tri-meet with Indiana and Tennessee will begin at 11 a.m. on Oct. 18, and boasts a wealth of depth in its competitors.  Indiana’s men finished ninth in the nation and return 11 scoring athletes that collected nine first-team and 18 honorable mention All-America honors, while the women’s nine returners that posted 13 first-team and nine honorable mention efforts helped the team take seventh at NCAAs.  Of note on Indiana’s lineup is Lilly King, who broke the NCAA, American and US Open records in the 100 and 200 breaststroke in her rookie campaign as a Hoosier.  The Volunteers have six athletes returning that combined for nine first-team and seven honorable mention All-America accolades on the men’s side, leading Tennessee to a seventh-place finish.  Liam Stone led the team on the 1-meter springboard, claiming the national title.  The women’s team placed 13th and returns five athletes that claimed six first-team and six honorable mention All-America distinction.

The following weekend, UK will host its last home meet of the 2016 calendar year, bringing in SEC foe Missouri, along with Northwestern and Southern Illinois.  Both the men and women of Northwestern were represented by one diver apiece at the national meet, with Olivia Rosendahl scoring all 15 of the Wildcats’ points for the 32nd-place finish while the men did not score.  Southern Illinois was not represented at NCAAs.  The biggest competitor for the weekend will be Mizzou, which placed eighth on the men’s side and 11th on the women’s.  The men return eight athletes who posted 11 first-team and 14 honorable mention performances, including the national champion in the 100 breast, Fabian Schwingenschlogl. The Tiger women have seven returning athletes that combined for seven first-team and seven honorable mention accolades.

After the conclusion of the first portion of the dual schedule, Kentucky will take its annual mid-season taper and head to Columbus, Ohio, for the Ohio State Invitational on Nov. 18-20.  While the swimmers are in the Buckeye State, the diving squad will head to the campus of IUPUI for the annual House of Champions diving meet, also on Nov. 18-20.

A substantial training break follows the November meets, as Kentucky will not compete again until January.  The divers will ring in the New Year in Knoxville, Tenn., with the Tennessee Diving Invitational on Jan. 3-5, followed by the renewal of dual action with a tri-meet against Virginia Tech and Georgia Tech in Blacksburg, Va., on Jan. 6-7.  Both of VT’s squads finished in the top 25 at NCAAs, with the women placing 25th and the men taking 19th.  The women return three athletes that scored, all of whom earned honorable mention with an additional First Team All-America swim by Klaudia Nazielbo in the 200 fly.  The men return two scoring athletes, including three-time First Team All-American Brandon Fiala.  Georgia Tech’s women did not have any representatives in their home pool as hosts of the NCAA Championships, but the men finished 37th behind two All-America honorable mention performances from Bradley Homza.

Kentucky will hold its senior day on Jan. 21 with the annual Battle of the Bluegrass against the Louisville Cardinals.  The Cards will come to Lancaster for a 1 p.m. meet, preceded by honoring the UK swimmers and divers in their final year with the program.  The Louisville women finished eighth at the NCAA Championships, and despite losing four-time national champion and 100 fly American record holder Kelsi Worrell, return seven athletes that combined for 14 First Team All-America performances and two honorable mentions.  The Cardinals return three-quarters of both the runner-up 400 medley and third-place 200 medley relay lineup, both of which were anchored by rising sophomore Mallory Comerford, who also took silver in the 200 free.  The men placed 11th last year and return seven Cardinals who scored and picked up 14 first-team and nine honorable mention honors.  Louisville boasts strength in the relays, taking home All-America First Team in the 200 and 400 medley as well as the 800 free relay and garnered honorable mention in the 200 and 400 free relays.

The Wildcats will close the lid on the regular season with a short trip to Cincinnati on Jan. 27, slated for 5 p.m.  The Bearcats sent one representative to the NCAA Championships, with Jacqueline Keire returning after an All-America honorable mention swim in the 100 free.

On Feb. 11-12, a small group of swimmers will head to the Ohio State First Chance meet in Columbus, which is oftentimes used to determine the remaining members of the SEC Championships squad.  The Wildcats will take on the rest of the conference in Knoxville on Feb. 14-19, where Kentucky is looking to continue moving up the ranks of the toughest top-to-bottom conference in the nation.

After the SEC Championships, Wildcats on the bubble will have the opportunity to swim in the Last Chance Meet in Columbus.  As the name suggests, it is the last chance for swimmers to earn a coveted qualifying time to the national meet, with the women swimming on March 4 while the men will swim on March 11.  The divers will have the opportunity to punch their tickets to the NCAA Championships March 9-11 in Indianapolis.

The 2016-17 season will come to a close on the national stage, when Kentucky’s qualifiers will compete in the NCAA Championships.  IUPUI will play host to the national meet, with the women’s championship on March 15-18 while the men’s will be the following week, March 22-25.

The full schedule for the 2016-17 season is detailed below.

HOME MEETS ARE IN BOLD CAPS