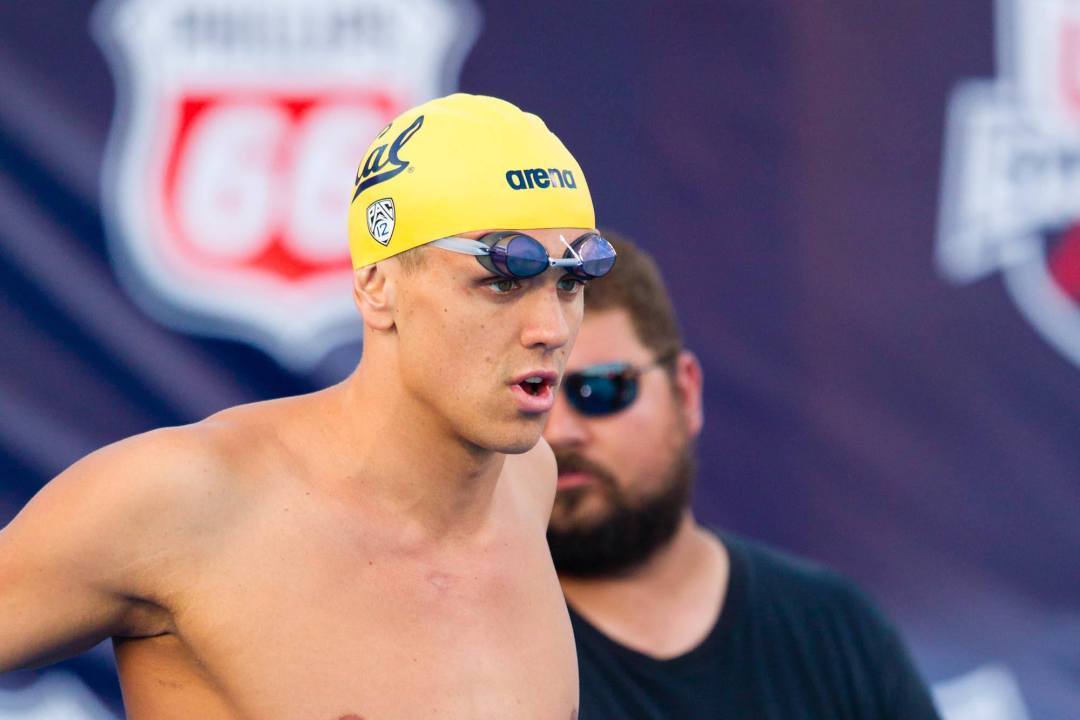 Day one of the Moscow World Cup kicked off today bringing both iron lady Katinka Hosszu and American Tom Shields five individual medals to improve on their overall point scores from the series thus far.

The meet kicked off with the women’s 800m freestyle where Mareia Belmonte of Spain and Yirong Bi of China took total control of the race to finish way ahead of the rest of the pack. Ultimately it was Belmonte touching first in 8:12.12 to Bi’s 8:12.91. Evelyn Verraszto of Hungary finished third way behind the two leaders in 8:41.81.

Thomas Fraser-Holmes started the meet for the men, taking home  a gold medal in the 400m IM. Fraser-Holmes’ time of 4:02.31 was fast enough to take down David Verraszto of Hungary who touched the wall in a swift 4:02.90 just behind Fraser-Holmes. The two separated themselves from all other competitor with Verraszto finishing almost five seconds ahead of third place finisher Gergely Gyurta.

Chad Le Clos showed no signs of slowing down his rein of terror on the world cup series with another win, this time in the 100m freestyle. Chad Le Clos finished well ahead of second place finisher Steffan Diebler with a time of 46.60 to Diebler’s 47.18. American Tom Shields was able to sneak in for the bronze with a 47.35 performance to round out the top three.

Katinka Hosszu who’s been the centerpiece of these circuits for years now came home with her first win of the evening, taking down a tough field in the 200m freestyle. Hosszu swam a 1:53.18, slower than she was at the end of August in Doha where she came close to the world record with a 1:51.41. Veronika Popova of Russia finished second behind Hosszu in 1:54.88. Evelyn Verraszto picked up her second bronze of the night with a 1:56.26.

Marco Koch of Germany faced off with breaststroke superstar Daniel Gyurta of Hungary for the first time of the evening, ultimately taking him down in the 50m breaststroke final. Koch touched in at 26.52 to just beat Gyurta who was a fraction of a second behind him in 26.56.

Following the men’s 50m breaststroke was the women’s 100m breaststroke where Rie Kaneto of Japan finished with a comfortable victory in 1:05.66. Daria Deeva was second over half-a-second behind in 1:06.30 whereas Maria Atashkina of Russia finished third just behind her in 1:06.51.

Inge Dekker was extremely fast in the final of the women’s 100m fly, touching the wall in 56.08. She was over two seconds ahead of second place finisher Anastasia Lyazeva who clocked in at 58.43 to take silver. Dekker came close to her personal best of 55.74 which she set in Istanbul back in 2009.

Tom Shields added his second medal of the night, taking silver in the 100m backstroke behind Germany’s Christian Diener. Diener finished the race in 50.31, ahead of Shields’ 51.04. Shields was able to hold-off Bobby Hurley of Australia who was a 51.17 to take bronze.

Daryna Zevina of Ukraine won the 50m backstroke in an extremely close race, touching the wall in 26.33 for gold. Mie Oe Nielsen of Denmark was second in 26.44 ahead of Hosszu who finished in 26.78 to pick up her second medal of the evening.

Le Clos clearly wasn’t done racing after his 100m freestyle win as he faced off with Tom Shields in the men’s 200m butterfly to take home the gold in 1:49.73. Shields finished second in 1:51.61 almost two full seconds behind Le Clos giving him his third medal of the meet thus far.

Hosszu added her second gold of the evening with a win in the 200m IM. She touched the wall in 2:05.81 to take down Belmonte who was able to finish second in 2:08.25. Evelyn Verraszto picked up yet another bronze medal, stopping the clock at 2:10.49 for gold.

Thomas Fraser-Holmes added to his gold medal tally with a victory in the 400m freestyle. His victory, which came at no surprise, was sealed when he touched the wall in 3:40.59 ahead of China’s Yongwei Li who earned himself a silver medal with a 3:42.90 performance.

Inge Dekker kept the streak of repeat champions alive, winning her second gold of the night, this time in the women’s 50m freestyle. The Dutch sprinter demonstrated her raw speed to the field with a huge win; finishing in 24.05 well ahead of second place finisher Julie Levisen of Denmark. Levisen was a 24.82. Incredibly, after medalling in two straight events Hosszu came back to touch third just ever so slightly behind Levisen in 24.83.

Daniel Gyurta got to have a rematch of sorts with Marco Koch who out-touched him to win gold in the 50m breaststroke. The two faced off in the 200m breaststroke final, where it was again extremely close but this time Gyurta was able to get the upper hand. Gyurta touched the wall in 2:01.88 to Koch’s 2:02.07.

Tom Shields grabbed his fourth medal of the meet, and with it, his first gold as he touched the wall in 53.53 to win the 100m IM. The race was his to win and he took advantage of that with a fast time and a gold medal.

In the last female event of the evening Katinka Hosszu came in hot to win the event over Zevina 2:02.05 to 2:02.87. That left Hosszu’s total medal talley at three golds and two bronze medals.

Great 50 fly unshaved by Le Clos. Also, he was under WR pace at the 100m for his 200 fly. I think he’s going to go for breaking all 3 WRs in Dubai this Winter

More Americans should do these meets.

They aren’t very well attended period…not just Americans, but most countries aren’t really backing them. It seems you have to be real good, real good short course, and not of the mindset that you can’t miss training.
It is also a hassle to get funding to pay for transportation etc to get there.

I agree that they should. Tom Shields is doing well. Michael Phelps would be better occupied here than in Baltimore. Shields and Le Clos will blow him away after he gets out of jail (not a prediction, just a reflection of what the majority on this sight seems to want)