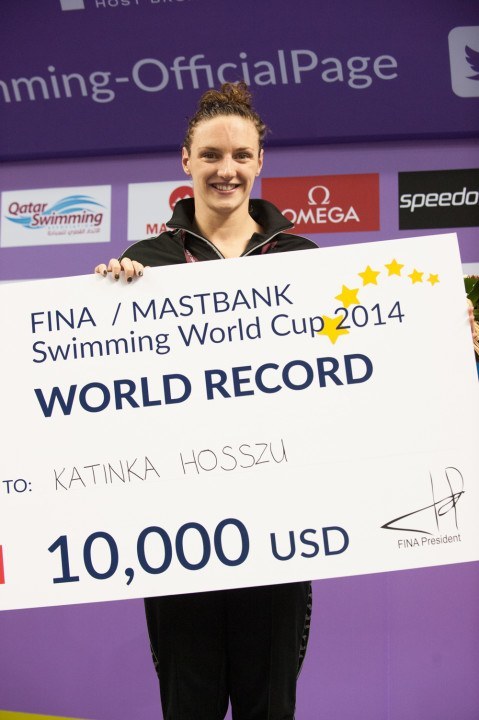 In the first two stops of the 2014 FINA World Cup Series, which took place in the same week in Doha, Qatar and Dubai, UAE, Hungarian star Katinka Hosszu earned $125,000 in prize money, thanks in part to 5 World Record breaking swims, each of which came with a $10,000 bonus.

And for that one week, she made a wage the equivalent of her counterparts in other sports.

Different professional sports leagues structure their pay in different ways. In American Football, the NFL, for example, players typically get their salary spread out over the 17-week season. In the NBA, players used to be paid across 6 months, though under the new Collective Bargaining Agreement, most now get paid over 12 months instead.

At the end of the day though, athletes are being paid for the time when they’re competing. We wanted to see how Hosszu’s one-week earning stacked up against the weeks-of-competition pay of different leagues.

If you take Hosszu’s $125,000 in prize money, and extrapolate it out over the length of different American sports seasons, you get:

To put that in real-world, tangible terms, that’s the equivalent of:

That’s pretty good company, and if there’s anyone in swimming who legitimately competes enough to start creeping into those numbers, it’s Hosszu.

She is the top-earning swimmer in the world right now, excluding endorsements (Michael Phelps, presumably, still leads that category). Some will throw their hands up in frustration at the above, saying that she deserves to be making as much as Lebron James or Albert Pujols or Peyton Manning or other superstars of the above sports. For now, though, that’s not a realistic goal – the economics of swimming just don’t exist yet to justify those kind of paychecks. Even at the World Cups where Hosszu won so much money, ticket sales probably didn’t cover even one World Record bonus for her.

There are a lot of things that would need to change about swimming for anybody to be earning upwards of $10 million a year, or for a bigger number of swimmers to sneak into the $1,000,000 range. That’s the subject for a different post.

What Hosszu is proving, however, is that when you participate consistently and perform consistently as a swimmer, there’s plenty of money to be made in swimming. Hosszu will have another few weeks before the World Cup starts up again and she has another chance to earn as much money, and that’s the key. There are certain weeks in the year where swimmers can make six figure paychecks, but there’s just not enough weeks in the year where those opportunities exist.

Expanding those opportunities is a little bit of a chicken-and-the-egg situation. The organizers, governing bodies, and sponsors need to create more of those opportunities. When USA Swimming finally added race-by-race prize money to its Grand Prix series for the 2012-2013 season, the number of weeks grew by about 6. All-told, there’s probably 15-18 weeks per year where athletes can earn this type of prize money.

But to attract the kind of attention, crowds, and event sponsors to warrant those kinds of prizes, athletes need to show up more consistently as well, and need to be ready to race consistently. Katinka Hosszu is doing a lot of interesting things, but by far her most revolutionary contribution to swimming is that she keeps showing up, week-after-week, and swimming well. Fans know that when they go to a meet expecting to see Katinka Hosszu, they’ll see Katinka Hosszu, they’ll see her often, and that they’ll see her swim out every final that she qualifies for. While she doesn’t go a best time at every meet, she’s prepared to race at every meet. If you go to a FINA World Cup event, you can expect that Hosszu will be there.

Hosszu is garnering a lot of attention for what she’s doing; hopefully, more-and-more athletes see what she’s accomplished and the kind of financial success she’s had and are encourage to participate at the same level. That’s when the momentum will build, and swimming could finally turn the corner into the big leagues.

Great post. I’d love to see more and more opportunities for swimmers to become financially successful through these sort of events.

Part of why she’s earning so much is because 85% (rough estimation) of THE high level swimmers (Olympians/world champ swimmers) are not at the World Cups. That makes the money more available for her. Granted she’d still make a lot. But if other fast swimmers swam at World Cups the money would be distributed much more widely and so the numbers for one swimmer wouldn’t be as staggering. Perhaps have World Cups be LCM to draw more swimmers because SCM doesn’t mean much in the realm of things (Olympic prep) especially for Americans But still congrats to Katinka for bringing in the cash.

Swam, I don’t think course makes much of a difference in September of 2014. Maybe other years and times of the year, but not now (explained later). Many countries have just gone through major championships, so the attendance from the biggest competitors is probably the biggest issue.

It is really smart of her. At her age, while she can do what she does, keep going to that well until it runs dry or people step up and race as much as she does and get that money.

I personally think too much is put into base training at this elite level and for that matter, what constitutes base training and the dreaded “extending taper” or “multiple tapers”. Race experience… Read more »

I may be wrong, but doesn’t athletics (track and field) compete for several weeks in Europe during the summer?

This article is totally non-sensical if you look closer at the details and what it takes to make the money Hosszu made. Those pro athletes from other sports get paid whether they play well or not. She’s breaking world records to get bonuses. Let’s just be honest and state as a matter of fact that pro swimmers DO NOT make the money other pro sport athletes make because they’d have to break multiple world records multiple times at multiple meets (i.e., which don’t exist at the moment throughout the year) in order to even get paid as close as other athletes. Now if you gave them “well-compensated” appearance fees and more events per year, then you could argue that they… Read more »

Just for comparison, an Olympic gold is worth a total of $100,000 from USA swimming/USOC. I think worlds golds are worth roughly $40k each.

So, barring endorsements (by NCAA rules), Missy earned (or should have earned if she can accept everything) about $250,000 in London and something around $150,000 in Barcelona.

Michael Phelps, who not only has been in the major professional spotlight for 11 years, but has been by far the best known swimmer for most of those, has a worth estimated up to $55million. Given the way endorsements work in Olympic years, he probably made at least 12mil… Read more »