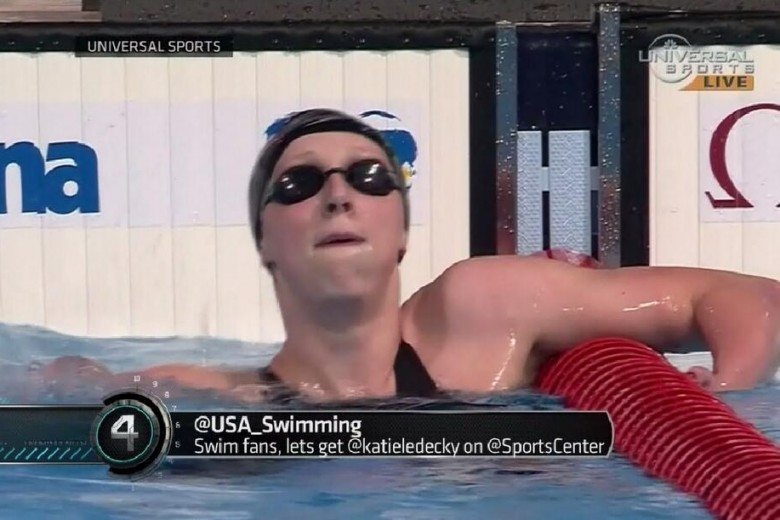 A very large campaign was launched via twitter yesterday to see Katie Ledecky in the top ten plays on ESPN Sport Center. After breaking the World Record in the 1500 freestyle by more than six seconds, Katie Ledecky took the fourth spot on the ESPN SportsCenter Top Ten Plays countdown.

SwimSwam, Dax Hill, and USA Swimming along with many others, were sending tweets and messages to SportsCenter asking them to add Ledecky’s World Record swim to their top 10 plays.

It is great to see swimming receiving mainstream recognition. Vlad Morozov, now swimming for Russia at the World Championships, swam at USC last year and made it in the top 10 plays in March for splitting 17.86 on USC’s 200 freestyle relay at the NCAA Championships. It is not often that you see swimmers recognized with football, baseball, basketball, and soccer players. It is exciting to see Katie Ledecky recognized for her outstanding performance.

As the sport grows, we will continue to see recognition from other mainstream media outlets, such as ESPN. The sport is growing, and ambassadors to the sport such as Michael Phelps, Ryan Lochte, Missy Franklin, Katie Ledecky, and Vlad Morozov are helping to bring more attention to the sport.

“Ask and you shall receive! @katieledecky was a no-brainer for the #SCtop10 tonight!”

USA Swimming received almost 1,200 RT’s and 150 favorites in their tweet asking swim fans to help get Ledecky onto SportsCenter.

Editor Note: We’ve recently learned that USA Swimming’s call to action on Twitter was followed up with some additional work from their communication’s department. USA Swimming also contacted ESPN producers, encouraging them to include Ledecky on SportsCenter’s Top 10 Plays.

OK, but each day I go to the ESPN website to see and nothing about swimming on the homepage in the headlines. Almost everything is about baseball players. 😥
It’s desesperating! If Katie was French, she would be everywhere! On the front page today of the sportspaper, invited yesterday evening in the television news, she would be the first subject in the news on the radio.

If she were Australian, this time next year she’d be the Prime Minister.

That’s just the sad reality in the US. The only time you see headlines for swimming is for either Phelps or Lochte and usually just for the big meets. If you just read the mainstream media in the US, most swimming news consists of whether or not Phelps is coming back.

They actually had a page will full coverage of the meet, pictures and text. Sure it was not the front page, but I give them credit. Sports Illustrated, on the other hand had bupkis that I could find.

My first thought exactly.:P Then again, those other sports simply have many more fans and followers so you can’t really blame commercial sports media serving them primarily.

More fans because they have been indoctrinated! 😡

Ashton Eaton breaking the decathlon world record last year was #9 or 10, I think. So I mean, it’s not as bad as that.

Ugh. That’s awful! Yes, that is much worse. It does seem like breaking a world record should be an automatic number one, esp in the DECATHLON!

The thing is it’s a quiet period right now for US sports as basketball and ice hockey seasons are over, golf and tennis don’t have any majors right now and the king of sports in the USA – NFL/college football doesn’t start until September. It’s only endless baseball and MLS at the moment.

as impressive as katie ledecky’s swim was there was no “wow, no she didn’t” factor that immediately shocks you onto your feet

3rd place was probably that waterskiing squirrel, 2nd was the dog-riding monkey and 1st was undoubtedly a routine pop-up in the 6th inning of the Red Sox game…