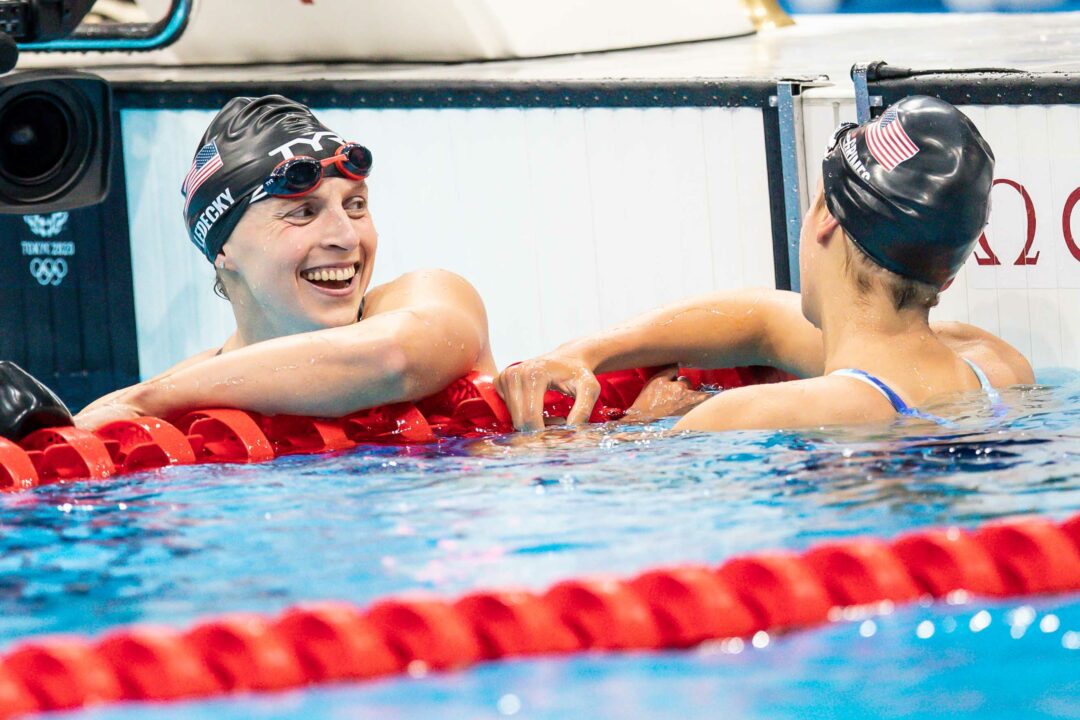 The stop is Ledecky's latest in media tour of New York City this week. Stock photo via Jack Spitser/Spitser Photography

Katie Ledecky is set to ring the New York Stock Exchange (NYSE) Closing Bell this afternoon at 4:00pm Eastern Time, NYSE announced this morning. The stop is Ledecky’s latest in media tour of New York City this week. Following her return from the Tokyo 2020 Olympics, Ledecky has made appearances on The Today Show, and The Tonight Show Starring Jimmy Fallon, wherein she’s discussed her Olympic experience.

Ledecky’s appearance this afternoon will be more ceremonial in nature. NYSE invites celebrities to ring the Closing Bell, which signifies the end of stock trading for the day, in order to celebrate some achievement. The opening and closing bells are largely symbolic at NYSE these days, since the vast majority of trading is now done electronically, rather than physically on the floor of the Exchange.

Katie Ledecky is now tied with Zimbabwe’s Kirsty Coventry and Hungary’s Krisztina Egerszegi for the most individual Olympic medals by a female swimmer of all-time (7). However, Ledecky does solely have the most individual Gold medals in women’s Olympic swimming history, coming in with 6. Her 10 overall Olympic medals make her one of the most decorated female Olympic swimmers of all-time, plausibly within reach of Americans Jenny Thompson, Natalie Coughlin, and Dara Torres, who are the most decorated women’s swimmers of all-time, with 12 medals apiece.

In Tokyo, Ledecky put on a historic performance, winning 2 Golds and 2 Silvers. Alongside the straight medal count, she became the first female to 3 consecutive Olympic Gold medals in the 800 free, and just the 3rd women’s swimmer all-time to win 3 consecutive Olympic Golds in a single individual event. She also became the first-ever women’s 1500 free Olympic Champion. In her individual Silver medal performance, which came in the 400 free, Ledecky still posted the 4th-fastest time of all-time in the race.

A little strange but whatever. Yay stonks.

I seem to recall Maya DiRado and Conor Dwyer doing this after Rio.

Isn’t it weird?
I disliked strongly Missy Franklin when she just finishing her college swimming career and not even yet finding a coach to train with for the coming WC spent most of her efforts on publicity flying F15.
I despised Hosszu’s patriotism-with-the-exit-through-the-gift-shop when after winning champion title in the world record time she rushed to the stands but not for the national flag, but for the cap with the “iron lady” logo and ran in it around the pool.
But at the same time I have no negative emotions about Ledecky’s post Olympic publicity tour. I really want her to be as much ahead with money earned as she was in the swimming competition.
And… Read more »

Worry about your own country.

I told you already my story, but there are some extra things for your information:
The place I was born at is Ukraine now. The country I immigrated from was USSR that doesn’t exist any more for 30 years already. My mother tongue was Surzhyk.
So, make the adjustments to your medal count procedure. I’m sure you will spend a lot of wonderful hours of doing that. Regards. 😀

You would slant toward Ledecky even if she had been up there in the F15 and Missy had been on Wall Street. No matter. Ledecky has the wins and individual medals. That is the criteria, same as golf which prizes victories and majors far above cash. Go to Golfwrx.com and see how many all-time debates on those forums say anything about dollars. Monetarily the big American winner from these Olympics will be Sydney McLaughlin. With her unique looks and appeal she is going to be featured in one commercial and ad campaign after another. McLaughlin was sharp enough to move to Los Angeles a year ago, to train under Bobby Kersee but also enable the public relations and entertainment base.

I don’t follow professional golf closely. But when I see the ranking based on money earned but not on medals or tournaments wins (and that is crucial for being invited to the major tournaments) then I’m thinking that this prize-awards system has to be carefully adjusted and controlled in order to not
cause conflicts.
Such a system in swimming is far away from perfection. For example most Hosszu’s big prize money came from the competition where the average qualification of the field wouldn’t even meet FINA’s “B” standards. And her performance wouldn’t qualify her for any major FINA meets. Only significantly later after paying Hosszu millions of dollars for practically nothing (just for the inconvenience of traveling and… Read more »

Everything about you is weird mate

Thank you for studying EVERYTHING about me. I really don’t deserve such attention. 😀

Yozhik should worry more about his Euro contingent:

Your responses never fail to make me laugh. Everyone gets so pressed and they downvote you for no reason and it’s really funny to witness

So, you want money earned to be the criteria for success but then you dislike KH for advertising her brand and herself to actually earn money…
Also, wasn’t KH the first swimmer to win $1 million in prize money?

Yes, that what is so peculiar about it. On the one hand being professional swimmer means by definition making leaving first of all and then only showing great results. In normally developed big Sports that is closely related things. But not in swimming. Missy Franklin made big money as professional swimmer not even making her feet wet in competitions for years. And there is another opposite example of the professional swimmer who swam a huge number of junk races earning with that a great deal of money. But what makes these two examples similar is the fact that in both cases no high quality of performance was required.
Maybe therefore I’m looking at Ledecky’s out of pool professional activities… Read more »

It’s not just Dara Torres and Jenny Thompson who have 12 Olympic medals in swimming: Natalie Coughlin, too!