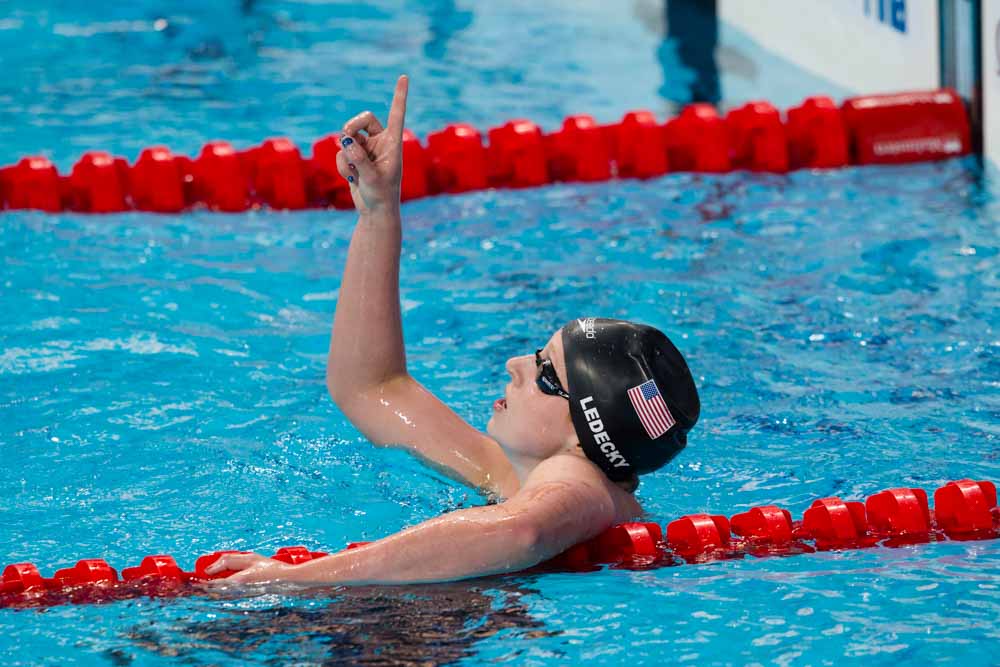 Katie Ledecky was the third youngest athlete on Forbes 30 Under 30 List. Current photo via Tim Binning/TheSwimPictures.com

Forbes recently came out with their Top 30 Athletes Under 30 List, and Katie Ledecky made the cut. Check out the article here.

In her brief bio it points out Ledecky became the first female to ever win four individual gold medals at the World Championships, and the first to sweep the 200, 400, 800 and 1500 freestyle at a World Championships. They also refer to her as “undoubtedly the most dominant female swimmer in the sport today.”

Ledecky is joined by some elusive company in the list, including NBA stars Steph Curry and Russell Westbrook, NHL stars Jamie Benn and Tyler Seguin, and professional golfer Jordan Spieth.

Ledecky is one of only four teenagers who made the list. At 18 years of age, she is the third youngest, with only 14 year-old Mo’one Davis (baseball) and 14 year-old Ashima Shiraishi (rock climbing) younger. She was also one of only seven women on the list.

Back in the summer of 2013, just after World Championships when most of the swimming world was still going gaga over Missy Franklin’s performance at that meet (six golds — to go with the four golds she won the previous year at the 2012 Olympics), I told a coach:

“Looking back from the year 2020, the person who will be recognized as the most dominant women swimmer of the decade (2010-2020) will undoubtedly be Katie Ledecky.”

He rolled his eyes and said, “We’ll see.”

By 2014, Ledecky’s WR performances at US nationals and PanPacs made my prediction seem obvious. Last summer’s Worlds at Kazan made it even more so.

Going to be quite a show in Rio! Our swimming talent depth will make Trials an “edge of the seat” event. Lots of hopes, dreams converging in Omaha in mere months.

And correct me if I’m wrong but I’ve learned she wasn’t even in the 12 nominees of Sports Illustrated to be sportsman/woman of the past year! 😯 First, weird when we know that these rankings by US sports websites or newspapers are generally very much focused on US athletes. Second, that’s really shameful. I don’t know what she could do more than what she did. Ok, you are not forced to put her first. In my opinion, and if you put the men and women in the same competition, the first place was between Ledecky and Djokovic with Serena third. Then I would have picked in that order Genzebe Dibaba, Stephen Curry, Ashton Eaton, Jordan Spieth and Usain Bolt. But… Read more »

I’d notice that Eurosport France and L’Équipe gave Manaudou the French athlete of the year last month. Kudos for French media care for swimming so much. Unfortunately, the US media…NO. Ledecky lost the USOC female athlete of the year to Biles. SI Sportman of the year to Williams, and she even didn’t get the nominee. She was fourth place at the athlete of D.C. choose by CSN midatlantic(try to guess who were in front of her?). At the end of January, FINA will announce Female swimmer of the year to Hosszu. I only hope she can take the James E. Sullivan Award this year(she lost this amateur award last year, tell me who is the biggest star go to Rio… Read more »

To me, I try to think back to when Janet Evans was swimming and what kind of recognition she had while swimming during her prime years. I unfortunately can’t do this, because I was too young to know what exactly was going on at that time. If someone could comment on it and shed some light as to how well received Evans was during that time, we could compare it to Ledecky now. I did email one of the local sports talk radio hosts here in Houston about Serena winning SI Sportsman of the year and I mentioned what Ledecky has done and he agreed that she should be up for consideration.

I remember Janet Evans was big news during the 1988 Olympics. Outside the Olympics I don’t remember hearing about her.

At the 1996 Olympics in Atlanta, Janet Evans took the Olympic Torch the final leg in the stadium, climbed the stadium steps to the top right next to the flame . . . and at the last minute passed it off to Muhammed Ali who lit the flame. That was a huge deal (and a big honor her)!

reply for YEARS OF PLAIN SUCK, it was truly an honor for athlete become a Olympic Torch bearer. If DC remain submit bids to 2024 Olympic and settle as host, I’m sure Katie will swim until then, and will no doubt become the last leg and lit the Olympic Cauldron. Hope Katie has a chance in the future.